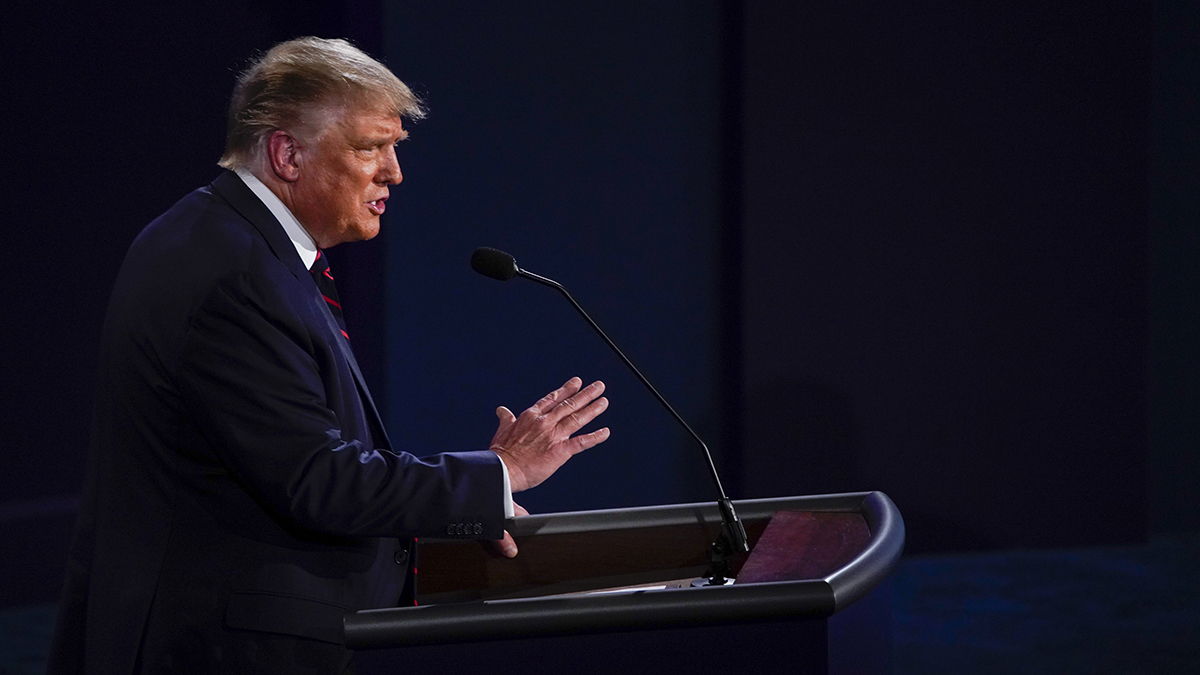 Philadelphia got an unwelcome shoutout from President Trump at Tuesday night’s first Presidential debate, the kind of saying that sticks around.

Actually, the whole quote is this: “As you know today there was a big problem,” Trump said. “In Philadelphia, they went in to watch. They are called poll watchers. They are very safe, very nice thing. They were thrown out. They weren’t allowed to watch. You know why? Because bad things happen in Philadelphia. Bad things.”

Earlier in the day, the president had tweeted that poll watchers were not allowed into “voting places” in Philadelphia.

Actually, seven locations that opened in Philadelphia Tuesday were not polls or voting places. They are satellite election offices, where city residents can register to vote, pick up an application for a mail-in ballot and complete and drop off that ballot.

Those ballots are kept until they are allowed to be opened with all other mail-in ballots in Pennsylvania, whether mailed in or dropped off at ballot drop boxes.

“The Satellite Offices are not Polling Places,” said Nick Custodio, deputy commissioner in the office of Philadelphia Commissioner Lisa Deeley. That office oversees elections in the city.

“Poll watcher certificates have not been issued for any individuals for anything other than poll watching activities on Election Day at Polling Places,” Custodio’s statement said. “Individuals who are not seeking to receive services from a Satellite Office are not permitted to be there for other purposes. This is particularly important in the current environment as City buildings and offices remain closed to the public due to COVID-19.”

That said, the satellite voting locations did have problems Tuesday. At all seven, a technical issue halted operations there for several hours. The problem was a state system that was down for some time.

By 1:30 p.m. Tuesday, six of the seven locations were back online, Managing Director Tumar Alexander said.

“It’s the first day, so it’s not uncommon for tech to go down on day 1,” Mayor Jim Kenney said.

Tuesday marked the first time voters in Philadelphia could file a mail-in ballot in person at a designated satellite voting center. But glitches in the system caused a two-hour delay and it could be an indication of problems to come. NBC10’s Claudia Vargas has the details

Tuesday morning at Temple University’s Liacouras Center, City Council President Darrell Clarke filled out his ballot and filed it in the drop box.

He was one of two people who filed their ballot before the system issue stopped more ballots from coming in.

The satellite locations are a new option for voters in what is already an unusual election year.

“This is all new,” said Commissioner Lisa Deeley, chair of the board of city commissioners that handle elections in the city and approved the use of the satellite sites. “Every piece of this is new so we’re asking people in Philadelphia to please be patient and recognize it’s your first time doing this – it’s our first time too.”

The sites around the city are at schools, City Hall and the Liacouras Center at Temple University, with more sites expected later.

At the City Hall site NBC10 visited for a preview on Monday, hand sanitizer is stationed at the door. Deeley said someone will be there to remind voters to wear a mask. At a nearby table, mail-in ballot applications were available, though voters can also print them out at home. To fill out the form, voters will need to know the last four numbers of their social security number or their Pennsylvania driver’s license or ID. Voters can also register to vote at the site if they have not already done so.

Philadelphia voters are able to go to any of 7 mail-in-voting sites opening Tuesday and there could be more added later. NBC10’s Lauren Mayk went inside the site at City Hall to see how this new way to vote will work.

Deeley said Philadelphia voters who already applied for a mail-in ballot are asked not to come to the sites to get a ballot, but instead wait for their ballot to arrive at home. Once the voter fills out that ballot, they can put it in the mail or drop it off at one of the satellite sites.

Queues were set up in the hallway with social distancing reminders on the floor.

When voters reach the elections office, they will hand in their application and receive a printed ballot, which they can fill out at a small table with privacy walls. Both at home and at the sites, Deeley reminded voters they need to use both envelopes, putting their ballot first in a white privacy envelope, then putting that envelope inside an outer envelope provided, and signing and filling out the information requested on that outer envelope.

Deeley said the ballots will be held in a secure location until election officials are allowed to open and begin counting them, which under current Pennsylvania law is not until the morning of Election Day. Governor Tom Wolf and some county elections officials, including Deeley, have urged the state legislature officials to begin the process of dealing with mail-in ballots earlier to speed up the counting process, but no deal has been reached.

NBC10’s Randy Gyllenhaal has the information Philadelphians need as they can begin dropping off mail-in ballots at seven different city sites starting Tuesday. You can also request a ballot at the locations leading up to Election Day.

The satellite offices give voters another choice for how to participate in the November elections.

Brooke Stello from South Philadelphia said she plans to vote by mail this year.

“I feel safest at home so I’m going to take those precautions,” Stello said.

But other voters, including Melicia Edmunds, said they feel more comfortable voting at the polls on Election Day.

“I’m just confident – more confident – that things won’t be mixed up and lost. That they’ll be valid and secure,” Edmunds said.

Johnnie Bradley said he plans to vote in person on Election Day, but offered:

“I think whichever way you do it, as long as you vote.”

At these locations, voters can:

Here is a map of the locations: