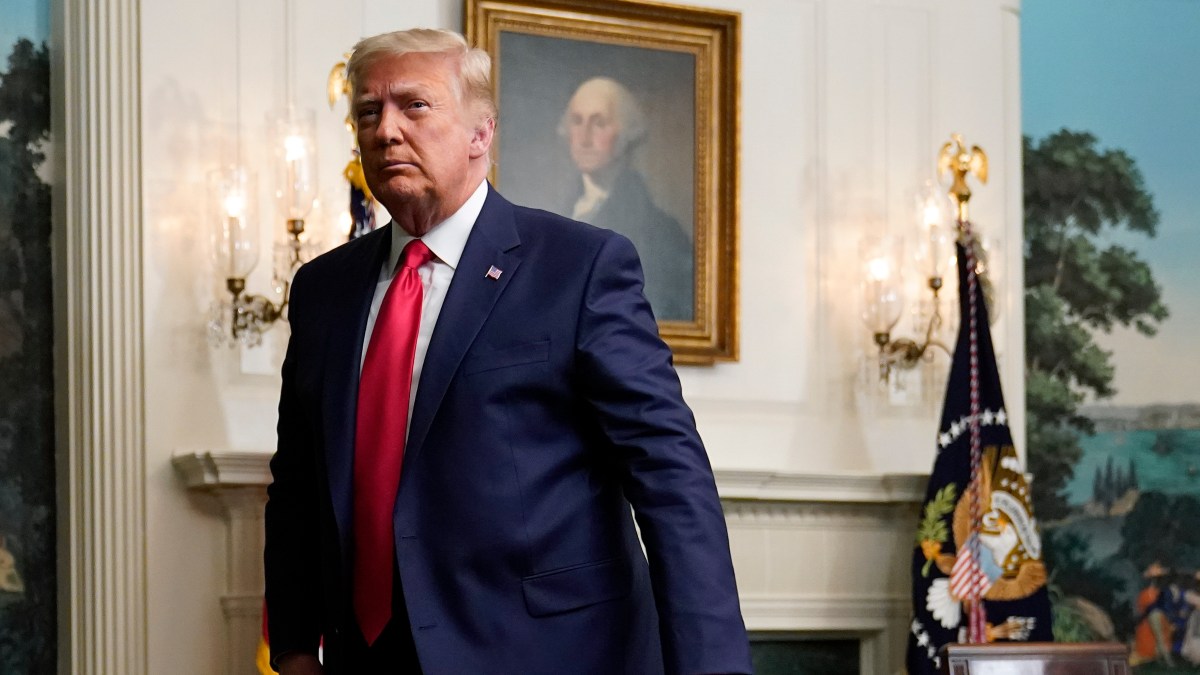 President Donald Trump said Thursday that he will leave the White House if the Electoral College formalizes President-Elect Joe Biden’s victory — even as he insisted such a decision would be a “mistake” — as he spent his Thanksgiving renewing baseless claims that “massive fraud” and crooked officials in battleground states caused his election defeat.

“Certainly I will. But you know that,” Trump said Thursday when asked whether he would vacate the building, allowing a peaceful transition of power in January. But Trump — taking questions for the first time since Election Day — insisted that “a lot of things” would happen between now and then that might alter the results.

“This has a long way to go,” Trump said, even though he lost.

The fact that a sitting American president even had to address whether or not he would leave office after losing reelection underscores the extent to which Trump has smashed one convention after another over the last three weeks. While there is no evidence of the kind of widespread fraud Trump has been alleging, he and his legal team have nonetheless been working to cast doubt on the integrity of the election and trying to overturn voters’ will in an unprecedented breach of democratic norms.

Trump spoke to reporters in the White House’s ornate Diplomatic Reception Room after holding a teleconference with U.S. military leaders stationed across the globe. He thanked them for their service and jokingly warned them not to eat too much turkey, then turned to the election after ending the call. He repeated grievances and angrily denounced officials in Georgia and Pennsylvania, two key swing states that helped give Biden the win.

Trump claimed, despite the results, that this may not be his last Thanksgiving at the White House. And he insisted there had been “massive fraud,” even though state officials and international observers have said no evidence of that exists and Trump’s campaign has repeatedly failed in court.

Trump’s administration has already given the green light for a formal transition to get underway. But Trump took issue with Biden moving forward.

“I think it’s not right that he’s trying to pick a Cabinet,” Trump said, even though officials from both teams are already working together to get Biden’s team up to speed.

Weeks after election day, the Trump administration has lifted the main road block that prevented official transition efforts of President-elect Joe Biden and his team. While insisting his legal challenges aimed at overturning the election results continue and he believes he will prevail, President Trump gave the green light to Emily Murphy, the controversial head of the General Services Administration, to cooperate with Biden’s transition team.

And as he refused to concede, Trump announced that he will be traveling to Georgia to rally supporters ahead of two Senate runoff elections that will determine which party controls the Senate. Trump said the rally for Republican Sens. David Perdue and Kelly Loeffler would likely be held Saturday. The White House later clarified he had meant Dec. 5.

One of the reasons Republicans have stood by Trump and his baseless claims of fraud has been to keep his loyal base energized ahead of those runoffs on Jan. 5. But Trump, in his remarks, openly questioned whether that election would be fair in a move that could dampen Republican turnout.

“I think you’re dealing with a very fraudulent system. I’m very worried about that,” he said. “People are very disappointed that we were robbed.”

As for the Electoral College, Trump made clear that he will likely never formally concede, even if he said he would leave the White House.

President Donald Trump issued a presidential pardon to Iowa turkeys Corn and Cob on Tuesday. The duo will spend their retirement at Iowa State University to educate people on the state’s turkey industry.

“It’s gonna be a very hard thing to concede. Because we know there was massive fraud,” he said, noting that, “time isn’t on our side.”

“If they do,” vote against him, Trump added, “they’ve made a mistake.”

Asked whether he would attend Biden’s inauguration, Trump said he knew the answer but didn’t want to share it yet.

But there were some signs that Trump was coming to terms with his loss.

At one point he urged reporters not to allow Biden the credit for pending coronavirus vaccines. “Don’t let him take credit for the vaccines because the vaccines were me and I pushed people harder than they’ve ever been pushed before,” he said.

As for whether or not he plans to formally declare his candidacy to run again in 2024 — as he has discussed with aides — Trump said he didn’t “want to talk about 2024 yet.”

All states must certify their results before the Electoral College meets on Dec. 14, and any challenge to the results must be resolved by Dec. 8. States have already begun that process, including Michigan, where Trump and his allies tried and failed to delay the process, and Georgia and Pennsylvania.

Vote certification at the local and state level is typically a ministerial task that gets little notice, but that changed this year with Trump’s refusal to concede and his unprecedented attempts to overturn the results of the election through a fusillade of legal challenges and attempts to manipulate the certification process in battleground states he lost.

Biden won by wide margins in both the Electoral College and popular vote, where he received nearly 80 million votes, a record.