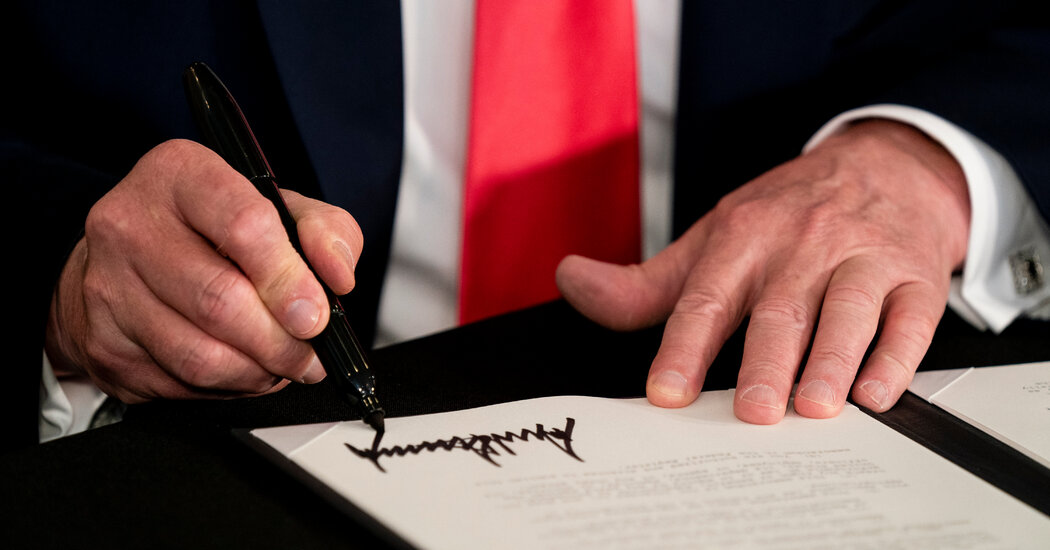 As the U.S. economy careens toward disaster, congressional talks about what to do appear to have ground to a halt. So on Saturday President Trump — speaking at one of his golf courses, of course — announced four executive measures that, he claimed, would rescue the recovery.

Unfortunately, one of the measures was vacuous, one trivial and one unworkable. And the fourth may do substantial harm.

The unworkable measure supposedly provides new aid to the unemployed, who have lost pandemic benefits because Senate Republicans don’t want to provide them; but the announced program would be an administrative nightmare that might take a long time to put into effect and would require partial matching funds that strapped states don’t have. Remember, states had a very hard time implementing the first round of aid to the unemployed, leaving millions in the cold for many weeks. This would be worse.

But the really substantive measure would direct employers to stop collecting payroll taxes on behalf of their workers.

This is pretty wild stuff from a legal and constitutional point of view. Can presidents just stop collecting duly legislated taxes whenever they feel like it? But put the law to one side and ask, what’s this all about? Who thinks a payroll tax cut, even if enacted through due process, would solve any of the problems we face?

No reputable economist I know considers a payroll tax cut a good idea. Even if the money went to workers, which it almost certainly wouldn’t, it would go to precisely the wrong ones — workers who haven’t lost their jobs in the pandemic, not those who have. It wouldn’t encourage hiring, because what’s holding employers back isn’t cost, it’s the shutdown of activities with a high risk of infection (like indoor dining).

Now, lots of bad economic ideas — like giant tax cuts for the rich — nonetheless have strong political support. But a payroll tax cut isn’t one of them. In fact, Senate Republicans have been dismissive, dropping the idea from their proposals.

Yet there it is, the apparent centerpiece of Trump’s new plan. What’s going on?

The answer is that a payroll tax cut is the hydroxychloroquine of economic policy. It’s a quack remedy that somehow caught Trump’s eye, which he won’t give up because sycophants keep telling him he’s infallible. There may be some ulterior motives — this move might end up undermining the finances of Social Security and Medicare — but that’s all secondary. Basically this is a tantrum from a president temperamentally incapable of owning up to his own mistakes.

I’m not sure who first sold Trump on this bad idea. Its most tireless advocate has been Stephen Moore, who has a history of predicting tax-cut miracles — remember how Kansas was going to be the wonder of the world? — that never pan out. Just a few days ago Moore argued publicly that Trump could slash taxes without congressional authorization; and here we are.

Just to be clear, Trump isn’t actually cutting the payroll tax, which would require legislation. Instead, he’s just deferring its collection; workers will still owe the money a few months later. And knowing this, many if not most employers won’t increase paychecks, they’ll just put the money in escrow on workers’ behalf. As far as most workers are concerned, this whole thing may be a nonevent.

But maybe, just maybe, Trump will both win in November and find a way to retroactively cancel those tax obligations. If so, he’ll tear a big hole in the finances of Social Security and Medicare, programs that, whatever he may say, he has always wanted to kill.

The main point, however, is that we’re facing a moment of crisis. The emergency relief that sustained the U.S. economy through the coronavirus has expired, even though the pandemic is still very much with us. Unless very quick action is taken, consumer spending is about to collapse, bringing the whole economy down with it.

This wasn’t hard to see coming. Indeed, Democrats passed legislation to deal with this situation almost three months ago. But Senate Republicans did nothing, and still haven’t gotten serious about proposing remedies.

This would be a really good time for presidential leadership. But what we have instead is a pitchman hawking miracle cures at his country club. In the process he may well have undermined whatever slim chance there was of reaching an even halfway decent deal to avert disaster.

As I said, I don’t think there’s any deep game here. Yes, Trump’s intentions are bad. But recent interviews and inside reporting make it clear that he really is completely out of his depth, with no understanding of either the epidemiological or the economic reality we face.

At a moment of crisis America is cursed with a president who is incompetent, deeply ignorant, yet so personally insecure that he surrounds himself with people who tell him he’s a universal genius.