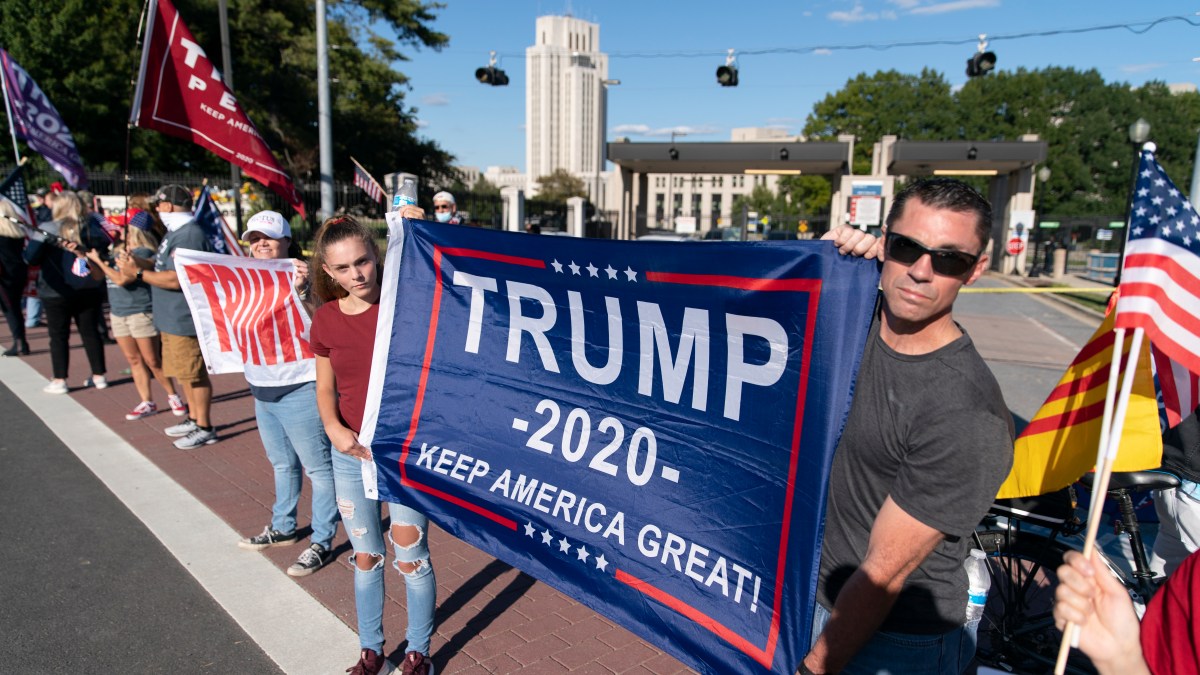 Supporters sending well-wishes to President Donald Trump, who has COVID-19, gathered outside Walter Reed Hospital on Saturday to wish the country’s most prominent patient a speedy recovery.

Dozens of people stood outside the hospital waving Trump 2020 flags and holding signs on Saturday evening.

Police moved demonstrators across the street and both directions of Rockville Pike were shut down outside Walter Reed about 8 p.m. as police investigated a suspicious package outside. Police cleared the package and allowed Trump supporters to go back to the hospital gate a couple of hours later. Rockville Pike has reopened.

“This is not about – it’s not about race. It’s not about your political affiliation, right, it’s about … being [patriotic]. We are all American. We are standing behind you,” one man told News4’s Darcy Spencer.

“The country needs him. The world needs him too,” a woman said.

“I think people should just put everything aside and just wish him better because coronavirus is a very dangerous virus and he’s an elderly man. So, everyone should just pray for his safety and pray for that he makes it out of this safely,” one man said.

A group of supporters of former Vice President Joe Biden could be seen demonstrating across the street from the hospital.

News4’s Darcy Spencer reports demonstrations were largely peaceful in the afternoon aside from an argument between a Trump supporter and someone carrying a Black Lives Matter sign.

NBC News reporter earlier in the day that tensions grew at one point when anti-Trump protesters arrived.

A minor physical altercation broke out between a supporter of Trump who was not wearing a mask and an anti-Trump protester outside the hospital, according to NBC News. No arrests were reported.

A handful of supporters arrived outside the hospital before 9 a.m. to show their support with a Trump 2020 campaign flag and an American flag.

The supporters that came early on a cool fall morning were fewer in number than the crowd that gathered Friday night as Marine One touched down to bring the president for treatment.

As a mask-clad President Trump stepped off Marine One, a crowd of onlookers rushed to the gates of Walter Reed to get a glimpse of the moment Trump, who has downplayed the severity of the pandemic, went to the hospital for treatment. The White House says his symptoms include a low-grade fever and fatigue.

Many in the crowd weren’t wearing masks, although Montgomery County, where Walter Reed is located, mandates almost everyone wear face coverings in public.

On Saturday, face coverings appeared more common, but many attendees still went without — and it became an issue between the president’s supporters and anti-Trump people in the crowd.

“We can’t hear you, you might want to take your mask off, come on,” a Trump supporter shouted into a megaphone, NBC News reported.

The president was visible for only a few moments as he stepped into a waiting SUV. Those seconds made the trip to Bethesda, Maryland, worthwhile for some of his supporters.

“He’s our president, he’s our boss, we are coming here to support him,” one supporter in a camouflage Trump cap said.

Curiosity brought the Banwait family out.

Veer, a 7th grader, is learning about the U.S. government in school right now.

“It was cool to know, to see all this happen in real-time. But then again, I don’t want bad for anyone,” he said.

For Veer’s mom, Kiran Banwait, seeing the president walk of Marine One under his own power is a good sign — and seeing him wear a mask sends a much-needed message.

The White House says the president remains in charge and Walter Reed offers everything he will need to recover from COVID-19 and continue to work. That includes living space, an office for his chief of staff and medical facilities.

Trump also has people like Dorian praying for a speedy recovery.

“He’s going to be ok because God’s in control. I’m sending prayers his way,” she said.