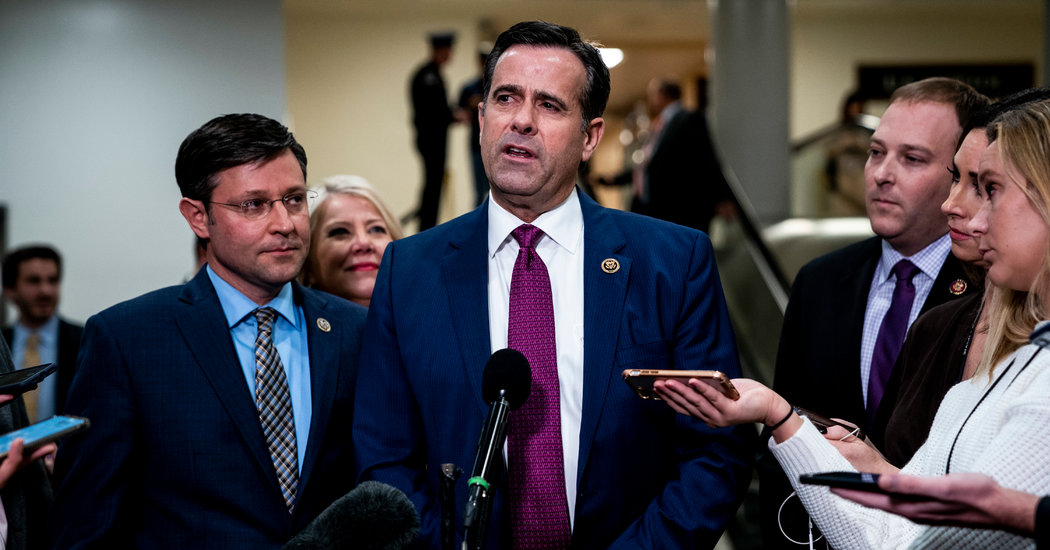 WASHINGTON — President Trump announced on Friday that he intended to nominate Representative John Ratcliffe, Republican of Texas, as his director of national intelligence, choosing someone he considered last summer before senior Republicans in Congress deemed him unqualified for the job.

Mr. Ratcliffe is a vocal supporter of the president who serves on the House Intelligence Committee. If confirmed, he would replace Richard Grenell, whom Mr. Trump put in charge of American intelligence agencies this month on an acting basis. The job has been vacant since Dan Coats stepped down on Aug. 15.

I am pleased to announce the nomination of @RepRatcliffe (Congressman John Ratcliffe) to be Director of National Intelligence (DNI). Would have completed process earlier, but John wanted to wait until after IG Report was finished. John is an outstanding man of great talent!

It is unclear whether Mr. Ratcliffe could be confirmed by the Senate. When Mr. Trump floated his name for the job last summer, some Republicans, including Senator Richard M. Burr of North Carolina, the chairman of the Senate Intelligence Committee, told White House officials that Mr. Ratcliffe was too partisan for the position, according to people familiar with the discussions.

Members of both parties also expressed concern at the time about his qualifications for such a senior position, as well as charges that he had exaggerated his résumé.

But just nominating Mr. Ratcliffe creates a benefit for the White House: Once Mr. Trump sends formal nomination papers to the Senate, it will extend the time the current acting director, Mr. Grenell, a favorite of Mr. Trump’s, can remain in the office. And in the minds of some Democrats, that was the president’s goal at a time when he is seeking to impose greater control over the nation’s intelligence agencies after years of tension that started with the intelligence community’s consensus that Russia had interfered in the 2016 election to help Mr. Trump.

Under the Federal Vacancies Reform Act, Mr. Grenell can serve in his post only until March 11 unless the president formally nominates someone else for the job. Under that law, Mr. Grenell would be able to stay an additional 210 days once Mr. Ratcliffe is nominated. Should the Senate reject Mr. Ratcliffe, Mr. Grenell’s tenure would be extended again.

Some people close to the White House said they believe Mr. Ratcliffe stands a better chance at confirmation now than he did last summer. They said his robust defense of Mr. Trump during the House’s impeachment proceedings and effective questioning of Democratic witnesses had impressed senators who had expressed concerns about him, including Mr. Burr.

One senior administration official said the situation was “different” than it was with Mr. Ratcliffe in July, but also conceded that Trump officials were “cleareyed” about earning the needed votes.

On Friday, Mr. Burr issued a lukewarm statement that stopped short of endorsing Mr. Ratcliffe for the position but signaled impatience with having an acting director in the position.

Mr. Burr wrote that “there is no substitute for having a permanent, Senate-confirmed director of national intelligence in place to lead our I.C.” I.C. is Washington shorthand for “intelligence community.”

“I look forward to receiving Congressman Ratcliffe’s official nomination and ushering it through the Senate’s regular order,” he added.

Senior Democrats said they were decisively opposed to the nomination.

“The last time this nomination was unsuccessfully put forward, serious bipartisan questions were raised about Rep. Ratcliffe’s background and qualifications,” Senator Mark Warner, Democrat of Virginia and the vice chairman of the Senate Intelligence Committee, wrote on Twitter. “It’s hard for me to see how anything new has happened to change that.”

The Senate Democratic leader, Chuck Schumer of New York, said in a statement, “Replacing one highly partisan operative with another does nothing to keep our country safe. At a time when the Russians are interfering in our elections, we need a nonpartisan leader at the helm of the intelligence community who sees the world objectively and speaks truth to power, and unfortunately neither Acting Director Grenell nor Rep. Ratcliffe comes even close to that.”

Mr. Schumer added that the nomination reveals Mr. Trump’s “lack of respect for the rule of law and the intelligence community” and called on Republicans to “join Democrats in swiftly rejecting the nomination of Mr. Ratcliffe.”

The position of director of national intelligence, created by a special commission in the aftermath of the September 11, 2001, attacks, was designed to oversee and coordinate the federal government’s sprawling intelligence network, which includes the Central Intelligence Agency, the Defense Intelligence Agency and more than a dozen smaller agencies.

Writing on Twitter Friday, Mr. Trump called Mr. Ratcliffe “an outstanding man of great talent,” adding: “Would have completed process earlier, but John wanted to wait until after IG Report was finished.”

Mr. Trump appeared to have been referring to a recent report by the inspector general of the Justice Department that criticized aspects of the federal investigation into ties between Mr. Trump’s 2016 campaign and Russia.

Mr. Trump’s previous plan to nominate Mr. Ratcliffe, unveiled in July, ran aground amid questions about the depth of his intelligence experience, his outspoken pro-Trump partisanship, and apparent exaggerations about his biography.

Mr. Trump initially defended his pick, telling reporters he needed someone to rein in intelligence agencies that “have run amok.” But he dropped the plan within days, before Mr. Ratcliffe was formally nominated, accusing the media of “slander and libel.”

Mr. Ratcliffe also drew criticism for claiming on his website and campaign material that, as a federal prosecutor, he had tried suspects who were accused of funneling money to the Hamas terrorist group. Mr. Ratcliffe was involved in investigating side issues related to an earlier mistrial, but was not a prosecutor in the original or second trial.

While Mr. Ratcliffe often touted his role as the U.S. attorney for the Eastern District of Texas during the George W. Bush administration, he held that position only on an interim basis, bridging a gap of less than a year between two Senate-confirmed presidential appointees. And there are few if any significant terrorism cases in the public record for his time serving as the terrorism coordinator in the eastern district office.

Republican senators also fretted that as a fiery member of the House Intelligence panel and one of the House’s most conservative members, Mr. Ratcliffe was too political to take the top intelligence position. Those concerns may soon resurface, especially given Mr. Ratcliffe’s high-profile role defending Mr. Trump during the House’s impeachment proceedings.

It is that same fiery streak, however, that has endeared Mr. Ratcliffe to his fellow House conservatives and Mr. Trump. He was a vocal figure in House hearings during the impeachment fight, brooking no criticism of the president and forcefully arguing for an investigation into the anonymous whistle-blower whose complaint about the president’s actions toward Ukraine helped prompt the inquiry.

Mr. Ratcliffe then served on a team of House lawmakers who helped amplify Mr. Trump’s legal defense during the impeachment trial in the Senate.

Mr. Grenell, the acting director, offered his congratulations to Mr. Ratcliffe on Friday on Twitter, adding, “We are ready for you and grateful for your willingness to serve.”