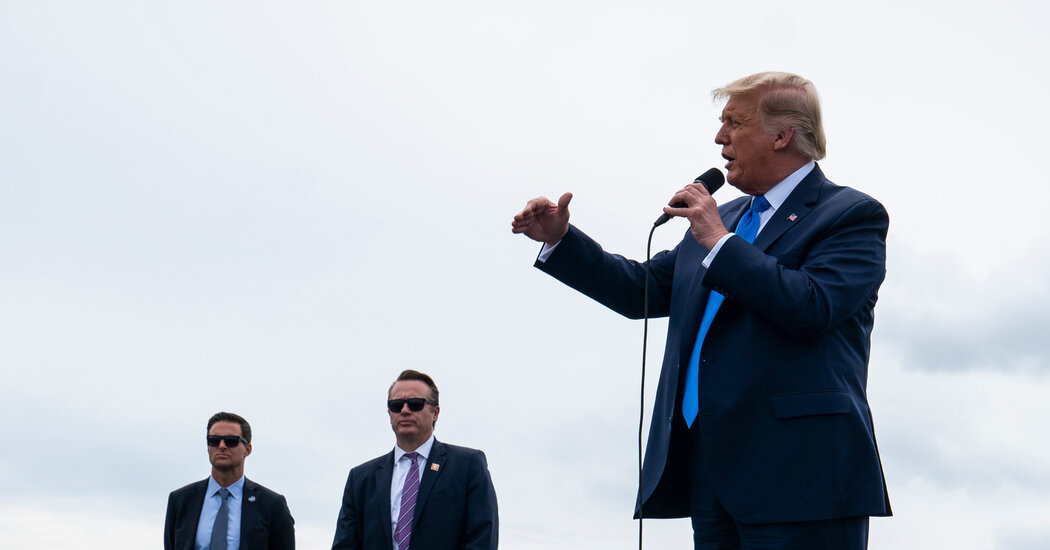 President Trump on Tuesday won another delay in the long-running legal battle over whether he must turn over eight years of tax returns to the Manhattan district attorney’s office, which subpoenaed them a year ago in a criminal investigation focused on Mr. Trump, his business and his associates.

In a brief order, a federal appeals court in New York said it would temporarily block a grand jury subpoena issued by the district attorney, Cyrus R. Vance Jr., a Democrat, while it considers Mr. Trump’s arguments that the request was “wildly overbroad” and politically motivated.

The ruling is the latest development in the president’s aggressive effort to keep his tax returns and other financial records out of the hands of prosecutors, Congress and others — a dispute that has reached the United States Supreme Court once and is likely to end up there again.

With the election looming, the ruling means that as a practical matter the prosecutors, even if they are ultimately successful, will not receive Mr. Trump’s records for at least another month, and perhaps longer if he seeks a review in the Supreme Court.

Mr. Vance’s office has suggested in court papers that it has been investigating hush-money payments made shortly before the 2016 presidential election to two women who claimed they had extramarital affairs with Mr. Trump, as well as possible financial and insurance fraud by the president and his business, the Trump Organization, whose headquarters are in Manhattan.

A year ago, Mr. Trump sued in federal court to block Mr. Vance’s subpoena for his tax records, which was issued to his accounting firm, Mazars USA, arguing before a Manhattan judge that a sitting president was immune from criminal investigation.

After months of litigation, the Supreme Court in July rejected Mr. Trump’s claim of blanket immunity by vote of 7 to 2, but said the president could return to the lower court and raise objections on other grounds, like the scope and relevance of the subpoena.

Mr. Trump’s lawyers went back before the Manhattan judge, Victor Marrero of Federal District Court, and argued that the subpoena was issued in bad faith and was “so sweeping that it amounts to an unguided and unlawful fishing expedition into the president’s personal financial and business dealings.”

Mr. Vance’s office, in turn, has repeatedly accused Mr. Trump of using delay tactics, raising the chance that the time limit for charging possible crimes will expire. In effect, such delay may grant the president the kind of immunity that the Supreme Court said he was not entitled to, prosecutors have argued.

“Each day that compliance with the Mazars subpoena is delayed increases the likelihood that the grand jury will not receive the documents it sought ten months ago in a timely fashion,” the district attorney wrote in court papers.

Late last month, Judge Marrero rejected the president’s latest arguments in a 103-page decision, and also denied his request for an emergency stay to temporarily block Mr. Vance from enforcing the subpoena while the president appealed the decision.

Mr. Trump’s lawyers immediately sought a stay from the U.S. Court of Appeals for the Second Circuit, arguing that the president’s returns should not turned over before the appellate judges could consider the substance of Mr. Trump’s appeal.

At the time, Mr. Trump told reporters that the district attorney’s investigation was “a continuation of the witch hunt, the greatest witch hunt in history.”

Mr. Vance’s office, writing to the appeals court last week, again said that the president had engaged in a “nearly yearlong effort to frustrate compliance with a lawful subpoena.”

Jay Sekulow, a lawyer for Mr. Trump, said in a statement on Tuesday that he was pleased the Second Circuit granted the stay and that “we look forward to arguing the merits on appeal.” A spokesman for Mr. Vance declined to comment.

During the 2016 campaign, Mr. Trump promised to make his tax returns public, as presidential candidates have done for at least 40 years. But then he refused to release them, citing an ongoing audit as the reason.

Every sitting president’s returns are routinely audited, and the I.R.S. has long said that nothing prevents any individual from making tax returns public while an audit is underway.

The ruling on Tuesday came several hours after oral arguments before a three-judge panel of the appeals court and covered only the narrow issue of the temporary stay — whether Mr. Vance should be able to immediately obtain the tax records from Mazars, the accounting firm.

Another lawyer for Mr. Trump, William S. Consovoy, argued in court that if the tax returns were turned over to prosecutors, there would be no way to undo the harm to the president.

“The status quo is irrevocably altered once those documents are disclosed, even to the district attorney,” Mr. Consovoy said, “because, you know, quite obviously you can’t make them forget what they learned. You can’t unring that bell.”

Carey R. Dunne, Mr. Vance’s general counsel, defended the wide-ranging nature of the grand jury subpoena. Prosecutors are seeking records from Mr. Trump’s business holdings in places as far away as Dubai, India and the Philippines, a request Mr. Trump’s lawyers have complained is too broad.

“There’s lots of international financial activity over which we have jurisdiction every day,” Mr. Dunne said. “And this is not unusual in a subpoena like ours, even more so, if, as here, the company at the center of all that international activity has its headquarters in Manhattan.”