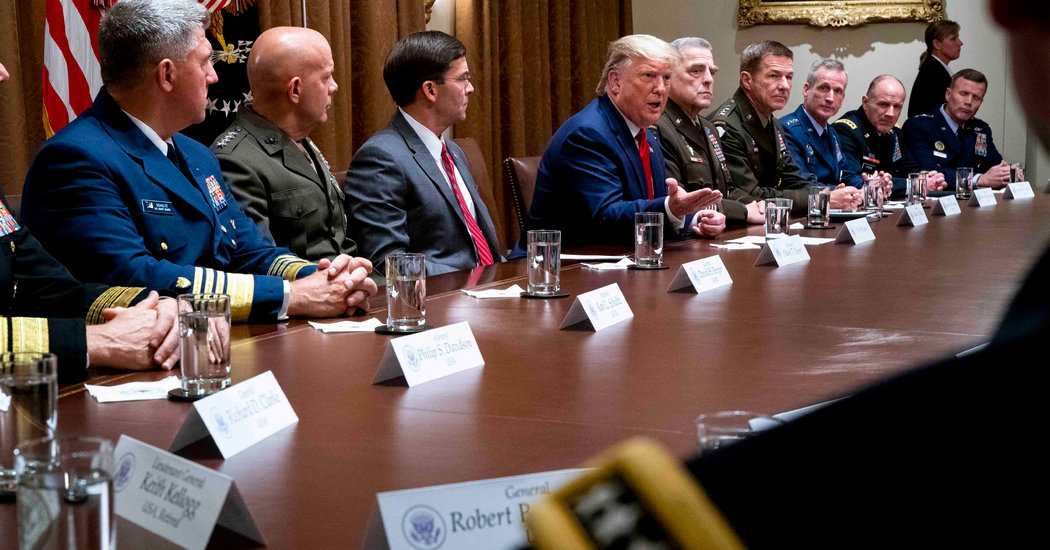 WASHINGTON — President Trump vetoed a Senate resolution on Wednesday that would have required him to seek congressional authorization before taking military action against Iran, rejecting a rare effort by the chamber to curb his authority and reasserting broad power to use military force.

In a statement released by the White House, Mr. Trump portrayed the measure as not only an encroachment on his presidential powers but also a personal political attack.

“This was a very insulting resolution, introduced by Democrats as part of a strategy to win an election on November 3 by dividing the Republican Party,” the president said. “The few Republicans who voted for it played right into their hands.”

The resolution was mostly symbolic and not legally binding. And Congress does not stand much of a chance of reversing the veto because the measure passed well short of the two-thirds supermajority needed for an override.

The resolution was introduced by Senator Tim Kaine, Democrat of Virginia, on Jan. 3, hours after Mr. Trump ordered a missile strike that killed a senior Iranian military commander, Maj. Gen. Qassim Suleimani, in Iraq. It directed Mr. Trump to “terminate the use of United States armed forces for hostilities against the Islamic Republic of Iran or any part of its government or military, unless explicitly authorized by a declaration of war or specific authorization for use of military force against Iran.”

In a statement after Mr. Trump’s veto, Mr. Kaine noted that the president had pledged to stop “endless wars,” and said that “instead of following through on his word, President Trump vetoed legislation that would help avoid unnecessary war in the Middle East.”

“Unless there’s a carefully reached consensus in Congress that war is necessary, we should not be sending our troops into harm’s way,” Mr. Kaine added.

Congress and the White House have argued for decades about how much unilateral authority a president should have to take military action, with the balance increasingly shifting toward the commander in chief — particularly in the post-9/11 era. Recent presidents have argued that threats from terrorists and rogue states do not allow for congressional consultation and deliberation.

In his statement, Mr. Trump argued that Congress had overstepped its bounds, saying that the resolution “implies that the president’s constitutional authority to use military force is limited to defense of the United States and its forces against imminent attack.”

“That is incorrect,” he added.

That was an apparent reference to the resolution’s stipulation that it should not be “construed to prevent the United States from defending itself from imminent attack,” a concession that in rare cases presidents may have act to swiftly — although the proper definition of “imminent” has itself been subject to fierce debate in recent years.

Mr. Trump has argued that he ordered the killing of General Suleimani to protect Americans in the Middle East from imminent attacks that he said the Iranian general was actively plotting, although other administration officials sidestepped that claim.

A memo the White House sent to Congress in February said the strike was a response to past Iranian attacks on Americans, and was intended to deter future ones. The administration cited as a legal basis Congress’s 2002 authorization of military force, which was passed to allow a military response to Saddam Hussein and his government in Iraq.

Conservatives have grown increasingly skeptical of American military engagements overseas, a sentiment Mr. Trump has encouraged. But the president is also influenced by Iran hawks in his administration, including Secretary of State Mike Pompeo, who believe that Tehran responds to the use of force. Last month, Mr. Trump threatened to “shoot down” Iranian patrol boats that have harassed American warships in the Persian Gulf.

In his veto statement on Wednesday, the president seemed to reaffirm his past claims that General Suleimani was plotting imminent action.

“We live in a hostile world of evolving threats, and the Constitution recognizes that the president must be able to anticipate our adversaries’ next moves and take swift and decisive action in response,” Mr. Trump said. “That’s what I did!”