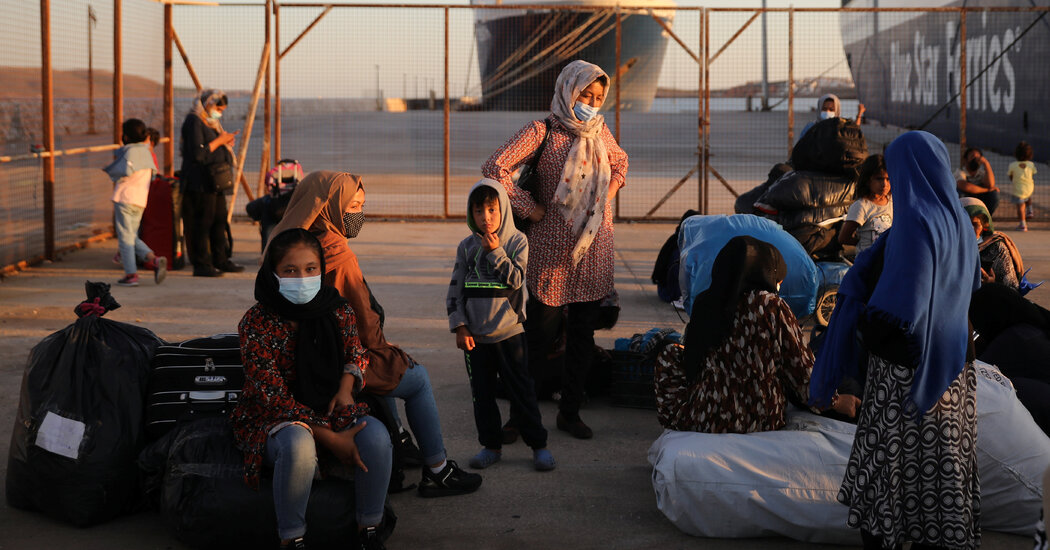 WASHINGTON — The Trump administration said it would cut its already rock-bottom refugee admissions still deeper into record territory for the upcoming year, as President Trump returned to his anti-immigrant themes in the closing month of his re-election campaign.

The change in the number of refugees that Mr. Trump plans to admit is not drastic: no more than 15,000 in the fiscal year that began Thursday, down from 18,000 in the 2020 fiscal year, which was a record low. The number was set in a notice sent to Congress late Wednesday, shortly before the statutory deadline to set the new limit.

Both numbers are slivers of the 110,000 slots that President Barack Obama approved in 2016. The big cut in 2020 virtually sealed off a pathway for the persecuted into the country and obliterated the once-robust American reputation as a sanctuary for the oppressed.

But the cut signaled that Mr. Trump is willing to take his exclusionary immigration policies still further, and it was delivered to Congress as the president was unleashing a xenophobic tirade against one of the nation’s most prominent refugees, Representative Ilhan Omar, on Wednesday night at a rally in her home state, Minnesota.

In the notification sent to Congress on Wednesday, Mr. Trump also proposed not admitting refugees from Somalia, Syria and Yemen, the origins of many in recent years, with exceptions for “those who have been persecuted or have a well-founded fear of persecution on account of religion.” The administration cited security concerns within the region, even though refugees are not approved to come to the United States until they clear extensive security screenings.

By law, the president must tell Congress at the end of September the maximum number of refugees that will be allowed entry into the United States for the following year. Mr. Trump and the architect of his immigration policies, Stephen Miller, have used that power as part of their overall assault on the nation’s legal immigration system.

But the president and his political advisers also believe that the largely successful effort to seal off the country from asylum seekers and refugees fleeing persecution, war and violence is a winning campaign issue, helping to bolster the president’s standing among his core supporters just before the election on Nov. 3.

His campaign also warns voters that refugees will take their jobs and cost the government money, a charge that has been refuted in many studies.

In Ms. Omar, Mr. Trump seems to believe he has found the prime target of that strategy.

“She tells us how to run our country, can you believe it?” he thundered at his rally in Duluth, Minn. “How the hell did Minnesota elect her? What the hell is wrong with you people — right? What the hell happened?”

And he has tried to link her liberal politics to his opponent, Mr. Biden, who has said he would reset the refugee cap at 125,000 if elected.

“Another massive issue for Minnesota is the election of Joe Biden’s plan to inundate your state with a historic flood of refugees,” the president said.

“Seven hundred percent increase, refugees, coming from the most dangerous places in the world, including Yemen, Syria and your favorite country, Somalia, right?” Mr. Trump said later, to a chorus of boos in a state that has one of the largest Somali populations in the country. Minneapolis is home to about 57,000 people of Somali descent.

The 15,000 cap is the latest step in one of the central aims for Mr. Trump during his first term: to close the United States to immigrants. The broad effort has included restricting travel from African and Muslim-majority countries and sealing the land borders of the United States to migrants fleeing persecution, even as the United Nations reported this year that nearly 80 million people have been displaced by oppression and war.

The cap, which administration officials at one point considered setting to zero, may actually overstate how many refugees will be allowed to resettle in the United States. Though this year’s cap was 18,000, the administration welcomed fewer than 11,000 refugees as of Sept. 25, leaving thousands stranded in camps around the world.

In a statement, the State Department, along with the Departments of Homeland Security and Health and Human Services, justified the cuts by pointing to an estimated 290,000 asylum claims it anticipated receiving this year.

But the paths to claiming asylum and refugee status are entirely separate. Potential refugees apply for the program overseas, and applicants face extensive security screenings before they are approved to come to the United States. Those seeking asylum ask for it when they step on American soil, and their claims must then wind their way through a backlogged immigration court system.

The United States has effectively brought asylum to a halt during the coronavirus pandemic. The Trump administration has used a public health emergency rule to immediately return most migrants crossing the border for asylum back to Mexico or their home countries, eliminating the opportunity to seek the protection.

The refugee program was also temporarily suspended because of the coronavirus. Immigration advocates say the administration’s system of harsh vetting and its ever-lowering cap have stranded some of the most desperate people in the world.

The administration’s approach “leaves tens of thousands of the most vulnerable refugees in danger and in many cases separated from their families,” said Nazanin Ash, the vice president of public policy at the International Rescue Committee. Such refugees, she added, “have followed all the rules and cleared all the security checks ⁠ — sometimes waiting as long as two years for a lifeline to the U.S.”

Mr. Trump’s assault on the refugee system has been multifaceted. Last year, the president issued an executive order allowing state and local governments to veto the resettlement of refugees, which critics said would stoke division and energize Mr. Trump’s supporters. That order is currently blocked by a lawsuit making its way through the court system. Most states also elected to accept refugees.

Mr. Trump also ended the system of reserving slots for Africa, East Asia, Southeast Asia, Central Asia, Europe, Latin America and the Caribbean, and instead carved out slots for 4,000 Iraqis who worked with the United States military, 1,500 for people from Central America and 5,000 for people persecuted for their religion. The additional 7,500 slots were reserved for others seeking family reunification who had been cleared for resettlement.

But even with the numbers set so low, the administration did not fill the slots, according to State Department data. Of the 4,000 openings for Iraqis who helped the military, only 123 were welcomed to the United States.

“They continue to cut what would normally be seen as legal ways to immigrate,” said David Lapan, a former spokesman for the Department of Homeland Security in the Trump administration. “They say they want people to get in line and follow the system, except they’re doing everything they can to change that system.”

Traveling in Italy this week, Secretary of State Mike Pompeo tried to defend the administration’s record on humanitarian assistance. When the Italian foreign minister, Luigi Di Maio, was asked on Tuesday if the United States was doing enough to help millions of refugees around the world, Mr. Pompeo stepped in to answer: “There’s no more generous nation anywhere in the world when it comes to alleviating human crises around the world.”

That did not assure Mahamud Ahmed, 19, who applied to bring his mother to the United States from a refugee camp in Ethiopia this year. Mr. Ahmed said he fled Eritrea when he was 11 to avoid being forced to join the military.

After years in a refugee camp in the region, he was accepted to the United States in 2017 and resettled in Rockford, Mich. During one of their recent monthly calls, his mother was elated to hear he had graduated high school. But he worries for her.

“I just want to bring her to live with me here,” Mr. Ahmed said. “They don’t even have enough food.”

As his hope that the United States will welcome her has dimmed, Mr. Ahmed has focused on visiting her once he makes enough money from his full-time time job inspecting the quality of vials used for future vaccines.