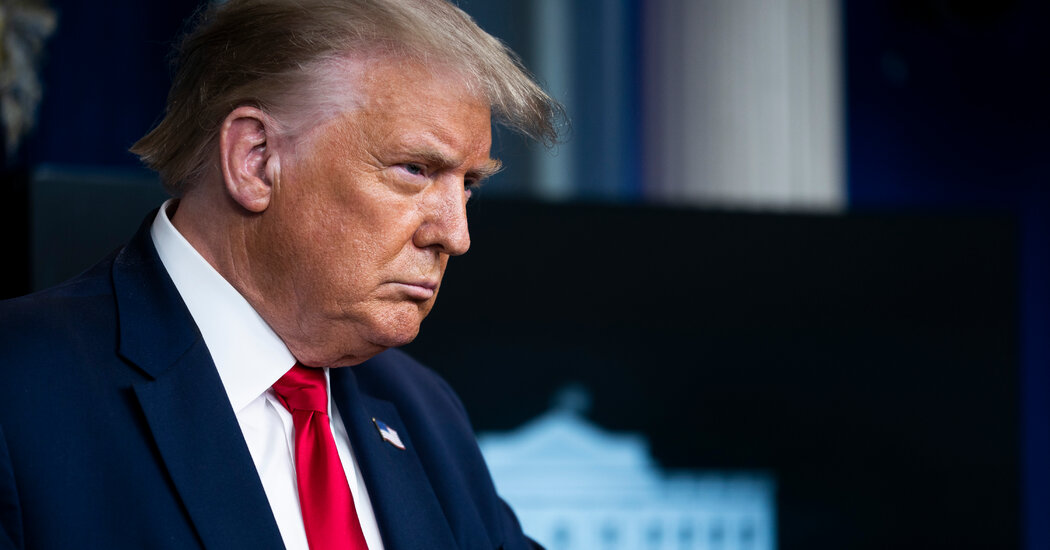 The New York prosecutors who are seeking President Trump’s tax records have also subpoenaed his longtime lender, a sign that their criminal investigation into Mr. Trump’s business practices is more wide-ranging than previously known.

The Manhattan district attorney’s office issued the subpoena last year to Deutsche Bank, which has been Mr. Trump’s primary lender since the late 1990s, seeking financial records that he and his company provided to the bank, according to four people familiar with the inquiry.

The criminal investigation initially appeared to be focused on hush-money payments made in 2016 to two women who have said they had affairs with Mr. Trump.

But in a court filing this week, prosecutors with the district attorney’s office cited “public reports of possibly extensive and protracted criminal conduct at the Trump Organization” and suggested that they were also investigating possible crimes involving bank and insurance fraud.

Because of its longstanding and multifaceted relationship with Mr. Trump, Deutsche Bank has been a frequent target of regulators and lawmakers digging into the president’s opaque finances. But the subpoena from the office of the district attorney, Cyrus R. Vance Jr., appears to be the first instance of a criminal inquiry involving Mr. Trump and his dealings with the German bank, which lent him and his company more than $2 billion over the past two decades.

Deutsche Bank complied with the subpoena. Over a period of months last year, it provided Mr. Vance’s office with detailed records, including financial statements and other materials that Mr. Trump had provided to the bank as he sought loans, according to two of the people familiar with the inquiry.

The bank’s response to the subpoena reinforces the seriousness of the legal threat the district attorney’s investigation poses for Mr. Trump, his family and his company, which in recent years have faced — and for the most part fended off — an onslaught of regulatory, congressional and criminal inquiries.

But while the subpoena of Deutsche Bank indicates the breadth of Mr. Vance’s investigation, his inquiry is still at an early stage, a person briefed on the matter said.

The district attorney’s office has spent the past year trying to obtain Mr. Trump’s personal and corporate tax returns, and the Supreme Court last month upheld prosecutors’ rights to seek the documents. But legal wrangling continues, and Mr. Vance’s office has said that its investigation will be hamstrung unless prosecutors get the tax returns.

Mr. Trump and his company have denied wrongdoing and have sought to dismiss the inquiry by Mr. Vance, a Democrat, as a politically motivated fishing expedition. Mr. Trump’s representatives have accused his former lawyer and fixer, Michael D. Cohen, of lying when he told Congress that Mr. Trump exaggerated the value of his real estate assets as he sought loans and in dealings with his insurance company.

The subpoena to Deutsche Bank sought documents on various topics related to Mr. Trump and his company, including any materials that might point to possible fraud, according to two people briefed on the subpoena’s contents.

The bank’s cooperation with Mr. Vance’s office is significant because other investigations that have sought Mr. Trump’s financial records have been stymied by legal challenges from the president and his family.

Last month, the Supreme Court dealt a blow to congressional investigations into the president’s finances when it ordered lower courts to reconsider whether Deutsche Bank and Mazars USA, Mr. Trump’s accounting firm, had to comply with congressional subpoenas seeking his records. The ruling meant that the subpoenas would not be enforced until after the presidential election in November, if at all.

Whatever records the Manhattan prosecutors obtain are subject to grand jury secrecy rules and might never become public unless the district attorney’s office brings charges and introduces the documents as evidence at a trial.

Even if investigators uncover what they think is evidence of fraud, criminal charges could be hard to prove. Valuing real estate assets involves subjective estimates and other assumptions, making it difficult to prove that someone intended to commit fraud. The New York Times reported previously that some Deutsche Bank officials viewed Mr. Trump’s financial statements as based on wildly optimistic assumptions and, in some cases, reduced his estimates of his assets’ values by up to 70 percent.

Some of the insurance and bank issues that have drawn scrutiny from reporters are also too old to be the focus of a criminal case.

Tax returns can be crucial evidence for proving that a defendant misstated the value of assets, said Daniel R. Alonso, who was Mr. Vance’s top deputy from 2010 to 2014 and is now in private practice. “Tax returns are an obvious place to look because of the precision required by tax authorities,” he said.

The district attorney’s investigation has been proceeding in fits and starts since it began in the summer of 2018. Almost immediately, Mr. Vance paused the inquiry at the request of the United States attorney’s office in Manhattan, which had prosecuted Mr. Cohen and was investigating whether others at the Trump Organization had committed crimes in the course of arranging the hush-money payments.

In early 2019, Mr. Cohen testified on Capitol Hill that Mr. Trump had inflated the value of his assets in order at times to obtain financing from Deutsche Bank, including in 2014 when he bid unsuccessfully for the Buffalo Bills football team. Mr. Cohen also told federal prosecutors in Manhattan about insurance claims the Trump Organization had filed that he believed had been inflated.

Last summer, after federal prosecutors concluded their investigation of the hush-money payments without bringing additional charges, Mr. Vance’s office resumed its inquiry. In August 2019, the office served a subpoena on Mazars, seeking the president’s tax returns and other financial records going back to 2011.

Mr. Trump filed a lawsuit last September seeking to block Mazars from complying. The case is still being litigated nearly a year later, even after the Supreme Court’s ruling last month affirming Mr. Vance’s right to criminally investigate the president. The justices said that Mr. Trump could go back to the lower court, where he first sued, and raise other objections to the subpoena.

Shortly after Mr. Trump filed his suit last year, Mr. Vance’s office provided the judge who has been overseeing the case, Victor Marrero, a two-page summary of its secret grand jury investigation, which was not made available to the public or to Mr. Trump. Days later, at a hearing in federal court in Manhattan, Judge Marrero said the inquiry “clearly is very complex” and “involves a lot of parties, extends over many, many years.”

While Deutsche Bank has been cooperating with prosecutors, Mr. Vance’s office made it clear to Judge Marrero last month that its inquiry had been stalled without the tax returns.

“It’s been nearly a year since we served our subpoena,” Carey R. Dunne, a senior official under Mr. Vance, told the judge, “and this lawsuit’s been very successful since then in delaying our ability to gather the central evidence.”

That delay, Mr. Dunne added, made it “ever more likely that the grand jury will be prevented from evaluating the evidence before the statutes of limitation expire.”