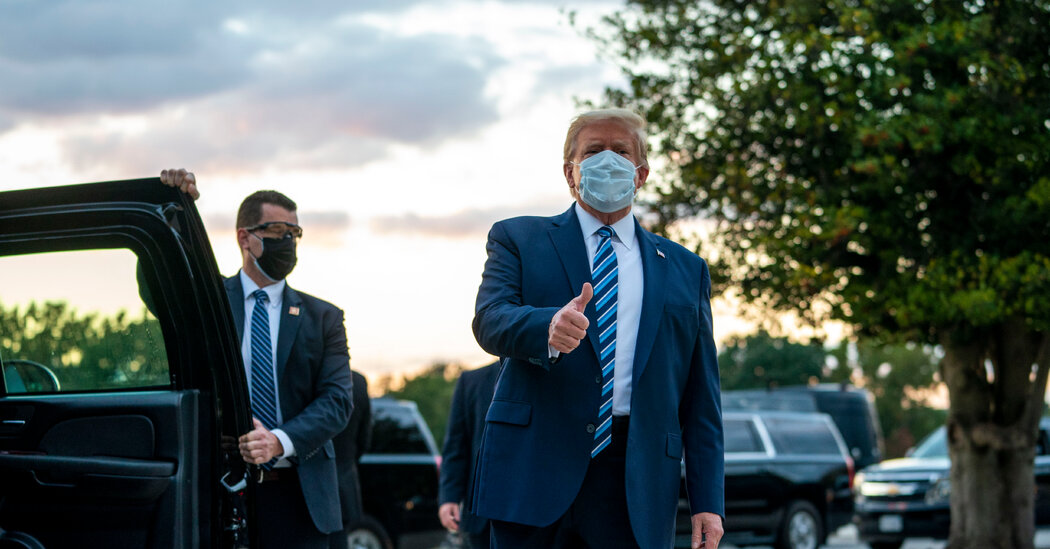 On Friday, even as President Trump had trouble getting enough oxygen and aides prepared to move him to the nation’s top military hospital, some of his campaign advisers saw a potential opportunity.

If Mr. Trump recovered quickly from his bout with the coronavirus and then appeared sympathetic to the public in how he talked about his own experience and that of millions of other Americans, he could have something of a political reset. The health crisis, one campaign official said, was a setback in a re-election campaign that polls have shown him losing for months, but also a chance to demonstrate a new stance toward the virus that might win over some voters.

And the president could use that to show from now until the second presidential debate, scheduled for Oct. 15, that the disease is serious but can be combated, and that he was ready to re-enter the campaign.

While that was the hope, it was severely undermined over the last few days by the president’s own behavior — no more so than Monday when he tweeted to the nation “Don’t be afraid of Covid. Don’t let it dominate your life!” without acknowledging that, as president, he gets far better care than the average citizen. His comments signaled a far likelier reality: that the erratic handling of his illness by Mr. Trump and his aides will remind voters of his administration’s failures and efforts to play down the deadly pandemic for six months.

“There’s a high-risk strategy here and I hope that the president doesn’t rush back into the campaign mode — which he wants to do before he gets well — until they tell him he’s no longer a danger to everybody else,” said Ed Rollins, an adviser to a super PAC supporting Mr. Trump.

Itching to get out of the hospital, Mr. Trump got his wish on Monday evening. Doctors allowed him to leave for the White House, while acknowledging he hadn’t yet reached the critical seven- to 10-day window that doctors watch for with the coronavirus to see whether patients take a turn for the worse.

Arriving back at the White House, he climbed two flights of stairs to the Truman Balcony, which isn’t his normal entry point, and almost immediately ripped off his mask for the cameras once there. He then filmed a campaign-style video from the balcony, saying that he was “better” and that “maybe I’m immune, I don’t know” to the ravages of the virus.

It is hardly the first time Mr. Trump has undermined the desires of his aides. He has contradicted them on issues ranging from China policy to preparation for the debate last week.

Over the weekend, Mr. Trump’s political advisers said they were cleareyed about who they were dealing with: Mr. Trump is widely seen as a figure incapable of empathy. But the hope was that discussing his own experience would help him manage the pandemic going forward, and could have political benefits.

Mr. Trump did little to adhere to the narrative aides were hoping would emerge, one that would benefit him politically. In videos filmed by aides of Mr. Trump behind the scenes, intended to show him working, the president did not mention the hardship the virus had caused to others or that anyone had suffered greatly from it. Nor did he mention the White House staff members who had fallen sick.

And his tweet, which also declared that “I feel better than I did 20 years ago,” framed the virus as something akin to a weekend at a spa. It signaled that Mr. Trump would most likely return to the campaign trail spouting more false rhetoric about the virus.

“It appears the campaign hasn’t discussed their concept with their candidate,” said Brendan Buck, a former adviser to the former House speaker Paul D. Ryan. “You would hope someone who has been in serious health crisis would have a bit of an awakening, find a little religion on this, but he seems incapable of doing that.”

Mr. Buck said the president’s approach was not necessarily helpful to him politically because it “didn’t pass the laugh test for a super serious situation that has ruined millions of people’s lives.” But he said it was still concerning because “half the country takes their cues from him.”

Another Republican strategist, Antonia Ferrier, a former adviser to the Senate majority leader, Mitch McConnell, said the president could take cues from other world leaders who had won a battle with the virus.

“After being released from the hospital, British Prime Minister Boris Johnson showed in personal terms how the virus impacted him — thanking those who helped him get back on his feet, committing to tackling the virus and balancing the challenges facing his country,” she said. “President Trump has an opportunity to communicate a similarly positive message.”

The campaign started to publicly preview that approach. “He has experience now fighting the coronavirus as an individual,” said Erin Perrine, a campaign spokeswoman. “Joe Biden doesn’t have that.”

It’s similar to a message Mr. Trump broadcast in 2016 — that he was able to combat corruption in the political system because he had once been part of that system as a donor.

Trump campaign officials continue to insist they are making no alternative preparations for the second debate and plan to be there. But Dr. Sean P. Conley, the White House physician, said it would not be clear until Oct. 12 whether Mr. Trump is over the hump of his virus.

Mr. Trump signaled his eagerness to resume campaigning in a Twitter post Monday evening. “Will be back on the Campaign Trail soon!!! The Fake News only shows the Fake Polls,’’ he wrote.

Internally at the Trump campaign, the view of the candidate’s chances are mixed. Advisers continue to hold out the belief that former Vice President Joseph R. Biden Jr., Mr. Trump’s challenger, could stumble, or that unforeseen events could intervene in the race. They frequently mention that the infamous “Access Hollywood” tape was made public on Oct. 7, 2016, a revelation that was supposed to sink Mr. Trump but did not.

Mr. Trump’s advisers are also trying to paint the virus as one in a long string of fights he has overcome, in line with the investigation into whether his campaign had ties with Russia or the impeachment inquiry.

When talking about their internal polling, some officials insist the surveys need to be shifted to account for “hidden” Trump voters who showed up in 2016.

But the campaign, which in September cut down on the number of traditional polls it had been previously been conducting, according to two people familiar with the decision, has been suffering a cash crunch that won’t be helped by Mr. Trump’s inability to appear at fund-raisers.

Campaign officials said the expectation was still to resume presidential rallies before November, contending that Mr. Trump’s only real exposure to people at those events was on the plane, and the entourage traveling with him would be smaller because so many of his own aides are out sick as well. The officials spoke on the condition of anonymity to disclose internal deliberations.

The president in many ways continues to behave as if he is a private citizen who happens to work in the White House. He has been incensed, for example, at reporting on whether he might have to transfer power to the vice president, the type of news coverage that has existed when other presidents have faced medical issues.

“And to the extent voters are open to reassessing their views, the president’s video dispatch from Walter Reed reflected the challenge of what his campaign seeks to do: The initial glimpse of humanity and humility quickly gives way to a rambling monologue that undermines the whole endeavor.”