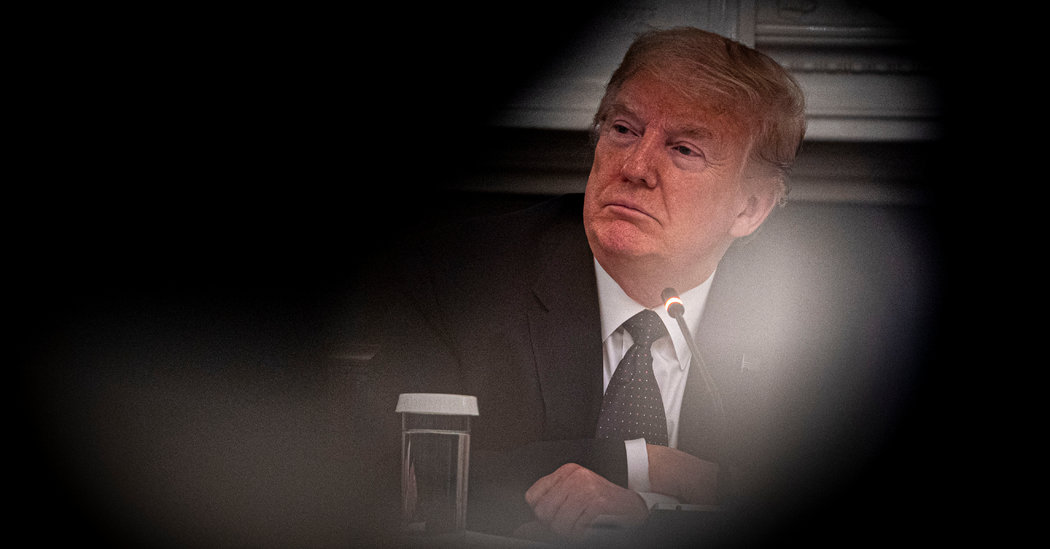 As President Trump has promoted hydroxychloroquine as a treatment for the coronavirus and claimed to be taking it himself, he has continued to make inaccurate or incomplete statements about the drug. Here is a fact check of his recent claims.

“Hydroxychloroquine is used by thousands and thousands of front-line workers, so that hopefully they don’t catch this horrible disease or whatever you want to call it.”
— in a cabinet meeting on Tuesday

This lacks evidence. It is certainly possible that some doctors and health care workers are still taking hydroxychloroquine as a preventive treatment, but there is little support for the president’s repeated suggestion that the practice is widespread.

The American Medical Association said in a statement that it “does not know of any tracking or surveys examining personal use of hydroxychloroquine among health care workers.”

In March, The New York Times and other news organizations reported that some doctors were prescribing themselves and their family members hydroxychloroquine and hoarding supplies, according to pharmacy boards across the country.

That behavior, however, appears to have declined after a warning from the Food and Drug Administration that the drug could cause serious heart problems for coronavirus patients, studies questioning its efficacy and a series of regulations from states and medical boards restricting its use.

“We have not received from the state boards of pharmacy any new concerns regarding the continued stockpiling of hydroxychloroquine,” said Al Carter, the executive director of the National Association of Boards of Pharmacy.

“Once states began implementing emergency limitations and guidelines on the amount of hydroxychloroquine that could be prescribed and dispensed for acute use, the complaints from pharmacists and state boards of pharmacy decreased significantly,” Mr. Carter added.

Mr. Trump may have been referring to front-line workers who are participating in clinical trials on the efficacy of hydroxychloroquine in preventing Covid-19 infection. Thousands are currently enrolled in these trials, and many are still recruiting eligible volunteers. Participants in these trials, however, represent a tiny fraction of the health care and front-line workers across the country. There are over one million active doctors and nearly three million registered nurses alone.

Researchers conducting these trials also said that interest in taking the drug, even in a clinical setting, had waned recently.

One of the largest trials coordinated by Duke University School of Medicine and the Patient-Centered Outcomes Research Institute, a nonprofit established by the Affordable Care Act that funds clinical research, has enrolled 550 health care workers, out of a goal of 15,000. Among a larger group of 12,000 front-line workers who have been sharing their experiences through the school’s website, two-thirds were previously interested in participating in the hydroxychloroquine trial, but that is down to about half “since the media hype,” said Dr. Adrian Hernandez, who directs the Clinical Research Institute at Duke.

Another doctor conducting a clinical trial who spoke on the condition of anonymity said many colleagues had stashes of hydroxychloroquine in their offices and used it as a preventive measure in the early days of the pandemic. Use is continuing but is no longer as widespread, the doctor said, especially after the F.D.A. warning and as supplies of personal protective equipment became less scarce. The doctor’s clinical trial, too, has lost recruitment because “people got scared,” the doctor said.

Dr. H. Michael Belmont, a professor of medicine at New York University, said his study had recruited 125 participants out of a capacity of 350, partly because of strict eligibility requirements, partly because cases in New York had decreased and partly because studies showing the drug’s ineffectiveness “reduced somewhat the enthusiasm.”

Taking hydroxychloroquine as a prophylactic should really be done only in a research setting, Dr. Belmont emphasized. “You do it outside a clinical trial, you lose the opportunity to answer scientific questions,” he said.

“And if you look at the one survey, the only bad survey, they were giving it to people that were in very bad shape. They were very old, almost dead. It was a ‘Trump enemy’ statement.”
— in remarks to reporters on Tuesday

False. Mr. Trump was referring to a study of 368 Veterans Affairs patients — all male with a median age over 65 — hospitalized with Covid-19 infections. It found no evidence that hydroxychloroquine reduced patients’ chances of being put on a mechanical ventilator and that the drug was associated with “increased overall mortality.”

But he was wrong that it was the “only bad survey” that threw cold water on the efficacy of hydroxychloroquine.

When Mr. Trump dismissed the study of veterans this month, The Times noted that the current body of research was limited to a few studies criticized for methodological errors and was insufficient to support the use of hydroxychloroquine and chloroquine, another malaria drug, as treatments.

Since then, more research has been published. Two studies, each observing around 1,400 patients in New York City, concluded that administering hydroxychloroquine was not associated with greatly lower risk of mortality. Smaller studies in France and China reached similar conclusions.

Reporter: “The F.D.A. has said hydroxychloroquine should not be used outside of a hospital setting or outside of a research study.”

False. The F.D.A.’s warning, issued in late April, specifically states that it “cautions against use of hydroxychloroquine or chloroquine for Covid-19 outside of the hospital setting or a clinical trial due to risk of heart rhythm problems.”

The agency did authorize the use of the drugs “for treatment of the virus in hospitalized patients when clinical trials are not available, or participation is not feasible.”

Mr. Trump seemed aware of the warning just an hour before he denied its existence.

“The F.D.A. warned that hydroxychloroquine could cause serious side effects, especially with the heart, with your heart,” a reporter told the president, after a luncheon with Republican senators.

Curious about the accuracy of a claim? Email [email protected].