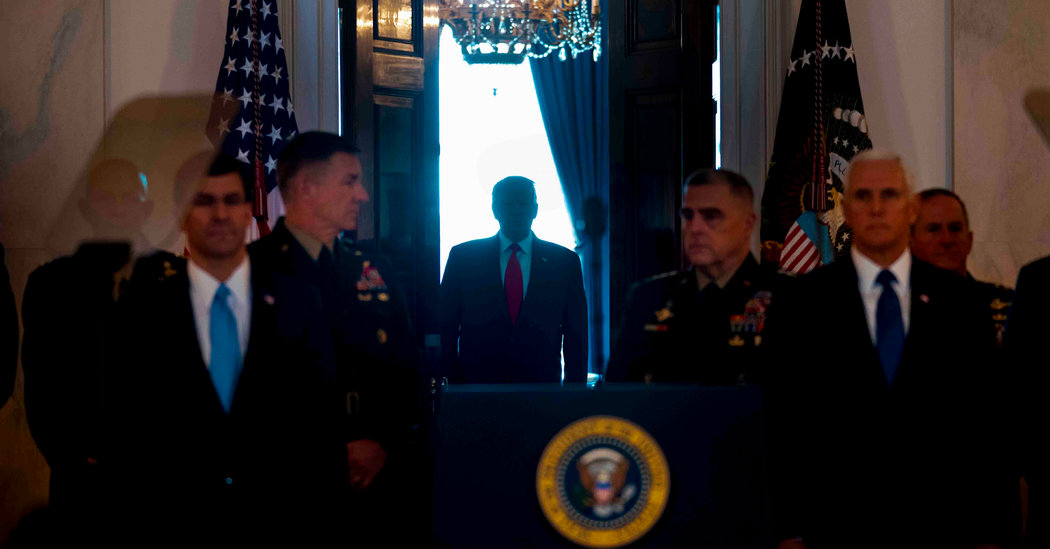 President Trump opened a small window for diplomacy with Iran on Wednesday, but combined his words with bald threats that made it hard to see how the two countries could break out of their cycle of confrontation and revenge.

The speech was, in many ways, the sound of muddled policy. It showed that after three years in office, Mr. Trump has yet to resolve the two conflicting instincts on national security that emerge from his speeches and his Twitter feed: bellicosity and disengagement.

And he included all the other requisite elements of a Trump policy speech on Iran: burning resentment of President Barack Obama, critiques of his predecessor’s nuclear deal, dubious factual claims and campaign-year self-congratulation.

Mr. Trump did pull back from the brink of war, at least for now. He made clear that he did not plan to respond to the missile attacks on two bases where American troops operate, which seemed calibrated by the Iranians to make a point without creating more human carnage.

But the president also promised to double down on sanctions against Iran, turning again to the economic tool he remained convinced would eventually force the country to choose between ruin and survival. Beyond saying the United States “is ready to embrace peace with all who seek it,” he presented no path forward for the two adversaries of 40 years.

“It certainly sent mixed messages to Iran,” said Karim Sadjadpour, an Iranian-American strategist at the Carnegie Endowment for International Peace.

Mr. Sadjadpour called the speech “initially triumphant” as Mr. Trump celebrated his order to kill the most famous military leader in Iran, a man responsible for the deaths of hundreds of American troops. “It was then dismissive toward Iran,” he said, “and then there was an almost throwaway line at the end about what a bright future the Iranians have if they only reshape themselves as the United States demands.”

The risk now is that the uneasy halt after Iran fired 16 missiles early Wednesday at American forces in Iraq will prove temporary. History is filled with examples where missed signals led countries down a path to conflict profoundly not in their interests, notably the cascade of events that led to World War I. Rarer are the examples where a quiet accommodation of each other’s national interests prevailed, as they did when President John F. Kennedy secretly traded Soviet missiles in Cuba for American missiles in Turkey in 1962.

Unlike the Soviets, Iran cannot reach American shores with its arsenal. But the mere fear in the West that Iran could seek revenge by pushing ahead with a nuclear weapon remains its greatest leverage. There was an uneasy sense in the Pentagon on Wednesday that while Iran may not shoot more missiles from its own territory, it will almost certainly return to its specialties of shadow wars and cyberattacks.

Mr. Sadjadpour called the speech “strategically incoherent.” But that can be said about much of Mr. Trump’s Middle East policy in the past few months. The president pulled a small, fairly safe American force out of Syria that was primarily engaged in fighting the Islamic State with Syrian Kurdish allies, claiming it was time to halt “endless wars.” He decided not to respond when Iran first shot down an unmanned American drone and then executed a precision attack on Saudi oil facilities, leaving the impression inside the Islamic Revolutionary Guards Corps that America’s Middle East ally was not worth defending.

And then, surprising everyone, including his own military advisers, he ordered the targeted killing of Maj. Gen. Qassim Suleimani, Iran’s most important commander, saying that he was planning attacks on American targets, although the administration has offered few details.

Already that decision has led to a host of unintended consequences, including the sending of thousands more United States troops to the Middle East to defend American assets and interests that Mr. Trump only a few months ago suggested are not worth defending.

His answer to that contradiction seems to be to ask NATO to do the job. Presumably he wants allied forces to patrol the Persian Gulf at a time that tanker companies are halting their shipments across the Strait of Hormuz and airlines are avoiding Iraqi and Iranian airspace.

It seems unlikely they will heed his call. NATO’s leading members argue that it was Mr. Trump who picked this fight with Iran, by dumping the 2015 nuclear deal reached during the Obama administration that, in their mind, was working. And, as Mr. Trump himself complains, they do not have the military capability to play the role the United States has played.

“His failure to consult the allies or take their interests into consideration will make it extremely difficult to get their support,” said R. Nicholas Burns, the former American ambassador to NATO during the early days of the Afghanistan war, when Europe did come to America’s aid. “Very few of the allies trust him and will not follow blindly the most anti-NATO president in seven decades.”

The Iranians are betting on exactly that. Their strategy has been to peel Europe, China and Russia — the other nations involved in negotiating the accord — away from the United States. For a long while, they succeeded as European powers kept devising complex plans to counteract American sanctions on Iran.

But the Europeans were eventually outmaneuvered by the United States Treasury Department and unable to convince European companies that doing business with Tehran was worth the risk of losing their access to the American banking system. As a result, Iran’s effort to make up its lost oil revenue all but collapsed.

The Iranians have now resumed producing nuclear material, effectively abandoning the restrictions they agreed to under Mr. Obama. Mr. Trump used his speech on Wednesday to urge the Europeans to recognize that the Obama-era nuclear accord was over, and to get back on board with the United States.

“The time has come for the United Kingdom, Germany, France, Russia and China to recognize this reality,” he said.

The reality Mr. Trump does not want to recognize is that since he dismantled the agreement, Iranian nuclear scientists are months closer to nuclear breakout than they were when they were abiding by the deal’s restrictions.

Mr. Trump now says the new strategy is the old strategy: On Wednesday, he promised “powerful” new sanctions that would “remain until Iran changes its behavior.” He never explained why the sanctions enacted so far — the most severe in modern history, he often says — have failed to prompt that change over the past 18 months.

Secretary of State Mike Pompeo, a hawk on Iran, had a label for the administration’s Iran policy: “confront and contain.” It is a phrase meant to invoke the Cold War, when the United States faced a much larger and more dangerous enemy in the Soviet Union.

But it is not clear that classic containment works in a world where terrorists and cyberweapons easily cross borders, where attacks are deniable and Western allies at odds with each other.

And containment begets resistance. That seemed clear on the Twitter feed of one of Iran’s leading nuclear negotiators, Saeed Jalili.

Mr. Trump had posted an American flag in the minutes after the killing of General Suleimani. Mr. Jalili waited until the missiles had hit the bases in Iraq with Americans. Then he posted an Iranian flag.