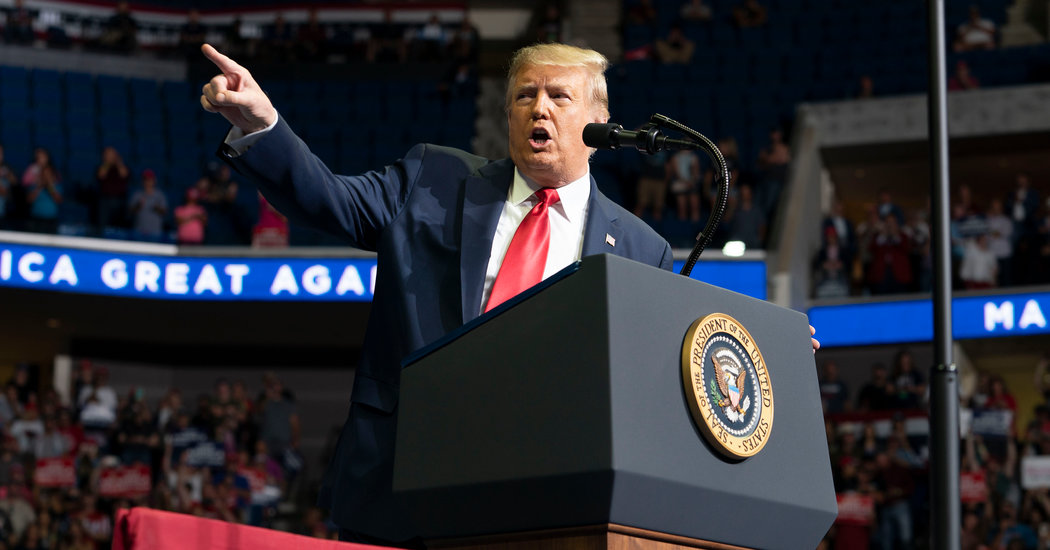 A lot of Republicans are acting puzzled about Donald Trump’s re-election pitch. “He has no message,” one Republican source told Reuters. “He needs to articulate why he wants a second term,” said another. Some have expressed hope that Trump would find a way to become less polarizing, as if polarization were not the raison d’être of his presidency.

It’s hard to know if Republicans like this are truly naïve or if they’re just pretending so they don’t have to admit what a foul enterprise they’re part of. Because Trump does indeed have a re-election message, a stark and obvious one. It is “white power.”

The president started this week by tweeting out a video that encapsulates the soul of his movement. In it, a man in The Villages, an affluent Florida retirement community, shouts, “White power!” at protesters from a golf cart bedecked with Trump signs. “Thank you to the great people of The Villages,” wrote Trump. Only after several hours and a panic among White House staffers did the president delete the tweet.

And why would he? Republicans might act as if they don’t know why Trump’s fans are so unfailingly loyal. Some commentators spent the first year or two of his presidency dancing around the reason he was elected, spending so much time probing the “economic anxiety” of his base that the phrase came to stand for a type of willful political blindness.

But Trump understands that he became a significant political figure by spreading the racist lie that Barack Obama was really born in Kenya. He launched his history-making presidential bid with a speech calling Mexican immigrants rapists and adopted a slogan, “America First,” previously associated with the raging anti-Semite Charles Lindbergh. Throughout the 2016 campaign, he won the invaluable prize of earned media with escalating racist provocations, which his supporters relished and which captivated cable news.

People voted for Trump for reasons besides racism. There was also sexism. Some voters were just partisan Republicans, or thought that reality TV is real and that Trump was as successful as “The Apprentice” made him seem. I once met a young man at a Trump rally who’d voted for Obama but was worried about the taxes he’d pay when he inherited his family’s car dealership.

Trump, however, seems to grasp that racism is what put him over the top. It’s what made his campaign seem wild and transgressive and hard to look away from.

Now Trump’s poll numbers are cratering, we have double-digit unemployment and our pandemic-ravaged nation has been rendered an international pariah. America is faring exactly as well under Trump’s leadership as his casinos, airline and scam university did. It’s not surprising that he’s returning to what he knows, and what seemed to work for him before.

In fact, Trump appears to think his problem is that he hasn’t been racist enough. On Wednesday, Axios’s Jonathan Swan reported that Trump regrets listening to his son-in-law Jared Kushner’s “woke” ideas — as a source put it — including on criminal justice reform. Instead, he wants to double down on law and order. “He truly believes there is a silent majority out there that’s going to come out in droves in November,” a source told Swan.

And so last week, as if to prod that silent majority, Trump tweeted out videos of Black people assaulting white people. (“Where are the protesters?” he asked.) He has made a point of calling the coronavirus the “kung flu.” At a time when even Mississippi is removing Confederate imagery from its state flag, Trump has thrown himself into the protection of what he calls “our heritage.”

He signed an executive order directing federal law enforcement to prosecute people who damage federal monuments — threatening them with up to 10 years in prison — and withholding funds from municipalities that don’t protect statues. (Whether this latter provision is enforceable is unclear.) He said he’d veto a $741 billion defense bill over a provision, written by Senator Elizabeth Warren of Massachusetts, requiring that military bases honoring Confederates be renamed. Apoplectic over New York City’s plans to paint the words “Black Lives Matter” on Fifth Avenue in front of Trump Tower, he called the slogan “a symbol of hate.”

On Tuesday, Trump tweeted that he was considering scrapping an Obama-era housing regulation that required localities to address illegal patterns of residential segregation. He claimed that the initiative, which his administration had already put in limbo, was having a “devastating impact on these once thriving Suburban areas.”

The message to his white supporters seemed clear enough: Trump is going to fight to stop people of color from coming to your neighborhood.

The Times reported on the president’s rationale: “Mr. Trump and his campaign team, already concerned about his weakness in battleground states, have become increasingly alarmed by internal polling showing a softening of support among suburban voters.” Trump sees clearly — more clearly than most of his party — that racism is the main thing he has to offer.

There’s good reason to think that he’s misjudging these suburban voters. Polls show that a growing number of them, particularly women, are repelled by Trump’s race-baiting and divisiveness. But Republicans who complain that the president is undisciplined, that he can’t adhere to a strategy, miss the point: Bigotry has always been the strategy.

The Republicans who support him are yoked to that strategy. Their real frustration isn’t that it’s ugly but that it’s no longer working.