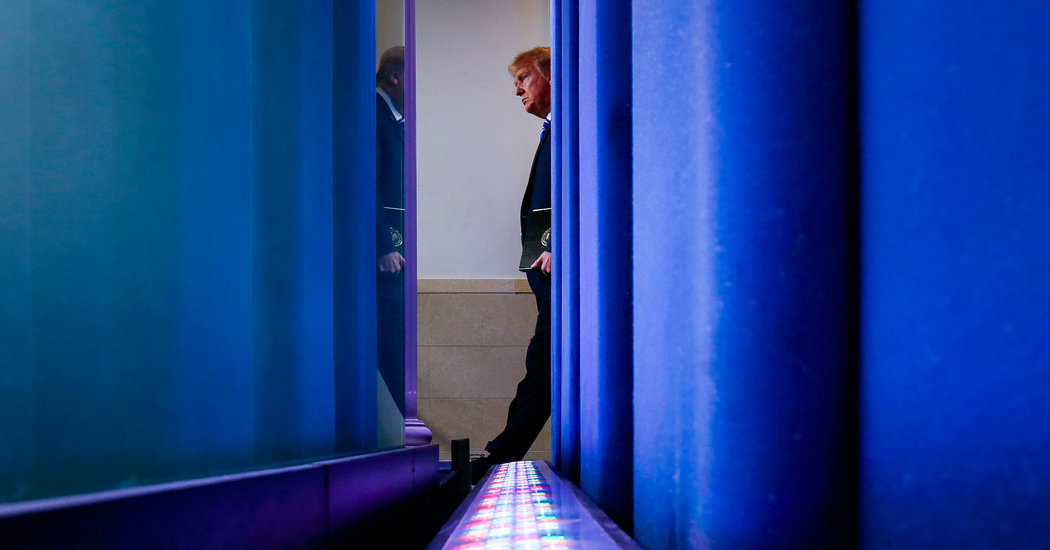 WASHINGTON — At a March visit with doctors and researchers at the Centers for Disease Control and Prevention, the public health agency at the heart of the fight against the coronavirus, President Trump spoke words of praise for the scientific acumen in the building — particularly his own.

“Every one of these doctors said, ‘How do you know so much about this?’ Maybe I have a natural ability,” Mr. Trump said.

It was a striking boast, even amid a grave health crisis in which Mr. Trump has repeatedly contradicted medical experts in favor of his own judgment. But a disregard for scientific advice has been a defining characteristic of Mr. Trump’s administration.

As the nation confronts one of its worst public health disasters in generations, a moment that demands a leader willing to marshal the full might of the American scientific establishment, the White House is occupied by a president whose administration, critics say, has diminished the conclusions of scientists in formulating policy, who personally harbors a suspicion of expert knowledge, and who often puts his political instincts ahead of the facts.

“Donald Trump is the most anti-science and anti-environment president we’ve ever had,” said Douglas Brinkley, a presidential historian at Rice University. The president’s actions, he said, have eroded one of the United States’s most enviable assets: the government’s deep scientific expertise, built over decades. “It’s extraordinarily crazy and reckless,” he said.

Judd Deere, a White House spokesman, said in a statement that Mr. Trump’s handling of the coronavirus outbreak “has put the full power of the federal government to work to slow the spread, save lives, and place this great country on a data-driven path to opening up again.”

Well before winning the presidency, Mr. Trump had publicly questioned science by expressing skepticism about vaccines and suggesting climate change was a hoax fabricated by China.

Once in office, Mr. Trump’s administration quickly began work on one of its most far-reaching policies — the systematic downplaying or ignoring of science in order to weaken environmental health and global warming regulations. Automakers, farmers and others had sought regulatory relief, saying that more flexible rules would still ensure progress on environmental protection while avoiding bureaucratic mandates. However, in implementing the rollbacks, the administration has marginalized key scientists, disbanded expert advisory boards and suppressed or altered findings that make clear the dangers of pollution and global warming.

More recently, as the coronavirus outbreak engulfed the nation, Mr. Trump has repeatedly clashed with his own public health experts.

He was slow to react to early internal warnings to take the outbreak more seriously and has promoted the use of various drugs to fight the virus even as scientists said there was no proof they would be effective. On Thursday, he suggested that injecting disinfectants might help defeat Covid-19, drawing global condemnation and ridicule.

And last week Mr. Trump publicly downplayed a warning by Dr. Anthony Fauci, the administration’s most visible medical expert, that the United States still lacked adequate capacity to test for the coronavirus. “I don’t agree with him on that, no,” Mr. Trump said. “I think we’re doing a great job on testing.”

The president also suggested that the virus might be gone by the fall, a line that was immediately countered by Dr. Fauci, who said: “We will have coronavirus in the fall. I am convinced of that.”

Historians and foreign policy experts said the administration’s disregard for scientific expertise — combined with the nation’s broader retreat from international trade agreements and cross-border defense alliances like NATO — is diminishing the nation’s status on the world stage. “America’s friends feel like they don’t even recognize us,” said Kori Schake, director of foreign and defense policy studies at the American Enterprise Institute, a conservative research organization.

Other critics noted that Mr. Trump’s decision to withdraw the United States from the Paris Agreement, a 2015 pact among nations to combat climate change, has left the world adrift on one of the biggest challenges to face humanity. And now, amid a sweeping global pandemic, Mr. Trump has said he will halt funding for the World Health Organization.

Part of what elevated America after World War II, Dr. Schake said, was that “we represented modernity in all its advantages,” whether by creating a polio vaccine or landing a man on the moon. “It will be a real struggle to restore the admiration for the United States that is such an important part of our power in the world,” she said.

The administration faces immense challenges in navigating the coronavirus outbreak. Shutdowns nationwide have already pushed 26 million people into unemployment. But health experts have converged on a broad agreement that sending people back to work too soon, before measures like a robust testing system are in place, risks causing a surge of new infections, deepening the crisis.

In many cases, the administration’s guidance broadly follows that scientific understanding. But experts have also warned that Mr. Trump’s frequent exhortations to quickly reopen the economy threaten to muddle a vital public health message at a precarious time.

“It’s precisely because we’re in this uncertain and perilous moment that it’s all the more important to rely on the best scientific advice,” said Lawrence Gostin, a professor of public health law at Georgetown University.

Past administrations have, to varying degrees, disregarded scientific findings that conflicted with political or policy priorities. For example, the Reagan administration was criticized by health experts for being slow to respond to the AIDS crisis in the 1980s. And in 2011, President Barack Obama’s top health official overruled Food and Drug Administration scientists who had found that over-the-counter emergency contraceptives were safe for minors.

But within the Trump administration, the attacks on science and expertise have been far more broad.

Critics of the administration’s actions both on environmental matters and the virus say that federal policy has been shaped to favor short-term economic gain at the expense of public health.

With much of the nation sheltering at home from the coronavirus — bringing commerce to a halt, sending unemployment skyrocketing and causing turmoil in the financial markets — the motivations to restart the economy are powerful. But Mr. Taylor of the Niskanen Center said that some conservatives were incorrectly diagnosing the stay-at-home orders as the main driver of the nation’s woes rather than the virus itself.

Mr. Taylor likened it to the argument that government action to fight climate change would be too costly in various ways — an argument that overlooks the significant costs of inaction. “If we leave the underlying problem unattended,” he said, “the economic cost will be far greater.”

Over the past month the Environmental Protection Agency has issued several deregulatory policies, including on mercury pollution and automobile emissions, overruling advice from the agency’s own independent advisory board that such findings lacked scientific rigor. The E.P.A. also refused to tighten air quality standards, despite preliminary research suggesting that long-term exposure to dirty air could exacerbate the risk of death from the coronavirus.

The administration has maintained that it can safeguard health and the environment while loosening restrictions on industry. Andrea Woods, a spokeswoman for the E.P.A., said, “We have never ignored the science in making the very tough policy decisions required of the agency.”

The parallels between the administration’s environmental rollbacks and its coronavirus response are not exact. When it comes to the coronavirus outbreak, there is still an important counterweight to many of Mr. Trump’s impulses, most notably Dr. Fauci. Asked last week if he felt that experts at the National Institutes of Health were unable to speak their minds or oppose Mr. Trump, Dr. Fauci was unequivocal. “Absolutely no,” he said.

That stands in contrast to the administration’s approach on issues like climate change, where officials who have spoken out have found themselves sidelined.

In July, Rod Schoonover, a State Department intelligence analyst, resigned in protest after the White House blocked his discussion of climate science in Congressional testimony. In other instances, the administration has promoted climate denialists’ work and allowed them to insert misrepresentations of scientific facts into federal documents.

Still, there have been some prominent staff shake-ups at health agencies.

Before the pandemic began, the C.D.C. had reduced its staff in Beijing from approximately 47 to 14 under the Trump administration, a move that critics have said may have complicated its ability to confront the outbreak earlier. An agency spokesman said it had been done to focus more on “technical collaboration” with China, which requires fewer people.

In February, Nancy Messonnier, a top C.D.C. official, was removed from overseeing the agency’s coronavirus response. Dr. Messonnier had warned that Americans need to prepare for a “significant disruption” at a time when Mr. Trump was insisting that the virus was “very well under control in our country.”

Climate Fwd: What on earth is going on? Get the latest news about climate change, plus tips on how you can help.

Last week, Rick Bright was dismissed as the director of the Biomedical Advanced Research and Development Authority, the agency involved in work on coronavirus treatments. Mr. Bright said he had been removed after urging caution in expanding access to hydroxychloroquine, the controversial treatment embraced by Mr. Trump. He also said the administration had put “politics and cronyism ahead of science.”

Mr. Trump has said he “never heard” of Dr. Bright. Mr. Deere, the White House spokesman, accused critics of waging a campaign “to criticize this president for discussing anything that might provide hope to the American people.”