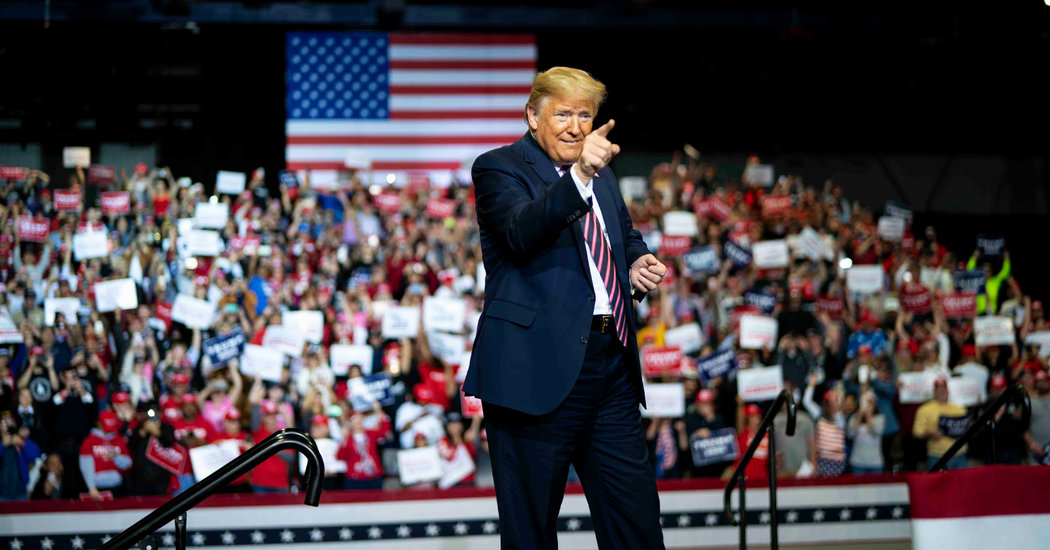 Once again, President Trump is taking heat for treating the presidency like a branding exercise.

This time, instead of brandishing a Bible he doesn’t read next to a church he doesn’t attend, the president is resuming huge, made-for-TV campaign rallies. The first is set for Saturday in Tulsa, Okla. It will take place in a 19,000-seat arena that, in deference to the coronavirus pandemic that’s still raging, had canceled all other events through the end of July.

For Trump’s triumphal return, his campaign has decided that no social distancing is required. He wants this to be a spectacle, packed with as much noisy adoration as possible.

But whatever risks those attending might incur, Team Trump is taking steps to ensure that it bears none. All rally attendees must sign a liability waiver holding the campaign legally blameless in the event that people subsequently fall sick. Or drop dead.

Over the weekend, Tulsa’s top health official, noting that coronavirus cases are spiking in the state, implored the campaign to postpone the party. But what is the health of his followers to Mr. Trump compared with a mass show of affection — especially after he has endured so many sad weeks without such affirmation?

It is important to stress that there is nothing wrong with presidential photo ops per se. Politics is a performative business, especially the presidency. With skillful staging, presidents can signal their priorities, inspire the nation or simply model good behavior. Think about Ronald Reagan at the Berlin Wall; George W. Bush throwing out the first pitch in Game 3 of the World Series in Yankee Stadium not long after the Sept. 11 attacks; Barack Obama sitting alone on the Rosa Parks bus.

As tacky as it may sound, using people as props is also a presidential staple. What are the guests at the State of the Union address but a way to convey priorities? And bill signings not infrequently feature regular Americans affected by the legislation.

Now and then, the messaging goes sideways. Jimmy Carter donning a cardigan for a fireside chat about the energy crisis depressed Americans more than it roused them to conserve. And George W. Bush most likely had second thoughts about the “Mission Accomplished” fiasco of 2003.

But, on the whole, presidential theater is a powerful tool of the trade, one that Mr. Trump should understand better than most. He is, after all, a former reality TV star, long obsessed with image and ratings.

Three-plus years into office, however, he rarely (if ever) aims for anything more than making himself look important. Whether posing in a tractor-trailer, using Air Force One as campaign prop or ordering up a martial pageant for July 4, complete with tanks and fighter jets, no higher purpose is on display.

While such performances carried a whiff of Il Duce, most did not put the public at direct risk. The same cannot be said of Mr. Trump’s public relations stunts of late.

The Lafayette Square episode of June 1 was chilling. The White House’s damage-control efforts aside, the basics are clear: Attorney General Bill Barr directed federal law enforcement agencies to clear peaceful protesters from the area directly across the street from the White House. Smoke bombs, pepper balls and rubber bullets were among the weapons used. This was done as the president and his entourage — including the chairman of the Joint Chiefs of Staff, Gen. Mark Milley, in combat fatigues — were preparing to walk across the park so Mr. Trump could wield a Bible in front of the parish house of a historic church for a photo op so impious it would make Beelzebub blush.

Current and former members of the military expressed their dismay. General Milley later apologized for letting himself be used. “I should not have been there,” he said in a video statement.

None of them should have been there.

Mr. Trump’s disregard for public health and safety isn’t limited to people he considers hostile. On Saturday, he delivered the commencement address in person at West Point to a crowd of cheering cadets. Footage from the event will, no doubt, make for vivid campaign ads.

To give the president his moment — complete with a 21-gun salute — some 1,100 young men and women, all of whom had been sent home in March because of the pandemic, were summoned back to campus to quarantine together for two weeks before the ceremony. More than a dozen initially tested positive for the coronavirus. The graduates’ friends and family were not allowed to attend the ceremony, which drew protesters carrying signs with messages such as “Cadets Aren’t Props.”

Now Mr. Trump is thinking even bigger — and demanding greater risk from his most faithful followers. From a public health standpoint, resuming large, crowded, indoor rallies is madness. But the president is not content simply to endanger the lives of his supporters. He is demanding they sign away their rights for the privilege.