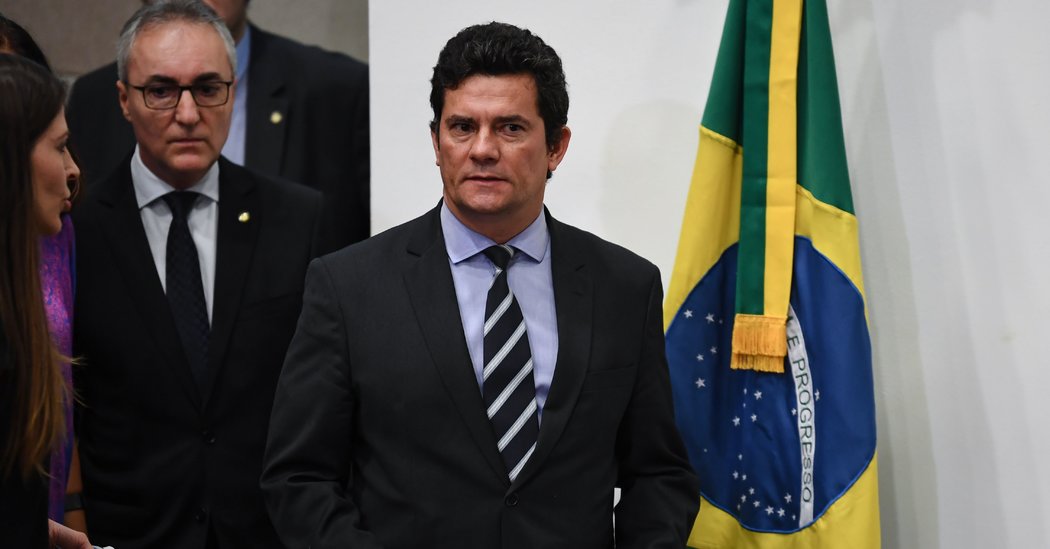 The resignation of Mr. Moro, one of Brazil’s most popular politicians, set off a political uproar in Brazil, as critics across the political spectrum accused the president of having undermined a key pillar of democracy.

In his resignation speech, Mr. Moro delivered an extraordinary parting rebuke, recounting in great detail a conversation during which he failed to persuade the president not to follow through on his plan to fire the federal police chief, Maurício Valeixo, who was forced to step down Friday morning.

Mr. Moro’s acrimonious departure was a volatile and unexpected development in Brazil, where the rapid spread of the coronavirus has overwhelmed hospitals and roiled the political establishment. Mr. Bolsonaro, who has downplayed the gravity of the virus, last week fired his health minister after the two clashed over strict quarantine measures to slow the contagion.

Mr. Moro was the eighth minister to leave Mr. Bolsonaro’s cabinet during the 15 months he has been in office.

“Moro’s resignation is a seismic event in Brazilian politics,” said Ilona Szabó, the executive director of Igarapé Institute, which studies public safety in Brazil. “His departure signals a dangerous new phase for Brazil.”

Ms. Szabó called the president’s move a “coup against democracy because the autonomy of the federal police is an essential foundation for democratic governance.”

In his resignation speech, Mr. Moro said Mr. Bolsonaro had confided that he wanted a police chief he could call directly and count on to obtain sensitive investigative information and intelligence dossiers.

The request came as several allies of the president — including two of his sons — are under criminal investigation by the federal police and the Supreme Court.

Speaking Friday at the Justice Ministry, Mr. Moro provided a politically damaging account of his final substantive conversation with the president, which took place on Thursday.

“The president said more than once, expressly, that he wanted a person he could be in touch with personally, whom he could call directly, from whom he could receive information, intelligence reports,” Mr. Moro said, describing the kind of relationship Mr. Bolsonaro wanted with a new police chief.

Although Mr. Moro said he had urged Mr. Bolsonaro to reconsider the implications of his plan, the president was determined, Mr. Moro added, to have a federal police chief who would do his bidding.

Mr. Moro said that the president was “worried about pending cases before the Supreme Court,” and that the change at the federal police “would also be helpful in that sense.”

After Mr. Moro spoke, the attorney general, Mr. Aras, issued a statement that the conduct described, if true, suggested Mr. Bolsonaro had broken numerous laws, including ones against corruption and obstruction of justice. If Mr. Moro’s account were to turn out false, Mr. Aras added, the minister would have committed the crime of making a “slanderous accusation.”

In Brazil, the attorney general is appointed by the president, and the office is independent of the Justice Ministry.

Mr. Bolsonaro fired back at Mr. Moro in a lengthy, angry televised address on Friday afternoon.

“I never asked to have any member of my family shielded,” Mr. Bolsonaro said, referring to Mr. Moro’s clear implication that the firing of the police chief was done in part to help protect his sons

The president also asserted that he was empowered to hire and fire department heads at will.

“I don’t need to ask for permission from anyone to replace a director or anyone else,” Mr. Bolsonaro said in the rambling address, in which he also spoke of the heating system of the presidential palace’s pool, corporate credit cards and plastic surgery, without explaining how they were relevant to Mr. Moro’s ouster.

Brazil’s federal law-enforcement agencies were given a tremendous degree of independence when the country’s 21-year period of military rule ended in the late 1980s.

Mr. Moro called the president’s dismissal of Mr. Valeixo a clear breach of a condition he set when he accepted the ministry. Mr. Moro said the president had promised him “carte blanche” in making critical law-enforcement appointments and safeguarding the political independence of institutions under his command.

“I cannot stay on without being able to preserve the autonomy of the federal police,” Mr. Moro said. Failing to resign, he added, “would signal agreement with interference in the federal police that stands to have unpredictable consequences.”

In joining his cabinet, Mr. Moro took a widely criticized gamble by leaving a 22-year judgeship to enter the political arena, which called into question the integrity of his work on the bench.

Mr. Moro, 47, was the most visible leader of a sprawling corruption investigation known as Car Wash that began in Brazil in 2014 and rippled across the region, leading to the imprisonment of presidents and powerful business moguls.

The most high-profile defendant Mr. Moro convicted as part of that operation was former President Luiz Inácio Lula da Silva, who was found guilty of money laundering and corruption in July 2017. That outcome thwarted Mr. da Silva’s bid to seek a third presidential term at a time when he was the front-runner.

Mr. Moro’s conduct in that prosecution came under scrutiny after the Intercept Brasil, an online news site, published articles last year based on leaked private messages from the hacked phones of federal prosecutors. Those messages made clear Mr. Moro broke ethical and legal rules by providing strategic guidance to prosecutors.

Mr. Bolsonaro has come under withering criticism for minimizing the seriousness of the coronavirus, which is spreading at an accelerated rate and overwhelming hospitals in several Brazilian states.

The president has called the virus a “measly cold” that doesn’t warrant quarantine measures detrimental to the labor market and economic growth.

That view has sparked daily protests and a movement in Congress to impeach him.

The Social Liberal Party, or P.S.L., a right-wing party Mr. Bolsonaro joined to run for president, issued a statement calling the events that led to Mr. Moro’s departure deeply disturbing and likely criminal. Mr. Bolsonaro left the party in November after fighting with former allies.

The P.S.L. called the “unjustified dismissal” of the police chief a “clear form of political interference by President Jair Bolsonaro in the fight against organized crime that not only breaks with his campaign promises, but amounts to a series of crimes of responsibility, including obstruction of justice.”

Joice Hasselmann, a lawmaker from São Paulo who led the push on Mr. Bolsonaro’s agenda in Congress until October, accused the president on Friday of seeking to shield his sons from criminal investigations.

“The president is trying to meddle with the leadership of the federal police to prevent it from doing the work they need to do,” she said. “So that they don’t get to his sons.”

Mr. Bolsonaro’s son Flávio Bolsonaro, a senator, is under investigation for allegedly skimming off the salaries of some public employees in his former office as a state lawmaker in Rio de Janeiro. Flávio Bolsonaro has denied wrongdoing.

According to news reports, another son, Carlos Bolsonaro, a state lawmaker, is among the targets of an investigation by the Supreme Court into defamatory misinformation campaigns conducted online.

During his resignation speech, Mr. Moro recounted his legacy as a judge and presented himself as a law-abiding public servant who would find other ways to serve Brazilians in the future.

“What he was trying to do was maintain some of the political capital he has gained,” said Malu Gatto, an assistant professor of Latin American politics at University College London. “And distance himself from a president that seems to be increasingly toxic.”