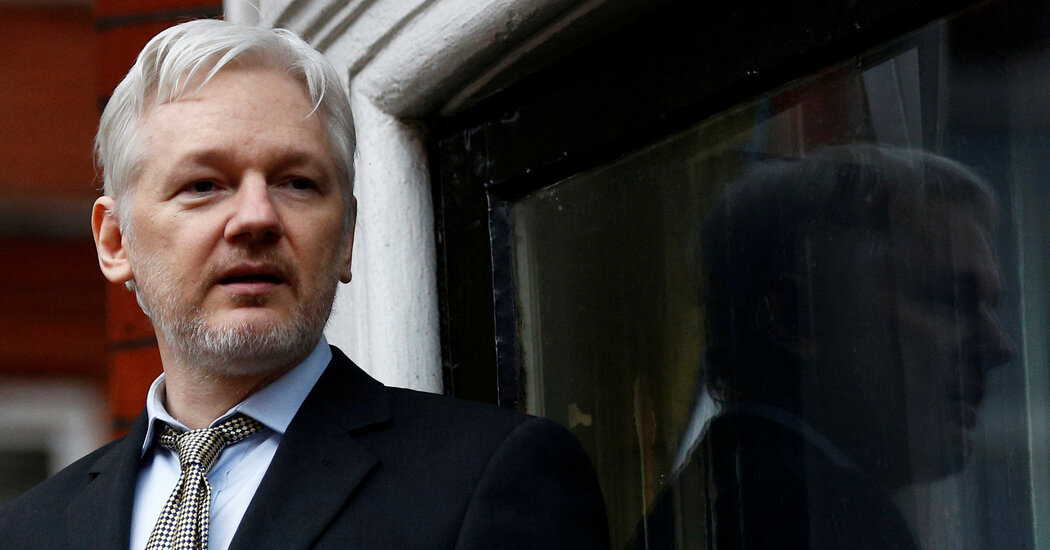 The WikiLeaks founder will seek to appeal. But if the extradition goes ahead, he would face espionage charges that could put him in prison for decades.

LONDON — A British court ruled on Friday that Julian Assange can be extradited to the United States to face charges that could result in decades of jail time, reversing a lower-court decision in the long-running case against the embattled WikiLeaks founder.

The ruling was a victory, at least for now, for the Biden administration, which has pursued an effort to prosecute Mr. Assange begun under the Trump administration. Mr. Assange will seek to appeal the decision to Britain’s Supreme Court, according to his legal team.

The Justice Department’s decision to charge Mr. Assange under the Espionage Act in connection with obtaining and publishing secret government documents has raised novel First Amendment issues and alarmed advocates of media freedom. But because he has been fighting extradition, those questions have not been litigated and his transfer to the United States could set off a momentous constitutional battle.

The extradition case in Britain has not turned on whether the charges against Mr. Assange are legitimate — a lower-court judge ruled they were — but on whether prison conditions in the United States are too harsh for his mental health.

In ruling that Mr. Assange can be extradited, the High Court in London said that it was satisfied by the Biden administration’s assurances that it would not hold him at the highest security facility in the United States — which houses the nation’s worst criminals — and that, if he were convicted, it would let him serve his sentence in his native Australia if he requested it. The United States also said Mr. Assange would receive any necessary psychological treatment.

In January, the lower court judge had rejected the extradition request on the grounds that Mr. Assange might be driven to suicide by American prison conditions.

Several doctors have said Mr. Assange suffers from depression and memory loss and could attempt suicide if he were extradited.

Wyn Hornbuckle, a spokesman for the Justice Department, said the government was “pleased by the ruling” and would have no further comment. But an American lawyer for Mr. Assange, Barry J. Pollack, called it “disturbing” that the British court had accepted the American government’s “vague assurances” of humane treatment.

“The U.K. court reached this decision without considering whether extradition is appropriate when the United States is pursuing charges against him that could result in decades in prison, based on his having reported truthful information about newsworthy issues such as the wars in Iraq and Afghanistan,” he said.

Mr. Assange fled to the Ecuadorean Embassy in London in 2012 when he was facing an investigation on accusations of sexual assault in Sweden, which was eventually dropped. He said he feared his human rights would be violated if he were extradited in that case.

He remained in the embassy for seven years until he was ejected in 2019. The United States unsealed an indictment against him on hacking charges on the day of his expulsion, and charged him under the Espionage Act weeks later. He has been detained in London’s Belmarsh prison since 2019.

The case against Mr. Assange centers on his 2010 publication of diplomatic and military files leaked by Chelsea Manning, a former Army intelligence analyst — not on his publication during the 2016 election of Democratic emails stolen by Russia.

Over the course of three indictments developed during the Trump administration, prosecutors have made two sets of accusations.

The first is that Mr. Assange participated in a criminal hacking conspiracy, both by offering to help Ms. Manning mask her tracks on a secure computer network and by engaging in a broader effort to encourage hackers to obtain secret material and send it to WikiLeaks. The other is that his solicitation and publication of information the government deemed secret violated the Espionage Act.

Hacking is not a journalistic act. But the second set of charges could establish a precedent that journalistic-style activities like seeking and publishing information the government considers classified may be treated as a crime in the United States — a separate question from whether Mr. Assange himself is considered a journalist.

Mr. Assange’s fiancé, Stella Moris, in a statement called Friday’s decision a “grave miscarriage of justice.” Ms. Moris and Mr. Assange have two children, conceived while he was in the Ecuadorean embassy in London.

The Case Against Julian Assange

Who is Julian Assange? Mr. Assange is the founder of WikiLeaks. He rose to international prominence with the release of leaked diplomatic and military files in 2010 provided by Chelsea Manning, a former Army intelligence analyst. In 2016, during the U.S. election, WikiLeaks published Democratic National Committee emails stolen by Russia.

How did Assange’s legal troubles begin? In 2012, Mr. Assange fled to the Ecuadorian Embassy in London as he fought extradition to Sweden over a rape inquiry. The charges were later dropped, and he remained in the embassy for seven years, until he was ejected in 2019.

What are the criminal charges brought on by the U.S.? After his expulsion from the embassy, the U.S. unsealed an indictment against Mr. Assange and sought his extradition. Prosecutors have accused him of violating the Espionage Act for his role in the 2010 disclosures and of participating in a hacking conspiracy. (He is not charged for the publication of the D.N.C. emails in 2016.)

Why does his case raise media freedom issues? The solicitation and publication of government secrets is a journalistic-style activity, whether or not Mr. Assange counts as a journalist. That raises novel First Amendment issues and could establish a precedent constraining investigative journalism about military, intelligence and diplomatic matters.

Where is Mr. Assange now? After he was expelled from the embassy, he was sentenced to 50 weeks in jail in London for for breaching bail conditions related to the rape inquiry; he has remained in prison while the U.S. extradition case is pending.

Can the U.S. extradite him? In January, a court rejected the U.S. extradition request on the grounds that Mr. Assange might be driven to suicide by American prison conditions. The Trump administration appealed, and the Biden administration later made assurances of humane treatment. On Dec. 10, a higher court ruled that Mr. Assange can be extradited. His lawyer said they will seek to appeal.

Kristinn Hrafnsson, the editor in chief of WikiLeaks, warned that Mr. Assange’s life “is once more under grave threat, and so is the right of journalists to publish material that governments and corporations find inconvenient.”

He added, “This is about the right of a free press to publish without being threatened by a bullying superpower.”

Activists who gathered outside the courthouse in central London erupted in protest after the news of the decision filtered outside. And rights groups quickly condemned it.

Christophe Deloire, the head of Reporters Without Borders, said in a statement that “we defend this case because of its dangerous implications for the future of journalism and press freedom around the world.”

Jameel Jaffer, the executive director at the Knight First Amendment Institute at Columbia University, who testified in the extradition proceeding, reiterated “profound concerns” about the case in a statement.

The indictment, he said, focused in large part on activities that investigative journalists engage in routinely.

“The message of the indictment is that these activities are not just unprotected by the First Amendment but criminal under the Espionage Act,” he said. “The Trump administration should never have filed this indictment, and we call on the Biden administration again to withdraw it.”