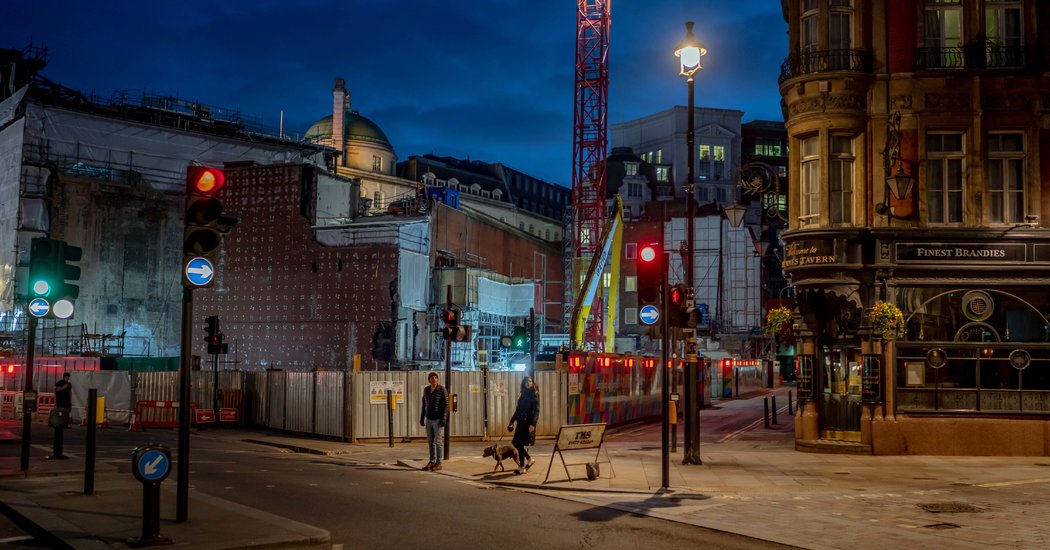 LONDON — With governments distracted by the battle with the coronavirus, many analysts have assumed that Britain and the European Union will be forced to extend their year-end deadline for reaching a post-Brexit trade deal.

But, despite painfully slow progress in talks, the British government is adamant about sticking to that forbidding timetable, even at the risk of heaping more economic damage on nations reeling from the impact of lockdowns.

With Prime Minister Boris Johnson still convalescing after being hospitalized with Covid-19, his officials in London on Friday rejected any idea of stretching out the talks, echoing earlier comments from Britain’s top negotiator, David Frost, who noted that the deadline was Dec. 31 and added bluntly: “We will not ask to extend it. If the E.U. asks we will say no.”

As we prepare for the next Rounds of negotiations, I want to reiterate the Government’s position on the transition period created following our withdrawal from the EU.

Transition ends on 31 December this year.

Not long ago such talk seemed more like posturing than practical politics, and many assumed the two sides would quietly agree in June to extend the talks. Yet, if anything, Britain seems to be hardening its position, raising fears that a second economic shock — over Brexit — could hit struggling European economies.

The thinking seems to be that the economic costs of abruptly withdrawing from the European Union without a trade deal might be buried by the British government beneath the damage wreaked by the coronavirus.

“There are significant practical implications of not delaying; the question is whether the government cares about that, and at the moment they are showing every sign of not caring,” said Anand Menon, professor of European politics and foreign affairs at King’s College London. He noted that Mr. Johnson had so far spurned a rock-solid reason for pushing back the timetable.

“If it were the practicalities and the economics, rather than the politics, you would say there is nothing to lose by delaying,” he said. “If ever there was a force majeure argument for a delay, coronavirus is it. But I don’t think the practicalities are dominating yet.”

Others see this as part of a hardball negotiating strategy and believe Britain will ultimately buckle, though perhaps not until the very last moment.

Though it formally left the European Union in January, Britain remains under the bloc’s rules until the end of the year, by which time a new trade agreement is supposed to have been reached. Even before the coronavirus struck, that was an ambitious time scale. Failure could leave ports clogged and disrupt supply chains at a time when many businesses already face acute pressure.

On Friday the European Union’s chief negotiator, Michel Barnier, said progress in four areas of discussion had been “disappointing,” while a British statement said “limited progress was made in bridging the gaps between us and the E.U.”

Not only must the two sides negotiate agreements on everything from aviation to fisheries, Britain must also introduce new customs posts at the border and a new immigration system.

David Henig, director of the UK Trade Policy Project at the European Center for International Political Economy, a research institute, believes Britain will not request an extension but has not given up on striking a basic deal.

“I think they are underestimating the challenge, but they think a deal can be done,” said Mr. Henig, referring to the team around Mr. Frost. “One or two others in government think that’s overly optimistic but also think that’s fine, too, without a deal.”

Given the political unpalatability of the current transition period, the government has no incentive to discuss extending it, said Mujtaba Rahman, a former European Commission economist now at Eurasia Group.

“The party and Boris Johnson view the transition as purgatory,” he said, adding that Britain will swear it has no plans to ask for an extension until the last possible moment, in late May or early June. And when it does, he said, it will seek a short-term extension that would allow it to strike a trade deal as soon as possible in 2021.

The British argument for powering ahead with talks is that businesses want certainty about the new trading arrangements and that delay pushes that further into the future. Nor is it clear that more time would resolve the philosophical differences between the two sides, such as a standoff on whether Britain should sign up to some European rules to ensure fair competition.

Some believe that the economic shock of the coronavirus may embolden the British government, thinking that London’s muscle as a financial center gives it a stronger hand in negotiations.

“The City of London is going to be very important as a way for governments to raise money,” said Tony Travers, a professor of politics at the London School of Economics. “They may think the E.U. will be more concerned about upsetting things, given the scale of coronavirus, and may give them a better deal.”

Mr. Johnson also wants to avoid paying into Europe’s coffers for another year to stay part of its single market in goods and its customs territory. Perhaps worse is the political signal it might send, upsetting some Brexit hard-liners and reminding voters of the Brexit paralysis that ultimately destroyed Mr. Johnson’s predecessor as prime minister, Theresa May.

But Mr. Johnson’s refusal to budge from his Brexit mind-set also reflects a political calculation that he owes his landslide majority in Parliament to his pledge to “Get Brexit Done.”

That pro-Brexit ideology played into the government’s failure initially to join a European Union initiative to pool forces to buy ventilators and protective equipment for health workers. The government claimed it did not join the group because an email went astray, though British officials attended meetings at which the initiative was discussed.

The situation got even murkier this week when the top civil servant in the Foreign Office testified before a parliamentary committee that the government had, in fact, made a political decision not to take part in the ventilator initiative. Hours later, when the government was sharply questioned about its account of a missed email, the official, Simon McDonald, recanted his assertion.

His retraction was greeted with derision, with some commentators likening it to the profuse apology delivered by John Cleese in the 1988 comedy “A Fish Called Wanda” while his character is dangled from a window.

The dispute was, however, a rare example of the government’s paying a political price for its ideological position on Brexit, and a reminder that refusing to extend the transition period could prove unpopular if there is a downside.

Around twice as many British voters favor extending the deadline than oppose it, according to three recent opinion polls that suggest that Mr. Johnson and his allies might be running both a political and an economic risk.

“At the moment they think that they can carry on being ideological on Brexit and can continue to carry the country with them,” said Mr. Henig, who cautioned that failing to secure an agreement would lead to a “rocky road.”

“There are a series of risks if the government does not go for a deal or an extension,” he said. “Some of them will turn bad.”