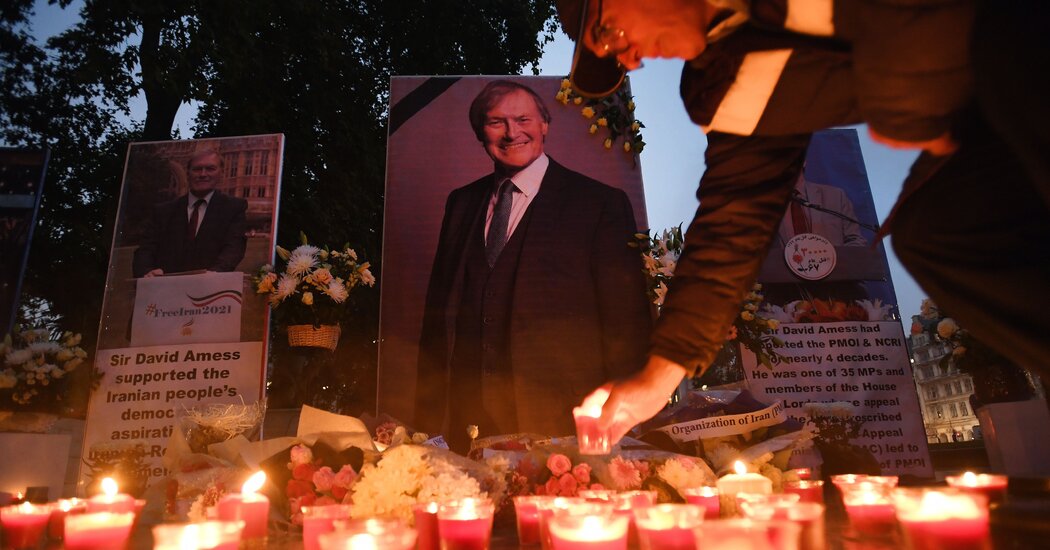 LONDON — Politicians from across the political divide on Monday united in tribute to David Amess, the British lawmaker killed in an assault last week that has heightened concerns about security arrangements for members of Parliament.

The police have declared the attack a terrorist incident and have until Friday to charge the man being held for the assault on Mr. Amess. Three houses in and around London have been searched by antiterror detectives but no clear motive has yet been disclosed for the assault.

The authorities have not named the suspect, but British press reports identified him as Ali Harbi Ali, 25, a British national of Somali heritage and son of Harbi Ali Kullane, an adviser to a former prime minister of Somalia who currently resides in London.

Addressing Parliament on Monday, Prime Minister Boris Johnson told lawmakers that Mr. Amess “was taken from us in a contemptible act of violence, striking at the core of what it is to be a member of this House.” He said Parliament had lost a “patriot who believed passionately in this country, in its people, in its future,” and one of its “nicest, kindest, and most gentle individuals.”

The somber atmosphere gave way to cheering when Mr. Johnson announced that the town where Mr. Amess was elected, Southend-on-Sea, would be granted the elevated status of a city, fulfilling a goal for which the lawmaker had long campaigned.

The opposition leader Keir Starmer described Mr. Amess as a committed public servant whose kindness and decency touched everybody he met, adding that Parliament was “united in our grief at this terrible time.”

An opponent of abortion, a staunch monarchist and an enthusiastic supporter of Brexit, Mr. Amess was on the right of the Conservative Party, but the tributes crossed ideological lines as politicians with a wide range of viewpoints rose to speak. The words were heartfelt, and sometimes humorous, even from political opponents.

Some of the speakers also touched on the increasing security risks underscored by the attack on Mr. Amess, who was fatally stabbed while preparing to meet with local voters in his constituency in Leigh-on-Sea, around 40 miles from London. “Members of this house are being murdered for simply doing their job. That is the terrible reality we are faced with,” said Ian Blackford, leader of the Scottish National Party’s lawmakers in the British Parliament.

In media interviews Monday, the deputy prime minister, Dominic Raab, said that he had received three death threats in the past two years, and in Wales police arrested a man over a threat he allegedly made — in the days since the attack on Mr. Amess — to Chris Bryant, a Labour Party lawmaker.

On Monday Kim Leadbeater, a Labour lawmaker and the sister of Ms. Cox, offered her support to Mr. Amess’s family. She recalled feeling “physical pain” when she heard that her sister had died, adding that there followed a “rollercoaster of deep trauma that nobody should have to experience.”

Britain has gone through a period of acute polarization following the Brexit referendum in 2016, but many lawmakers blame the increasingly toxic atmosphere surrounding politics on social media.

“We are systematically vilified day after day,” one Conservative lawmaker, Mark Francois, told Parliament. Mr. Francois called on his fellow lawmakers to legislate to prevent those who peddle online abuse from hiding behind anonymity.

There have also been calls for better physical protection for lawmakers. The home secretary, Priti Patel, has ordered a review of safety with police contacting all 650 lawmakers to review their security procedures. Among the measures being discussed are the use of more airport-style scanners and even equipping lawmakers with stab-proof vests. That has sharpened the dilemma between security and openness for British politicians, many of whom pride themselves on the directness of their contact with local voters. In Britain lawmakers routinely hold meetings with their constituents, such as the one at which Mr. Amess was killed, to allow them to air problems or grievances.

On Monday Mr. Raab rejected the idea of plainclothes police protecting lawmakers at these events, adding that he would probably favor deploying more security apparatus that could be operated by private guards.