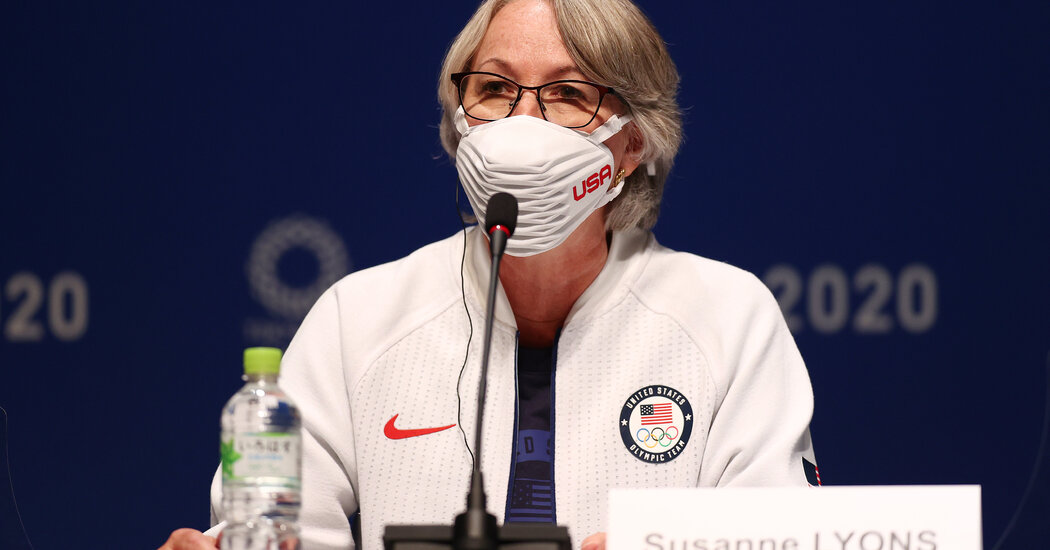 Olympic leaders were critical of China’s handling of the Peng Shuai case but tried not to say anything that would jeopardize the safety of the American athletes headed to Beijing.

With seven weeks to go before the start of the Winter Olympics in Beijing, leaders of the United States Olympic and Paralympic Committee criticized China’s handling of the recent allegations of sexual assault from one of its star athletes.

China’s treatment of the three-time Olympian Peng Shuai, one of China’s top tennis players, has become a contentious issue since Nov. 2, when Peng accused a former top government official of sexually assaulting her. Little has been heard from her since.

“I think this is a sad situation,” Susanne Lyons, chair of the organization, said Friday during a conference call with the news media after its final board meeting of the year. “One of the most important lessons that we at the U.S.O.P.C. have learned through the past several years is not only to listen to survivors of abuse but also to believe them and protect them from retaliation. So this hits close to home.”

Peng, 35, disappeared from public view more than a month ago after she accused Zhang Gaoli, a former vice premier of China, of sexual assault. Her disappearance, China’s efforts to censor any mention of her allegations and its sometimes clumsy efforts to suggest she had retracted her claims have only intensified concerns about her safety among tennis officials, fellow athletes and human rights groups.

In addition, lawmakers in the United States and abroad have described China’s treatment of its ethnic Muslim minorities as genocide and denounced crackdowns on pro-democracy protests in Hong Kong.

Peng has not appeared publicly or spoken with outsiders without the presence of a Chinese official since she went public with her allegations. She has participated in two video calls with the International Olympic Committee, at least one of them with Thomas Bach, the president of the committee. However, the organization did not release transcripts or videos of those calls and there was no discussion of the allegations.

Lyons called on Friday for Peng’s allegations to be fully investigated by the appropriate authorities, just as Steve Simon, the leader of the WTA, the women’s professional tennis tour, has done. Simon has repeatedly tried to get in touch with Peng but has been unable to communicate directly with her. This month, the WTA suspended its operations in China, specifically the nine tournaments it holds in the country, including the WTA Finals, a rare move by a sports organization to give up lucrative contracts in the world’s largest country.

American athletes have expressed concern about their safety and their ability to speak and move freely at the upcoming Olympics, which are closed to international spectators because of the coronavirus. Most have done so privately, fearing retribution from Chinese officials. U.S. officials have warned athletes that they could be subject to punishment from Chinese authorities if they violate the country’s policies that limit political speech.

“The laws of China are distinct and different,” Lyons said. “The expectation is we abide by the rules of that country.”

The prospect of the Winter Games in Beijing has intensified the long-running debate about the intersection of politics and sports, with many leaders of international sports arguing that the two should remain separate but at the same time suggesting sports can help bridge divisions between countries.

Understand the Disappearance of Peng Shuai

Where is Peng Shuai? The Chinese tennis star disappeared from public view for weeks after she accused a top Chinese leader of sexual assault. Recent videos that appear to show Ms. Peng have done little to resolve concerns for her safety.

Who is Peng Shuai? Ms. Peng, 35, is a three-time Olympian whose career began more than two decades ago. In 2014, she rose to become ranked No. 1 in doubles in the world, the first Chinese player, male or female, to attain the top rank in either singles or doubles tennis.

Why did she disappear? On Nov. 2, Ms. Peng posted a long note on the Chinese social platform Weibo that accused Zhang Gaoli, 75, a former vice premier, of sexual assault. Within minutes, censors scrubbed her account and a digital blackout on her accusations has been in place ever since.

How has the world responded? The censors might have succeeded had Steve Simon, the head of the Women’s Tennis Association, not spoken out on Nov. 14. Ms. Peng’s accusations have drawn the attention of fellow athletes, the White House and the United Nations.

What has China said? Very little officially. Instead, state-run news organizations have been the quasi-official voices to weigh in. Notably, they are doing so on Twitter, which is blocked within China. Their messages appear to be aimed at communicating with the wider world.

Their critics insist that ignoring politics can allow authoritarian leaders to normalize their behavior and burnish their reputations both at home and internationally when they host major sports events, as Adolf Hitler did when Germany hosted the Summer Olympics in 1936.

During a conference call with journalists Friday, Sebastian Coe of Britain, a two-time Olympic gold medalist and the leader of World Athletics, the world governing body for track and field, said sports had long served as a potent form of diplomacy. He defended his organization’s decision to hold events in China in the coming years, calling the country an important supporter of track and field. He said any country’s approach to human rights was just one of many factors World Athletics considers when it selects the locations of its championships.

“It is in the mind but it is not the only thing we would look at,” Coe said.

The Biden administration announced this month that the United States would not send a diplomatic delegation to the Games, a customary sign of respect for the host nation. The governments of Canada, Britain and Australia followed suit. The boycott allows American athletes to compete, but it is seen as an affront and one of President Biden’s most public condemnations of Beijing. China said it would respond with “resolute countermeasures.”

Coe on Friday called diplomatic boycotts “meritless gestures.” Olympic officials in the United States have supported the move since it does not require athletes to miss an event many have spent their lives preparing for.

Those officials, led by Lyons, are trying to thread a needle in criticizing China to align themselves with public sentiment domestically while not angering the International Olympic Committee. The board of the United States Olympic and Paralympic Committee voted this week to move ahead with a campaign to bring the Winter Games back to Salt Lake City as soon as 2030, less than two years after Los Angeles hosts the Summer Games in 2028.