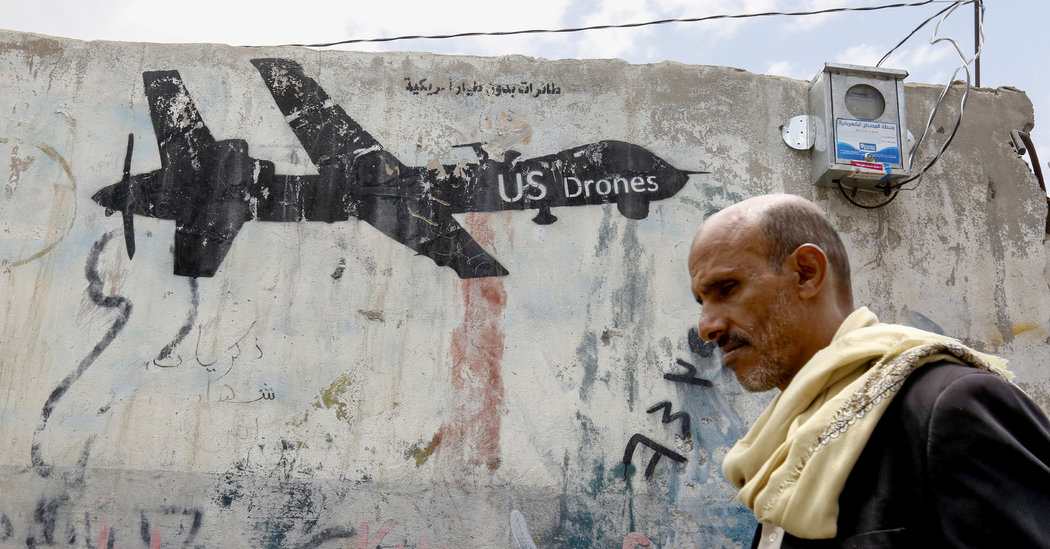 The disclosure of a second mission indicated that the Trump administration had plans for a broader campaign than was previously known, intended to cripple Iran’s ability to carry out proxy wars in other countries. After Iran’s retaliatory missile strikes on Iraqi bases that host American troops, both Washington and Tehran appear to have stepped back from escalating the conflict further, at least for now.

The unsuccessful airstrike in Yemen was aimed at Abdul Reza Shahlai, an official with Iran’s Quds Force, a potent military organization that General Suleimani had led. Mr. Shahlai was known as a main organizer of financing for Shiite militias in the region.

Mr. Shahlai and General Suleimani were two of several Iranian officials the administration targeted in an effort to halt Iran-backed attacks on sites with Americans and to deter Iran from ramping up aggression in the region, American officials said.

The United States had offered a $15 million reward for information about Mr. Shahlai. The announcement of the reward accused him of involvement in attacks on American allies, including a failed 2011 plot to kill the Saudi ambassador to the United States.

Mr. Shahlai was based in Yemen, where Iran is supporting the Houthi rebels, who are fighting a coalition led by Saudi Arabia and that gets logistical help, intelligence and weapons from the American military and American arms makers. The attempted strike on Mr. Shahlai was first reported by The Washington Post.

On Friday, Mr. Trump expanded his description of the threat from Iran that he said prompted the strike on General Suleimani, saying Iran had planned to attack multiple embassies across the Middle East, including the American Embassy in Baghdad.

“I can reveal that I believe it probably would’ve been four embassies,” Mr. Trump told Laura Ingraham of Fox News. He provide no additional information.

But the new detail brought immediate criticism from Democrats, who have complained that the Trump administration has not shared specific, credible intelligence warning of an imminent attack.

“If there was evidence of imminent attacks on four embassies, the Administration would have said so at our Wednesday briefing,” Senator Christopher S. Murphy of Connecticut, who serves on the Foreign Relations Committee, wrote on Twitter. “They didn’t. So either Fox News gets higher level briefings than Congress…or…wait for it…there was no such imminent threat.”

Speaking on Friday at the White House, Mr. Pompeo defended the credibility of the intelligence, saying that “we had specific information on an imminent threat.”

“And those threats included attacks on U.S. embassies,” he added. “Period, full stop.”

Even so, Mr. Pompeo stopped short of repeating Mr. Trump’s comments about a specific plot against the American Embassy in Baghdad. But he also dismissed criticism from members of Congress that the administration had failed to share intelligence that backs up its case.

Asked how he defined an imminent threat, Mr. Pompeo replied: “This was going to happen. And American lives were at risk.”

A senior administration official said Friday that the intelligence showed that Mr. Suleimani was planning to have forces carry out some sort of attack in the region that would result in mass casualties of Americans, with the intent of getting the American military to withdraw from Iraq, one of his main missions. But the official provided no further details.

Some Pentagon and State Department officials have said since the killing of General Suleimani that there was nothing in intelligence that showed threats that were out of the ordinary. They said the United States was aware that General Suleimani was always capable of lethal attacks on Americans and at any given time would have various plans underway.

Administration officials say General Suleimani and the Quds Force, which is an arm of the Islamic Revolutionary Guards Corps, are responsible for the deaths of hundreds of Americans, most of them soldiers who were fighting in Iraq in the mid-2000s. At the time, the Quds Force passed technology and training to Iraqi Shiite militias that allowed the militias to make powerful explosives that could penetrate armored vehicles used by the American military. They were the deadliest types of roadside bombs encountered by Americans in the war.

Last April, the Trump administration designated as a terrorist organization the Revolutionary Guards, a wing of the Iranian military. It was the first time the United States had used that label against a part of another government.

On Friday, Mr. Pompeo and the Treasury secretary, Steven Mnuchin, announced new sanctions on Iranian officials and on a few companies — including two in China — involved in the production and export of Iranian steel and other metals. The Trump administration had already imposed major sanctions on Iran’s metals industry after Mr. Trump’s withdrawal in 2018 from a landmark nuclear agreement with the country, so analysts said the new sanctions would have little additional effect.

The damage to Iran from the new sanctions will be negligible, said Peter Harrell, a sanctions expert at the Center for a New American Security in Washington. “When it comes to putting materially more economic pressure on Iran, the Trump administration is something of a victim of its own success — and I think we are reaching the end of the road for what ‘maximum pressure’ can achieve when it comes to Iran’s economy,” Mr. Harrell said.

The successful drone strike against General Suleimani on Jan. 3 at Baghdad International Airport, which Iraqi officials say killed five Iranians and five Iraqis in a two-car convoy, and the unsuccessful attack in Yemen appeared aimed at knocking the Islamic Revolutionary Guards Corps back on its heels. Some senior military and intelligence officials had argued internally that significant strikes against the group would effectively damage Iran’s ability to direct its proxy forces.

But others in the Trump administration, including intelligence officials, had contended that strikes against senior commanders were risky and might have the effect of inciting a wider conflict with Iran that Mr. Trump has said he wants to avoid.

The Pentagon declined to confirm the strike attempt in Yemen. But Cmdr. Rebecca Rebarich, a Pentagon spokeswoman, noted that Yemen was “long understood as a safe space for terrorists and other adversaries to the United States.”

Members of Congress from both parties have tried to force Mr. Trump to end American involvement in the war in Yemen, which has resulted in the world’s worst man-made humanitarian crisis. Last April, the president vetoed a resolution from Congress that would have forced the military to halt all aid to the Saudi-led coalition.

Tensions between the United States and Iran have been on the rise since Mr. Trump withdrew from the nuclear deal and reimposed sanctions.

One such attack on Dec. 27 resulted in the death of an American interpreter, Nawres Hamid. That then prompted the Americans to carry out airstrikes on Dec. 29 on five sites in Iraq and Syria that killed at least 25 members of the Kataib Hezbollah militia and injured 50 others, American officials said.

Two days later, members of the militia carried out a protest at the American Embassy in Baghdad, which ignited outrage in Mr. Trump and Mr. Pompeo.