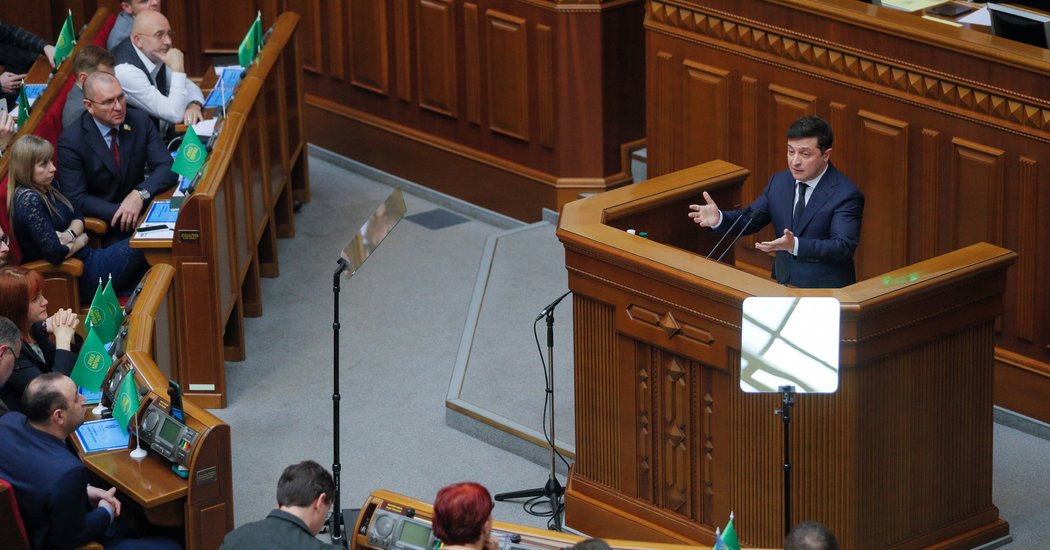 MOSCOW — Ukraine’s president, Volodymyr Zelensky, fired his cabinet of ministers on Wednesday after suggesting in a speech that they had become overly solicitous of Western nations that financially support Ukraine by appointing foreigners to the boards of state companies.

“With all respect to our international partners and with all appreciation for their help, the citizens of our country on governing boards of our companies are feeling like an ethnic minority,” Mr. Zelensky said in the speech in Parliament, where a vote was needed to dismiss the cabinet.

Mr. Zelensky also faulted the ministers for poor performance but offered praise and thanks that none had become entangled in a corruption scandal in the six months they served.

The shake-up was the most sweeping since Mr. Zelensky, a former comedian, won a presidential election last spring on promises to end a six-year war with Russian-backed separatists, and to root out corruption.

Over the summer, President Trump strained American ties with Ukraine by withholding around $400 million in military aid while requesting that Mr. Zelensky announce an investigation of unsubstantiated corruption accusations against former Vice President Joseph R. Biden Jr. and his son Hunter Biden. Mr. Trump also wanted the Ukrainian government to look into unfounded claims that Ukraine meddled in the 2016 election to help Hillary Clinton.

Those requests led to Mr. Trump’s impeachment by the House.

In a more routine form of tying foreign aid to actions by the Ukrainian government, donors including the United States government and the International Monetary Fund have for years endorsed independent appointees to state company boards to tamp down on corruption.

But pushback from Ukrainian politicians against requirements imposed by the I.M.F. has stepped up. A former business partner of Mr. Zelensky’s, Ihor Kolomoisky, a banking and media tycoon, has protested the nationalization of his bank, something the I.M.F. supported.

Mr. Zelensky asked Parliament to vote on the cabinet’s dismissal in a special session Wednesday evening. Of the 450 members of Parliament, 335 voted in favor.

The prime minister, Oleksiy Honcharuk, who had reportedly clashed with Mr. Kolomoisky over management appointments at a state-owned electrical company, was replaced by a former deputy prime minister, Denys Shmyhal, an economist and former governor of the western province of Ivano-Frankivsk.

Mr. Shmyhal had previously worked as an executive in the coal and electrical power company of a prominent Ukrainian oligarch, Rinat Akhmetov.

The cabinet shake-up reflects a movement in Ukrainian politics of what Volodymyr Yermolenko, editor in chief at Ukraine World magazine, characterized as oligarchs and former officials being marginalized after the country’s 2014 revolution.

On television stations they control and on social media, these powerful players in internal Ukrainian politics have sharply criticized economic policies encouraged by Western donors, suggesting a plot “to sell out Ukrainian land to the West and destroy the Ukrainian economy,” Mr. Yermolenko said.

The shuffle also shows a pivot by Mr. Zelensky away from a policy of bringing young professionals with little experience into government, Mr. Yermolenko said.

After Mr. Zelensky won the presidency last year as a political neophyte, he made a point of hiring aides and ministers similarly unschooled in politics, saying Ukraine needed to turn a new page. He has since acknowledged a need for seasoned administrators.

Among those Mr. Zelensky fired on Wednesday was the minister of health, Zoryana Skaletska, who last month volunteered to enter a quarantine center for people evacuated from China and possibly infected with the novel coronavirus.

Ms. Skaletska said she wanted to dispel the stigma from people isolated while awaiting test results. Under the rules, she was required to remain on the site for two weeks after entering and had one day remaining on her quarantine when she was fired.

“Thank you for the courage but in our medicine, courage cannot be a one-off action,” Mr. Zelensky said, faulting her for poor service in Ukrainian hospitals.