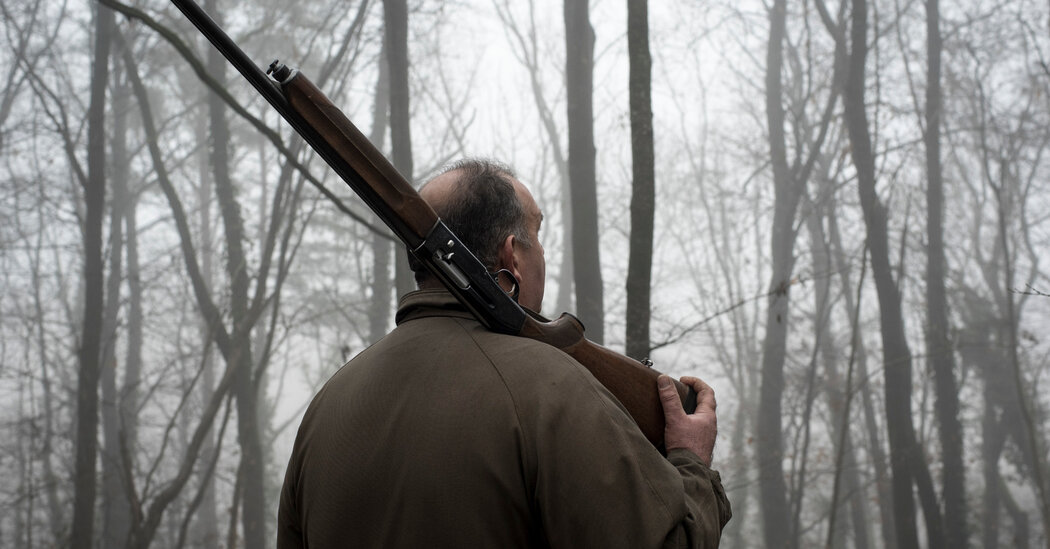 The justices contemplate expanding arms rights in the wake of mass shootings.

Once again, the country is awash in gun violence. And once again, the justices have to decide whether to inject the Supreme Court into the middle of the gun debate. Will the first of those two sentences inform the second?

That’s really the question now, it seems to me. There is little doubt that the necessary four votes exist to add a Second Amendment case to the docket for decision, and there are plenty of candidates to choose from. One case under active consideration challenges New York State’s restriction on carrying a concealed gun outside the home. The justices have taken it up at their private conference twice this month and are scheduled to do so again on Friday.

A case from New Jersey raising the same challenge to a similar constraint was filed at the court on April 2. There are other Second Amendment cases in the pipeline, propelled toward the court in the expectation that Justice Amy Coney Barrett’s arrival has finally tipped the balance toward action on the gun rights agenda.

Thinking about that prospect in light of the banner headline that ran across the front page of The Times on Saturday — “In Indianapolis, 3rd Massacre in 3 Months — brought to mind a lecture that William Rehnquist, 15 years into his Supreme Court tenure as an associate justice and on the eve of becoming chief justice, gave in 1986 at Suffolk University Law School in Boston. He later published it in the school’s law review under the title “Constitutional Law and Public Opinion.”

“The judges of any court of last resort such as the Supreme Court of the United States work in an insulated atmosphere in their courthouse where they sit on the bench hearing oral arguments or sit in their chambers writing opinions,” he said. “But these same judges go home at night and read the newspapers or watch the evening news on television; they talk to their family and friends about current events. Somewhere ‘out there’ — beyond the walls of the courthouse — run currents and tides of public opinion which lap at the courthouse door.”

I didn’t take the future chief justice to suggest that judges rely on public opinion polling, but to be making a larger point: that judges are members of a community and can’t be oblivious to the events that buffet and shape it. Perhaps it’s not a profound insight, but it’s something that judges don’t often acknowledge.

Thinking about it, I wondered whether today’s justices, having no doubt heard about the three mass shootings in three months, also noticed how quickly last week’s headline became outdated: nine young people shot on Saturday at a 12-year-old’s birthday party in Louisiana; a former deputy sheriff accused of a triple murder in Austin on Sunday; a deadly shooting in a supermarket on Long Island on Tuesday morning.

The New York case under consideration was brought by the same National Rifle Association affiliate whose Second Amendment case in the last term consumed a great deal of the justices’ energy. It was almost precisely a year ago, last April 27, that a sharply divided court dismissed that case as moot after months of internal wrangling. The question in New York State Rifle & Pistol Association v. City of New York was the validity under the Second Amendment of a regulation that prohibited licensed gun owners from carrying their guns to a second home or a shooting range outside the city.

It was the first Second Amendment case the court had accepted in more than a decade. Chances were good that the justices were going to use it to expand the tight boundaries the court’s 2008 Heller decision had drawn around the individual gun ownership right that it established. So the city avoided a potential loss for gun regulation by repealing the ordinance and leaving the court with nothing to decide. The unsigned two-paragraph decision dismissing the case drew dissenting votes from Justices Samuel Alito, Clarence Thomas, Neil Gorsuch and Brett Kavanaugh. Justice Ruth Bader Ginsburg was still on the court and voted, along with Chief Justice John Roberts, in the majority.

The new New York State Rifle & Pistol Association case challenges the state law that limits most licenses to carry a gun outside the home to those applicants who can show that “proper cause exists.” The statute does not define “proper cause,” and judicial interpretations over the years have defined it narrowly to require something more than a generalized desire to have a gun at hand for self-defense; there has to be something that sets the individual’s circumstances apart from the general public. (New York prohibits “open carry,” with licenses available only for carrying a concealed weapon.) The U.S. Court of Appeals for the Second Circuit affirmed dismissal of the lawsuit on the basis of its own longstanding precedent.

Paul Clement, who since his years as solicitor general during the George W. Bush administration has handled many gun rights cases, wrote in his petition to the court that “the Second Amendment does not exist to protect only the rights of the happy few who distinguish themselves from the body of ‘the people’ through some ‘proper cause.’” Most federal appeals courts have ruled on similar laws as the Second Circuit has, but not all, and disagreement among the lower courts is usually a good predictor of the Supreme Court’s willingness to take up an issue.

By the same token, unanimity in the lower courts is usually a deterrent to Supreme Court review. On Monday, the court turned down three cases challenging a federal law that imposes a lifetime ban on gun ownership on people who have been convicted of felonies and some misdemeanors. The cases were all brought by individuals convicted of nonviolent crimes who argued that the prohibition violated their Second Amendment rights. The cases were of more than usual interest because Justice Barrett, while still a federal appeals court judge, had weighed in on the same issue in an opinion dissenting from a decision that upheld the lifetime ban. The plaintiff in that case was a man convicted of Medicare fraud, a first-time offender with no history of violence.

In her opinion, Judge Barrett wrote that there is no “virtue limitation” to the Second Amendment. Quoting from an opinion by Justice Alito in a separate Second Amendment context, she added that applying a lifetime ban on gun ownership to such a person “treats the Second Amendment as a ‘second-class right, subject to an entirely different body of rules than the other Bill of Rights guarantees.’” Her dissenting opinion in Kanter v. Barr is what has encouraged gun rights groups to suppose that they can count on Justice Barrett when the time comes.

The “second-class right” charge is popular among the conservative justices and the gun-rights community. I’ve always been puzzled by the notion that any limitation on the Second Amendment converts it into some sort of second-class right. I can’t think of a constitutional right that the Supreme Court has interpreted as absolutely unlimited — certainly not, for example, the Fourth Amendment’s protection against “unreasonable searches and seizures,” to which conservative judges have attached countless limitations over many years.

Eleven years post-Heller, the decision itself has become more of a symbol and talking point than a legal opinion that people actually take the trouble to read.

If they did, they would see Heller as the limited decision that it was. Yes, it took the unprecedented step of interpreting the Second Amendment as conferring an individual right to own a gun, but the court applied that new right to the unusual circumstance of a District of Columbia law that prohibited private gun ownership. Only the District and Chicago had such a strict law. The court held only that individuals have a constitutional right to own a gun and to keep it at home for self-defense. For the vast majority of people in the country, Heller changed nothing as a practical matter; it constitutionalized a right that gun owners already enjoyed under state and local laws.

Whether the Second Amendment also protects a right to walk down the street, or onto a college campus, or into a supermarket, a warehouse, a State Capitol, or a 12-year-old’s birthday party carrying a gun are questions that Heller did not answer. The current court can answer those questions in the affirmative if it so chooses. It has the votes. We will soon see whether it has the discipline and common sense to stay its hand.