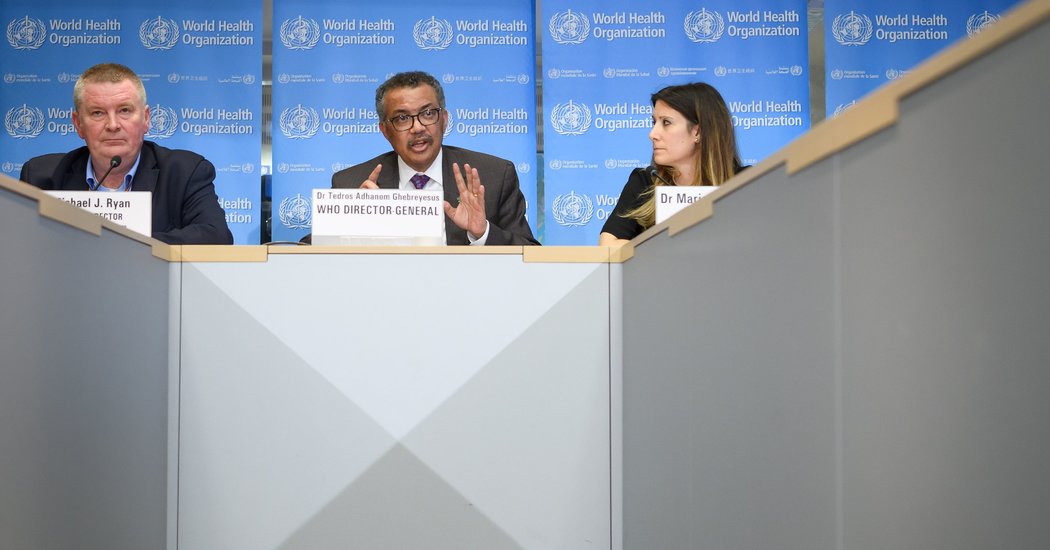 WASHINGTON — Fox News pundits and Republican lawmakers have raged for weeks at the World Health Organization for praising China’s handling of the coronavirus crisis. On his podcast, President Trump’s former chief strategist, Stephen K. Bannon, urged his former boss to stop funding the W.H.O., citing its ties to the “Chinese Communist Party.”

And inside the West Wing, the president found little resistance among the China skeptics in his administration for lashing out at the W.H.O. and essentially trying to shift the blame for his own failure to aggressively confront the spread of the virus by accusing the world’s premier global health group of covering up for the country where it started.

Mr. Trump’s decision on Tuesday to freeze nearly $500 million in public money for the W.H.O. in the middle of a pandemic was the culmination of a concerted conservative campaign against the group. But the president’s announcement on the W.H.O. drew fierce condemnations from many quarters.

The U.S. Chamber of Commerce said cutting its funding was “not in U.S. interests.” Speaker Nancy Pelosi called the decision “dangerous” and “illegal.” Former President Jimmy Carter said he was “distressed,” calling the W.H.O. “the only international organization capable of leading the effort to control this virus.”

Founded in 1948, the W.H.O. works to promote primary health care around the world, to improve access to essential medicine and to help train health care workers. During emergencies, the organization, a United Nations agency, seeks to identify threats and mitigate the risks of dangerous outbreaks, especially in the developing world.

In recent years, the United States has been the largest contributor to the W.H.O., giving about $500 million a year, though only about $115 million of that is considered mandatory as a part of the dues that Congress agreed to pay as a member. The rest was a voluntary contribution to combat specific health challenges like malaria or AIDS.

How Mr. Trump’s order to freeze the group’s funding while officials conduct a review of the W.H.O. would be carried out was not clear. Congressional Democrats who oversee foreign aid said they did not believe Mr. Trump had the power to unilaterally stop paying the nation’s dues to the W.H.O. Congressional aides cited a Government Accountability Office report in January that concluded that the administration could not simply ignore congressionally directed funding for Ukraine simply because Mr. Trump wanted to.

A senior aide to House Democrats said they were reviewing their options in the hopes of keeping the money flowing. But Democrats conceded that Mr. Trump most likely has wide latitude to withdraw the voluntary contributions to specific health programs run by the W.H.O.

White House officials say Mr. Trump was moved to act in part by his well-known anger about sending too much of the public’s money to international organizations like NATO and the United Nations. And they said he agreed with the criticism that the W.H.O. was too quick to accept China’s explanations after the virus began spreading.

They cited a Twitter post by the W.H.O. on Jan. 14 saying that the Chinese government had “found no clear evidence of human-to-human transmission of the novel #coronavirus” as evidence that the W.H.O. was covering up for China. And they noted that in mid-February, a top official at the W.H.O. praised the Chinese for restrictive measures they insisted had delayed the spread of the virus to other countries, saying, “Right now, the strategic and tactical approach in China is the correct one.”

“It is very China-centric,” Mr. Trump said in announcing his decision on Tuesday in the Rose Garden.

“I told that to President Xi,” he said, referring to Xi Jinping of China. “I said, ‘The World Health Organization is very China-centric.’ Meaning, whatever it is, China was always right. You can’t do that.”

Public health experts say the W.H.O. has had a mixed record since the coronavirus emerged in late December.

The health organization raised early alarms about the virus, and Dr. Tedros Adhanom Ghebreyesus, the group’s director general, held almost daily news briefings beginning in mid-January, repeating a mantra: “We have a window of opportunity to stop this virus. But that window is rapidly closing.”

But global health officials and political leaders — not just Mr. Trump — have said the organization was too willing to accept information supplied by China, which still has not provided accurate numbers on how many people were infected and died during the initial outbreak in the country.

On Wednesday, Scott Morrison, the prime minister of Australia, called it “unfathomable” that the W.H.O. had issued a statement supporting China’s decision to allow the reopening of so-called wet markets, the wildlife markets where the virus is believed to have first spread to humans. And in Japan, Taro Aso, the deputy prime minister and finance minister, recently noted that some people have started referring to the W.H.O. as the “Chinese Health Organization.”

But defending the W.H.O. on Wednesday, Dr. Michael Ryan, the executive director of its emergencies programs, cited the early warning it sounded.

“We alerted the world on January the Fifth,” Mr. Ryan told reporters.

“W.H.O. is not only fighting Covid-19,” he said. “We’re also working to address polio, measles, malaria, Ebola, H.I.V., tuberculosis, malnutrition, cancer, diabetes, mental health and many other diseases and conditions.”

Mr. Trump’s decision to attack the W.H.O. comes as he is under intense fire at home for a failure to respond aggressively to the virus, which as of Wednesday had claimed more than 28,000 lives and infected at least 600,000 people in the United States.

The president publicly shrugged off the virus throughout January and much of February, repeatedly saying that it was under control. He said in mid-February that he hoped the virus would “miraculously” disappear when the weather turned warm.

Mr. Trump barred some travel from China in late January, a move that health experts say helped delay widespread infection. But he also presided over a government that failed to make testing and medical supplies widely available and resisted calling for social distancing that allowed the virus to spread for several critical weeks.

The president’s decision to freeze the W.H.O. funding was backed by many of his closest aides, including Peter Navarro, his trade adviser, and key members of the National Security Council, who have long been suspicious of China. Mr. Trump himself has often offered contradictory messages about the country — repeatedly saying nice things about Mr. Xi even as he wages a fierce, on-again, off-again trade war with China.

“China has been working very hard to contain the Coronavirus,” Mr. Trump tweeted on Jan. 24. “The United States greatly appreciates their efforts and transparency.”

At a meeting of his coronavirus task force on Friday, Mr. Trump polled all of the doctors in the room about the W.H.O., according to an official who attended the meeting. Dr. Anthony S. Fauci, the nation’s top infectious disease expert, said that the W.H.O. had a “China problem,” and then others around the room — including Dr. Deborah L. Birx, who is coordinating the U.S. response, and Dr. Robert R. Redfield, the director of the Centers for Disease Control and Prevention — agreed with the statement, the official said.

But the president’s critics assailed the timing of the announcement, saying that any assessment of the W.H.O. should wait until the threat was over.

Among those questioning the president’s decision to act now was Dr. Redfield, who heaped praise on the W.H.O. during an appearance on Wednesday on “CBS This Morning,” saying that questions about what the group did during the pandemic should be left until “after we get through this.”

Dr. Redfield said that the W.H.O. remained “a longstanding partner for C.D.C.,” citing efforts to fight Ebola in Africa and the cooperation to limit the spread of the coronavirus. And he added that the United States and the W.H.O. have “worked together to fight health crises around the world — we continue to do that.”

Ms. Pelosi said Mr. Trump was acting “at great risk to the lives and livelihoods of Americans and people around the world.” And in its statement, the U.S. Chamber of Commerce said that it supported reform of the W.H.O., but that “cutting the W.H.O.’s funding during the Covid-19 pandemic is not in U.S. interests given the organization’s critical role assisting other countries — particularly in the developing world — in their response.”

In a tweet, Bill Gates, the founder of Microsoft and later a global health foundation, said the decision to end funding “during a world health crisis is as dangerous as it sounds.”

He added: “Their work is slowing the spread of Covid-19 and if that work is stopped no other organization can replace them. The world needs @WHO now more than ever.”