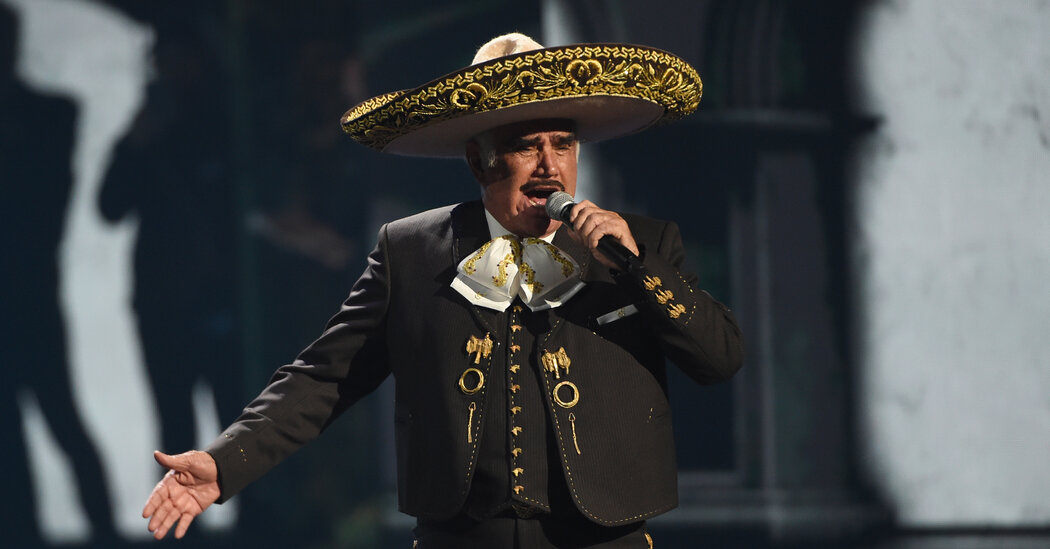 The singer’s brand of machismo may have frayed, but for many, he was the ideal of what it means to be hard-working, hard-loving Mexican man.

The singer Vicente Fernández was “El Ídolo” and “El Rey” — the idol of Mexico and the king of ranchera music. These lofty titles reinforced his profound cultural influence, which spanned decades and countries far beyond Mexico.

Fernández, who died on Sunday at 81, long represented the ideal of the Mexican man, proud of his roots and himself. His music often centered on love and loss, though also with a high degree of confidence and attitude. His iconic rendition of the song “Volver Volver” propelled him to fame, but it’s in another major hit, “Por Tu Maldito Amor,” that his agony and longing are on full display.

In 2016, Fernández, known as Chente, recorded “Un Azteca en el Azteca,” a live album featuring some of his biggest hits, at the Estadio Azteca in Mexico City, the largest venue in the country, which holds over 87,000. It was billed as his farewell concert, and it also turned out to be the last before he experienced a series of health problems.

During his performance of “Por Tu Maldito Amor” (“Because of Your Damn Love”), the sea of fans sing the chorus back to him.

It’s become a musical standard at any special occasion hosted by someone of Mexican descent — everyone knows the lyrics. The night doesn’t begin to end until someone starts pouring tequila, plays this song, and belts out a grito in their best Chente voice — operatic and soaring with a tinge of melancholy.

Despite the subject matter of his music, it was always tempered by his manly persona — he dressed in full charro regalia, took swigs from fans’ bottles and performed atop his horses. Fernández’s brand was this: a brawny, mustachioed man gallantly fighting for the woman he loves.

And his persona was not unlike the idols that preceded him, Pedro Infante and Jorge Negrete, Mexico’s earliest ranchera stars who rose to fame in the 1930s with their interpretations of love songs. And like them, he parlayed his music career into acting roles. Fernández starred in more than 30 films with titles like “El Macho” and “Todo Un Hombre,” in which he plays hard-living rancheros who romance beautiful women.

To be sure, after so many decades of influence, Fernández and his work will remain beloved. His music will endure in the Mexican songbook. But his brand of machismo has frayed — at least for a younger generation less interested in a narrow view of what it means to be a man.

In 2019, Fernández gave an interview to “De Primera Mano,” a Mexican entertainment news show, where he described receiving a cancer diagnosis in 2012 after doctors found a tumor on his liver. He said they suggested he get a liver transplant, which he rejected, saying: “I’m not going to sleep next to my woman with the organ of another man, not knowing if he was a homosexual or a drug addict.”

There was an outcry on social media over the homophobic remarks, and even his son, Vicente Fernández Jr., tried to walk back his father’s interview, asserting that his father’s music was for everyone.

Regardless of Fernández’s views on sexuality — though they seem to be pretty apparent — Vicente Jr. might be right. After decades in the spotlight, Chente’s music no longer belongs just to him — it belongs to the people. His musical influence extends far beyond Mexico, permeating much of Latin America and the United States. Fernández’s popularity hasn’t waned, as demonstrated by the memorials and outpouring of condolences on Sunday, ranging from the likes of President Biden to that other “king,” the country singer George Strait.

Fernández wasn’t one to shy away from politics. In Mexico, he was a known supporter of the Institutional Revolutionary Party, which long held power in the country. And his influence extended into U.S. politics. He performed at the 2000 Republican National Convention, where George W. Bush secured the nomination. But more recently he supported Democratic candidates in the U.S., even writing a corrido for Hillary Clinton during her 2016 presidential run.

Though he is emblematic of a type of dated machismo, many people will still choose to listen to his music and belt out his songs at karaoke or at a cousin’s wedding. Perhaps another one of his memorable songs, “El Rey,” explains this dichotomy.

You probably don’t remember the first time you heard one of his songs because they were always a part of the soundscape, imprinted in your mind. His music is imbued in the fabric of American Latino culture, much like in the rest of Latin America.