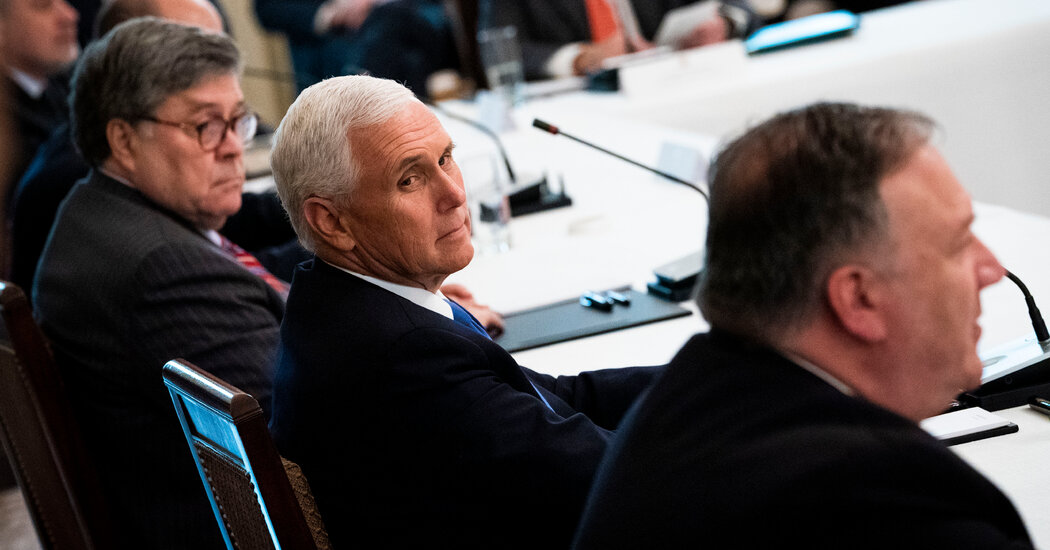 OK, people, I know you’re feeling a little wan and helpless these days. Sure does seem like a long time until November.

So let’s take an early vote and pick Donald Trump’s Worst Cabinet Member. The competition is intense this year. Some days it feels as if everybody in the administration is trying to grab the grand prize. That they’re running around with a list in their pocket titled Things to Screw Up.

Vice President Mike Pence has been a faithful hanger-on from Day 1. He’s now doing double duty as Trump’s coronavirus czar. In which capacity he predicted on April 24 that the epidemic would be “behind us” by Memorial Day weekend.

Last season’s winner, Attorney General William Barr, certainly hasn’t been resting on his laurels. At a recent House Judiciary Committee hearing, he had to be prodded twice before acknowledging that presidential candidates aren’t supposed to accept foreign assistance. When asked if he agreed with Trump’s shocking suggestion that a president could move Election Day, Barr said, “I’ve never looked into it.”

Nothing like the tried-and-true Trump veterans when it comes to top-notch terrible. But there’s new talent, too, thanks to all the shuffling that keeps going on. Chad Wolf, the acting head of homeland security, is the fifth person to lead the department in the current administration. If he can hang on until after the election, he’ll have racked up more than a year on the job — a Trump administration achievement that is no doubt due to all the prior experience Wolf had as a travel industry lobbyist.

The postmaster general is no longer officially in the cabinet, for reasons way too dense to explain. But we’re going to leave Louis DeJoy in the mix because of his vigorous efforts to wreck the postal system — a goal that we’re sure has nothing to do with the president’s hatred of voting by mail. DeJoy’s top qualification for the job appears to be more than $2 million in donations to Republican causes during the Trump regime.

Did we mention his wife has been nominated to be ambassador to Canada?

The Worst contenders keep on coming: Secretary of Commerce Wilbur Ross Jr., another previous winner, has been relatively quiet recently. Literally, since he reportedly keeps dozing off at meetings. The man is 82 — what do you expect? But he’s still plugging away at the administration’s priorities, like shutting down the census count four weeks early.

Interior Secretary David Bernhardt is a former lobbyist for the oil and gas industries, a résumé you will notice crops up frequently. This has given him the in-depth understanding that allowed him to take a lead in the administration’s massive financial relief package for oil and gas companies.

Bernhardt also seems to have been one of the central administration players in the drama of Lafayette Square, when protesters were ejected by military police to make way for Trump and his Bible.

But he’s not volunteering any information. “The Babe Ruth of stonewalling,” said Ron Wyden, the Democratic senator from Oregon who’s been following Bernhardt’s career for a long time. Bernhardt traveled recently to Wyden’s home state where he met with Native American tribes — and refused, Wyden noted, to wear a mask.

If you’re into the environment and want another option, there’s E.P.A. head Andrew Wheeler, a former lobbyist for — wait for it — energy companies. His latest crusade is extending the life of gigantic pits of coal sludge.

Or how about U.S. trade representative Robert Lighthizer? He’s not in the news as much as some of the others, but we’ll always remember his speech defending Trump’s China wars, revealing, “I don’t know what the end goal is.”

More! How about health and human services head Alex Azar? He’s been on the job a couple of years now, which by Trump standards makes him a hardened veteran. When he’s not busy failing to respond to the pandemic, one of his other missions is overseeing the administration’s attempts to gut the Affordable Care Act and replace it with … some other thing.

You don’t have to reward splashy bad behavior if you prefer the more modest figures who prefer to screw everything up from behind the scenes. Like Education Secretary Betsy DeVos, whose standing in the Worst poll soared when people realized they had a secretary of education who didn’t like public schools.

Secretary of Transportation Elaine Chao may not have done much for infrastructure, but she sure is connected. Wife of Mitch McConnell, Chao is also a member of a wealthy and powerful family that’s deeply into shipping contracts. That got up to $1 million from our government’s recession-fighting Paycheck Protection Program.

So — who’s your favorite? Send me a Worst Cabinet Member pick in the comments. Voting’s open until midnight Eastern time on Sunday, and we’ll announce the winners next week.