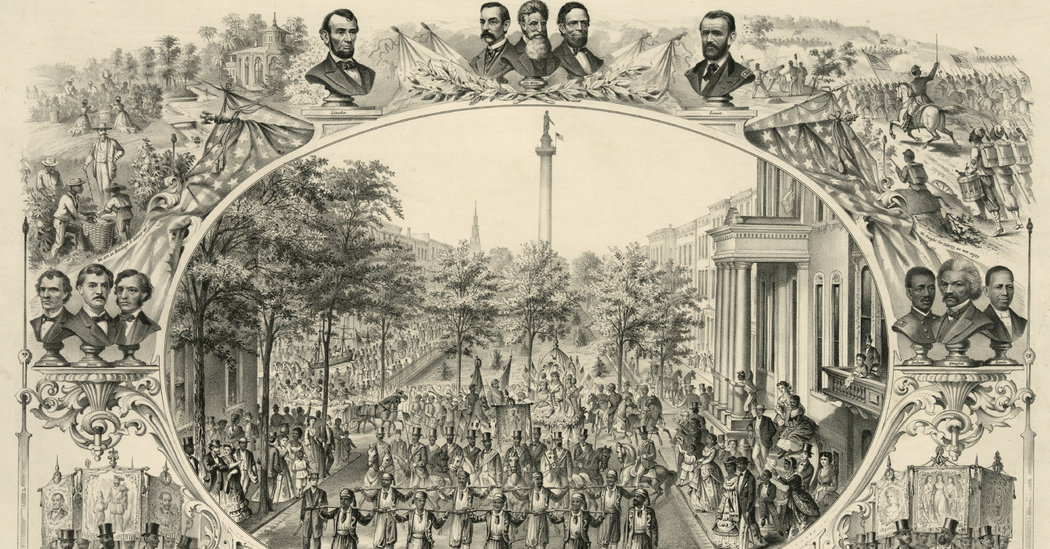 Writing in The New York Times 150 years ago this April 11, Frederick Douglass celebrated the ratification of the 15th Amendment, which at long last banned racial discrimination in voting nationwide. He hailed the extension of the franchise to all eligible African-American men as a “revolution.”

“We were always men,” he wrote. “Now we are citizens and men among men.”

What did Douglass mean? Perhaps the most persistent political debate of his lifetime had been about what exactly the founders meant when they wrote that “all men are created equal.” After all, by the start of the Civil War, free African-American men were, with few exceptions, excluded from the most fundamental element of democratic life: the right to vote.

The silences and contradictions of the Declaration of Independence were glaring. Thomas Jefferson himself confessed his “suspicion only” in his “Notes on the State of Virginia,” written in the 1780s, that “the blacks, whether originally a distinct race, or made distinct by time and circumstances, are inferior to the whites in the endowments of both body and mind.” Intentionally or not, Jefferson was advancing the idea that all men were not, well, “men,” at least not in the same way.

Douglass had become a living argument for black Americans’ equal manhood. Pressing the point in his most famous address, “What to the Slave Is the Fourth of July?,” he turned to the law to make plain what should have been obvious to all: “The manhood of the slave is conceded. It is admitted in the fact that Southern statute books are covered with enactments forbidding, under severe fines and penalties, the teaching of the slave to read or to write. When you can point to any such laws in reference to the beasts of the field, then I may consent to argue the manhood of the slave.”

Still, Douglass faced a culture that was not ready to embrace such proof or logic. His position threatened the most basic justification for slavery since the expansion of the slave trade in the 17th and 18th centuries.

Douglass thought the 15th Amendment had finally ended the argument about black humanity. The fact that the amendment excluded women — a wrong that would take another 50 years of struggle to right — only underscored the link between voting and manhood.

From the time Douglass had emerged as a public figure in the 1840s, he had been at war with two strains of mid-19th-century thought that denied the humanity of people of African descent: the legal and the scientific.

In the 1857 Dred Scott decision, the U.S. Supreme Court Chief Justice Roger Taney quoted the language of the Declaration and asserted that the men who framed it “knew that it would not in any part of the civilized world be supposed to embrace the negro race, which, by common consent, had been excluded from civilized Governments and the family of nations, and doomed to slavery. “

The received scientific wisdom of the day drew from the same pool of “self-evident truths” as did Chief Justice Taney. The Swiss naturalist Louis Agassiz offered the same rationale for slavery. Agassiz had come to believe that people of different races had not descended from a single Adam, but rather from different Adams, who lived in different parts of the world. Therefore, he said, it would be a mistake “to assume that races have the same abilities, enjoy the same powers, and show the same natural dispositions, and that in consequence of this equality they are entitled to the same position in human society.”

Douglass knew that all else in the quest for the abolition of slavery, and equal status and protection under the laws depended on the refutation of the scandalous allegation that the genetic origins and social and cultural evolution of black people constituted prima facie justification for their second-class status.

He had to devote much of his oratory simply to “proving” the humanity of black people. Speaking at Western Reserve College in 1854, in one of the first commencement addresses ever delivered by an African-American, Douglass deconstructed word by word a recent editorial in the notoriously racist Richmond Examiner that argued that “the negro” did not have the same right to liberty and the pursuit of happiness as the white man. The reason: “BECAUSE HE IS NOT A MAN.”

Douglass, in his remarks, made his own declaration: “Tried by all the usual, and all the unusual tests, whether mental, moral, physical, or psychological, the negro is a MAN — considering him as possessing knowledge, or needing knowledge, his elevation or his degradation, his virtues, or his vices — whichever road you take, you reach the same conclusion: The negro is a MAN.”

Sixteen years later, when the 15th Amendment was ratified, Douglass knew that while one battle may have been won, the forces of white supremacy and pro-slavery stubbornly persisted, as he warned in his speech “Our Composite Nationality” in 1869. Unfortunately, he was right: The promises of Reconstruction gave way to the destructive emergence of Jim Crow. In the continued need for African-Americans to account for their own humanity, we see permutations of Douglass’s struggle: from the British antislavery catchphrase popularized in the 1780s, “Am I Not a Man and a Brother?,” to the Memphis sanitation workers’ signs proclaiming “I Am a Man” on the eve of Martin Luther King Jr.’s assassination and in the very phrase “Black Lives Matter.”

Much has been made lately of the metaphor that anti-black racism is part of the DNA of American culture. Some have taken offense, presuming incorrectly that the genetic allusion suggests that America is unalterably racist. Rather, the metaphor means to say that anti-black racism has been passed down through the generations as an elemental aspect of American history and American culture.

Genetics is not determinism. The 20,000 or so genes that compose the human genome can each be silenced or amplified. Think of our genomes as akin to a piano keyboard: The melodies it yields depend upon how it’s played. Racism, like anti-Semitism, is a chord that we can choose to play or not. Or think of racism as a cultural mutation. The introduction of that tainted mutation into our country’s founding — and the weight it continues to place on black people to prove themselves worthy of inclusion over and over again — is what is meant by racism being part of our DNA. Mutations cannot be silenced by pretending they are not there; they cannot be silenced by being censored or shouted down. Mutations do not magically go away. But they can be combated, as the 15th Amendment sought to combat the long history of denying the manhood of black American men.

Squarely confronting the limits inscribed in our founding documents is the beginning, at long last, of overcoming them. If we are learning to treat inherited diseases such as cystic fibrosis and sickle cell, passed down for generations in our DNA, surely we can learn to address the founding mutation of racism.

Some are fond of saying that racism lives in the past and that African-Americans should “get over it.” But it is the past — particularly the doubts at the founding over who, in fact, was encompassed in the grand claim that “all men were created equal” — that Douglass felt compelled to address with the greatest urgency and which our country still struggles to resolve today.

Henry Louis Gates Jr. is the director of the Hutchins Center for African & African American Research at Harvard University and the author of “Stony the Road: Reconstruction, White Supremacy, and the Rise of Jim Crow and host of Reconstruction: America After the Civil War.”