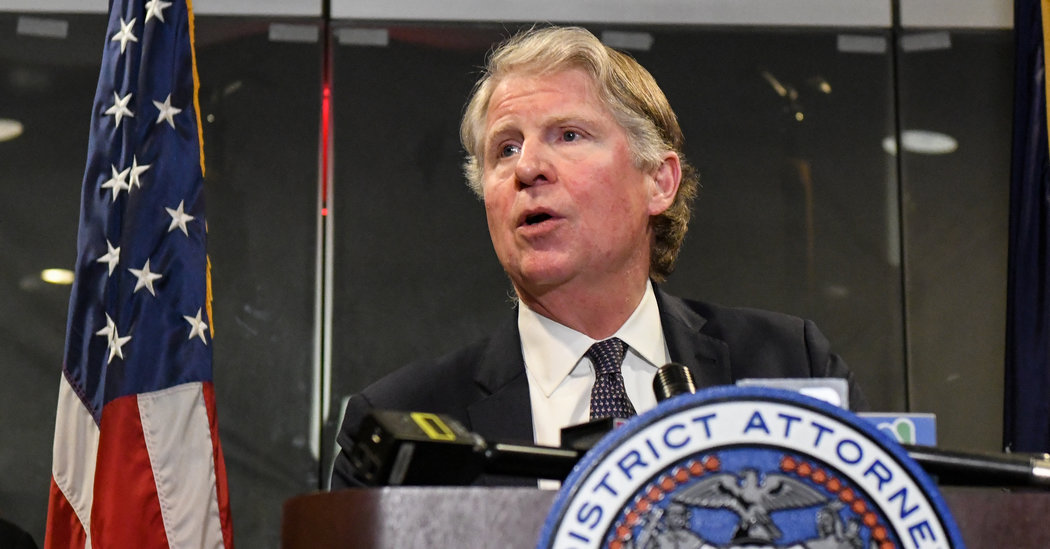 For weeks, the Manhattan district attorney, Cyrus R. Vance Jr., sat at the front of the courtroom at Harvey Weinstein’s rape trial, right behind the prosecution’s table, hanging on the words of witnesses. He was even there waiting for the verdict during jury deliberations, a highly unusual step for a big-city district attorney.

Mr. Vance had a lot at stake. He had been severely criticized for not bringing charges against Mr. Weinstein five years earlier, before the producer became a symbol of sexual harassment and the #MeToo movement.

So when the jury found Mr. Weinstein guilty of two felony sex crimes, it was not just a major legal victory for Mr. Vance but a shot at redemption. “This is the new landscape for survivors of sexual assault in America,” Mr. Vance declared before a phalanx of reporters and flashing cameras. “This is a new day.”

Mr. Vance, who leads one of the most storied district attorney’s offices in the country, was the first prosecutor to bring charges against Mr. Weinstein, and the verdict marked a triumphant moment in the career of a liberal who first ran as a champion on women’s issues.

Yet, as much as the prosecutor wanted to turn the page, he remained embattled, still struggling to regain the support of feminists and victims’ advocates who have faulted his office’s handling of sex crimes.

“This verdict is a resounding victory — I think it gives the Manhattan district attorney’s office the opportunity to hit a reset button,” said Jane Manning, an advocate for rape victims and a former New York City sex crimes prosecutor. But she said the office has to remain aggressive about prosecuting sex crimes. “As important a conviction is in the Weinstein case, we care about what happens in every case.”

Elected officials and women’s rights advocates who staged protests during the trial criticized the way Mr. Vance’s sex-crimes unit dealt with other cases, including a no-jail plea deal for Dr. Robert Hadden, a prominent gynecologist who had abused his patients.

Jumaane Williams, the city’s public advocate, who led one of the protests, said Mr. Vance’s name was “irreparably tarnished.”

“I don’t think history is going to be kind here,” he said.

That outrage crested when a dozen New York City councilwomen charged earlier this month that Mr. Vance had failed victims of sexual assault and should resign.

There have been signs of turmoil inside Mr. Vance’s office as well. Martha Bashford, the longtime chief of the sex crimes division, who had declined to prosecute Mr. Weinstein five years ago, announced her retirement as the trial was winding down.

In an interview, Mr. Vance expressed regret to survivors of sexual assault who have left his office “feeling disappointed or worse — not listened to.” Mr. Vance said he had asked a nonprofit that specializes in gender-based violence to evaluate how his sex crimes unit handles cases and deals with victims.

Although Mr. Weinstein’s conviction — he was found guilty of rape and criminal sexual assault but not predatory sexual assault — has strengthened Mr. Vance’s political position, a growing list of challengers has signaled they will take him on in 2021 in the Democratic primary. They include two civil rights lawyers, Tahanie Aboushi and Janos Marton; a Manhattan state assemblyman, Dan Quart, and a former federal prosecutor, Alvin Bragg.

George Artz, a longtime political consultant, said that if Mr. Vance decides to run again, he would still be a formidable incumbent, especially with the Weinstein verdict on his résumé.

“Given the monumental victory here, I think he would win against the field that has arrived so far,” said Mr. Artz, who advised Mr. Vance in his first campaign in 2010. “There might be criticism of him, but the Weinstein case will be his legacy.”

Mr. Vance, 65, who succeeded Robert M. Morgenthau, who held the job for 35 years, declined to say whether he will in fact seek re-election. His campaign coffers had only $29,000 in his last filing, far less than he spent during his 2017 race when he faced only token opposition. “When the right time comes I will make an announcement,” he said.

He said he does not make decisions with his legacy in mind. He has won praise for modernizing the office’s use of data to target violent criminals, spending millions to clear a backlog of rape kits, setting up a special domestic violence unit and routinely prosecuting sex traffickers.

“Ultimately, my legacy, such as it is, is to leave this office to be an office capable of handling all the variety of crimes that we have in the 21st century and to be modern about the way we investigate cases,” he said.

Before the #MeToo movement, Mr. Vance’s office had a reputation for being conservative in sex-crimes prosecutions.

His decision to bring the case against Mr. Weinstein was a gamble, several criminal lawyers said, because the two main accusers — Miriam Haley and Jessica Mann — had consensual sex with Mr. Weinstein after the attacks. Many prosecutors would not have taken the chance, fearing that the women’s credibility would have been shredded on cross-examination.

Mr. Vance said he decided to press ahead despite the complex relationships the two women had with Mr. Weinstein.

“We felt that what we had was raw, open and honest, and they were credible and believable even if they weren’t the typical witness that a courtroom expects to see,” he said.

When he made the decision in May 2018, Mr. Vance was under intense public pressure.

He had been hammered for declining to bring charges in 2015 when a Filipina-Italian model accused Mr. Weinstein of groping her breasts and shoving his hand up her skirt during a meeting at his office in TriBeCa. The governor had asked the attorney general to review that decision, and feminists from organizations like the National Organization for Women protested, demanding he take action against Mr. Weinstein.

Mr. Vance had decided not to prosecute even though the model, Ambra Battilana Gutierrez, had recorded Mr. Weinstein the next day apologizing for touching her. One reason, prosecutors said, was a worry that Ms. Battilana Gutierrez would not be believed because she had given contradictory accounts to authorities in a sexual assault case in Italy.

This week, Mr. Vance said calculations about the viability of a case like Ms. Battilana Gutierrez’s had changed in the intervening years, as thousands of women had aired their stories of sexual abuse and harassment as part of the #MeToo movement.

It was not the first time Mr. Vance had drawn criticism for his handling of a sex crime case involving a prominent man. A year after taking office, he was faulted by some for dropping charges against Dominique Strauss-Kahn, a French politician accused of sexually assaulting a hotel housekeeper. That case was dropped because prosecutors learned the victim had fabricated a previous assault.

Then, in 2015 it was revealed that a veteran prosecutor in Mr. Vance’s office made a highly unusual request in 2011 when she argued for Jeffrey Epstein’s sex offender status to be reduced to the lowest classification despite allegations that he had molested dozens of teenage girls.

Mr. Vance’s critics also point to the case of Mr. Hadden, a gynecologist with Columbia University and NewYork-Presbyterian Hospital who was accused of sexually assaulting 19 women, including Evelyn Yang, the wife of former Democratic presidential candidate Andrew Yang.

Prosecutors said last year they had entered into a no-jail plea agreement with Mr. Hadden because they believed a defense lawyer would attack his accusers’ credibility.

The backlash against Mr. Vance intensified after Ms. Yang gave a television interview in mid-January.

“For every Weinstein or Epstein — or Hadden, in my case — where the authorities are forced into a public reckoning, we know there are many other predators out there who continue to get away with assault,” Ms. Yang said.

Last week, Mr. Vance said his office will review new allegations against Mr. Hadden, as more women have come forward. But his critics said he was merely caving to mounting public pressure.

Marissa Hoechstetter, the first woman to publicly accuse Mr. Hadden of sexual abuse, said the district attorney should not “get some special credit for doing it now.”

Speaking this week, Mr. Vance and his chief assistant, Karen Friedman Agnifilo, acknowledged that the office would have taken a different approach in its handling of the Hadden case had it happened today. Ms. Friedman Agnifilo, who approved the no-jail plea deal, said she regretted the decision.

Mr. Vance’s political opponents have pointed out that the defense lawyers who persuaded the district attorney’s office not to pursue charges or to agree to a lenient plea deal in some high-profile cases were also big donors to Mr. Vance’s campaigns.

Mr. Vance denied his office gives special treatment to defendants with well-connected lawyers or had shied away from challenging sex crime cases.

“What few people understand is that the decisions in these cases in the investigations are being run by professional prosecutors — a hundred percent of whom are women — and who are not interested in politics or campaign contributions or any of that,” he said.