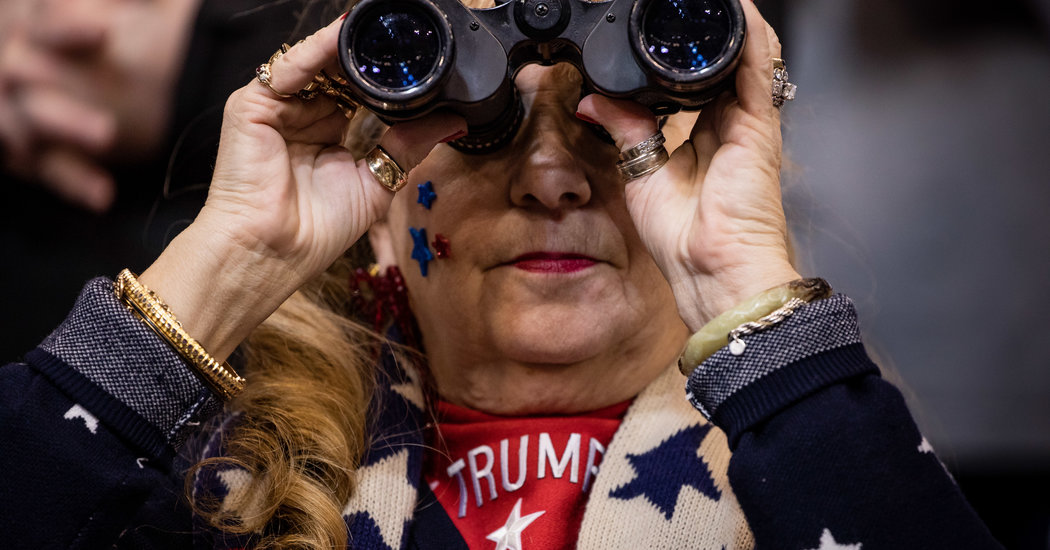 MANCHESTER, N.H. — President Trump spoke for an hour to an enthusiastic crowd of more than 11,000 at the Southern Hampshire University Arena on Monday night under banners that read “Promises Made” and “Promises Kept.” Two nights earlier, this same venue hosted the New Hampshire Democratic Party’s 100 Club dinner.

“We have more in this arena than all the other candidates in the Democratic Party,” Mr. Trump said. “One candidate today had 104 people.”

“I see them campaigning down the street. It’s really boring stuff,” Mr. Trump added. “We are going to defeat the radical, socialist democrats. We are going to win New Hampshire in a landslide.”

“Tomorrow there is a group of self-proclaimed and closeted socialists running against Donald Trump,” Ms. Guilfoyle said, which prompted loud booing from the crowd.

“In my next life I want to come back as the son of a Democrat because you can do anything you want. If I did what Hunter did, I would be in jail right now,” Donald Trump Jr. said.

“Nancy Pelosi can rip up all of my father’s accomplishments,” he added, “but she can’t rip up your spirit. And under my father, America will never be a socialist country.”

Mr. Pence came from a “Cops for Trump” event at the Sheraton Portsmouth Harborside. “Cops are for Trump because Trump is for cops,” Mr. Pence told the Manchester crowd.

For some attendees, this was their first Trump rally. Shane Stocker, a 45-year-old jet engine maker for G.E. Aviation from Lebanon, N.H., waited in line for an hour.

“I do think he’s one of the best presidents we’ve had in a while,” he said, citing tax cuts, loosening regulation and “lots more jobs.”

Mr. Stocker voted for Trump in 2016. “After the job Obama was doing, we needed a different direction,” he said. “He was breaking the law left and right and nobody was paying attention to it.”

“With Trump you don’t have to worry about it,” Mr. Stocker added. “He’s the most vetted president in our country’s history. Since he announced he was running for president they’ve been doing nothing but investigating him.”

The president “is not prim or proper,” he said. “I like that. He doesn’t sugar coat things for people. And if you don’t like it, too bad.”

José Rojas, a 38-year-old truck driver from Nashua, N.H., arrived in a shirt that read: “My rights don’t end where your feelings begin.”

Diane Aubin, 63, is a retired manager who worked at the Department of Developmental Services in Hathorne, Mass., and now lives in Litchfield, N.H. This is the fourth rally she has attended since 2016 and her second at this arena.

“I love his message. I love what he has done,” Ms. Aubin said. “He’s for the people. He’s for all of us. He doesn’t brainwash me. I get freedom of thought. I get to choose.”

After she waited in line for four hours, someone brought a Dunkin’ Donuts Box O’ Joe to share. “These are good people,” she said.

Pamela Tucker, 56, the vice chairman of New Hampshire Republican Party, came to the rally from Rye. She said that there were still 3,000 people outside who couldn’t get in the doors after 5:45 p.m.

“I love freedom and liberty and I’m trying to keep that in America,” Ms. Tucker said. “I’m really happy with how the economy is doing.

“I believe in the individual and he’s helping that,” she added. “The economy is booming and we see it. He is helping people.”

Mike Thibodeau, a 53-year-old retired machinist, carpenter, glass blower and warehouse worker from Hartford, Vt., was attending his first rally. “I voted Democrat almost all my life, until Trump,” he said. “Democrats have slowly slid farther and farther left. The left has gone so far left that they’ve lost their minds.’’

Mr. Thibodeau is not on board with all of Mr. Trump’s policies, but for him this is not crucial.

“You can’t get change if you keep electing the same people over and over,” he said. “That’s why I voted for him the first time, because he wasn’t a career politician. He’s never had any political power at any level and look at the job he’s doing.”

“He might be one of the two greatest presidents in my lifetime,” Mr. Thibodeau said, citing Ronald Reagan as the other.

In his speech, Mr. Trump referred to his impeachment acquittal. “The radical left’s partisan crusade has completely failed and completely backfired,” he said. “As we keep on winning, Washington Democrats are losing their minds.”

“I’m trying to figure out who is their weakest candidate,” Mr. Trump said. “They are all weak.”

“They don’t know what they’re doing,” he added. “They can’t even count their votes.”

As he left the stage, Mr. Trump held his hands up to every corner of the hockey arena, turning to applaud his supporters and pump his fists in their direction.

“We have so much more enthusiasm than them,” Mr. Trump said. “It’s not even close.”

Devi Lockwood (@devi_lockwood) is a fellow in the Times Opinion section.