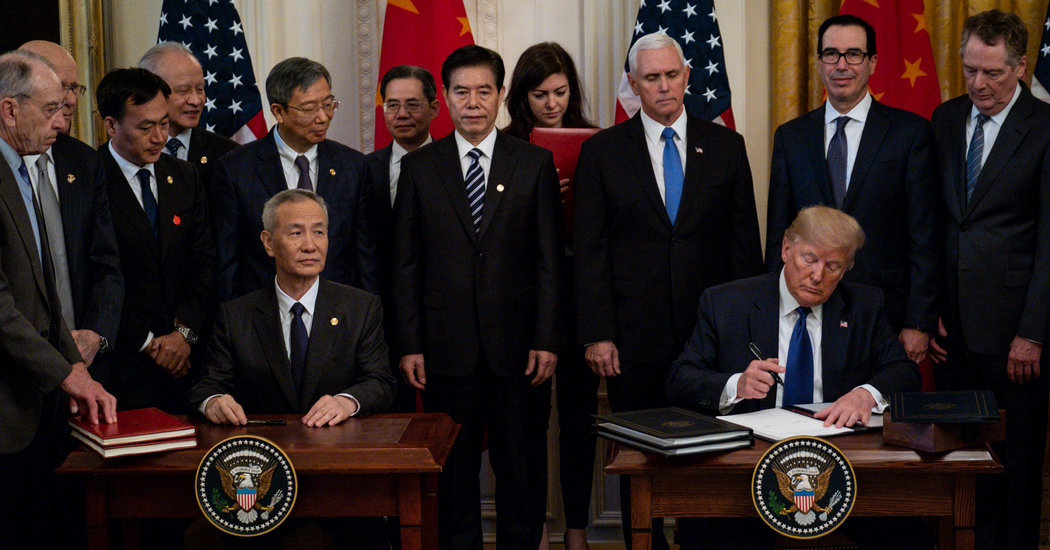 Perhaps the most valuable feature of the skeleton trade deal that the United States and China signed this week is simply that both sides have agreed to suspend tit-for-tat escalation. That alone is enough for people on both sides of the Pacific to breath a sigh of relief.

The bad news is that the deal doesn’t do much to address the longstanding problems in the economic relationship between the United States and one of its largest trading partners. Notably, it does not address China’s practice of subsidizing its state-owned enterprises.

The deal also leaves Mr. Trump’s tariffs on Chinese goods substantially intact. The average tariff on Chinese imports will stand at 19.3 percent, compared to 3 percent when Mr. Trump took office, according to Chad Bown of the Peterson Institute for International Economics.

A new analysis of data from 2018 and 2019 finds that Americans are paying the full cost of the tariffs.

President Trump is justified in describing these terms as something new. The United States historically has focused on negotiating the rules of international trade, and then allowing economic conditions to determine the volume. The Trump administration, by contrast, is primarily focused on increasing the volume of exports to China. It wrested from China an agreement to increase its total purchases from $186 billion in 2017 to $309 billion in 2021.

There’s no real precedent for that kind of rapid increase in trade with another country, and some analysts doubt that China even intends to fully meet the terms. The bigger issue, however, is that even if China comes through — even if America ships a lot more soybeans and natural gas, and sells more financial and technical services — the United States may not benefit.

The deal is structured to reduce the annual trade deficit between the two countries, allowing Mr. Trump to claim a political victory. Mr. Trump views trade as a competition between the United States and China, and he follows the balance of trade in much the same way that sports fans keep track of the score. But bilateral trade balances are economically insignificant. It doesn’t matter if a nation has a trade deficit with China if it has offsetting trade surpluses with other nations. And in this case, much of what China has agreed to buy from the United States would have been sold to other nations. Increasing exports to China doesn’t mean that the United States is increasing overall exports. The economic benefit may be quite small.

The commitments also end after two years. China is making no promises beyond 2021.

There are important downsides, too. The United States is essentially demanding that China shift trade away from other countries, some of which are American allies. The United States also has long pushed China to develop a more market-oriented economy. This deal, by contrast, encourages China’s government to orchestrate purchasing, likely with a heavy reliance on the very state-owned enterprises the United States has long sought to constrain. The short-term benefits could come at the expense of America’s longer-term interests.

The deal does include some changes in the rules of trade between the two countries. China agreed to facilitate imports of meat and biotechnology products, and the deal makes it easier for American financial services companies to operate in China. It also includes suitably stern language about the theft of American intellectual property, and a Chinese promise not to require American companies to share that property as a condition of market access.

But China has a long history of writing promises that look good on paper, only for foreign companies to discover they cannot depend on the regular enforcement of those commitments. The value of the new promises therefore rests on a new enforcement mechanism that allows either side to impose tariffs if it identifies a problem that is not promptly rectified. Will it work? One reason for doubt is that the Trump administration already is concerned that any further increase in tariffs would cause significant problems for the American economy.

Mr. Trump’s recent predecessors sought to wrest concessions from China without disrupting the flow of trade between the two countries. In part they argued that as China grew, it would increasingly see the benefits in following America’s rules: As a country produces more new products, it tends to become more interested in the defense of intellectual property rights. Under President Barack Obama, the United States also sought to place pressure on China by building a common front among other Pacific Rim nations, known as the Trans-Pacific Partnership.

Supporters of Mr. Trump’s confrontational style argue that those tactics did not work.

But Mr. Trump has yet to deliver better results. Administration officials emphasize that talks with China will move to a second phase, where the United States will seek to exchange tariff reductions for Chinese concessions on key issues, such as limits on industrial subsidies. But the Chinese, who struck this deal to avoid a painful escalation, may now see merit in putting off talks in the hopes of avoiding painful concessions. Next year, after all, may well bring a different American administration. Mr. Trump’s strategy may have run its course. And if this is all it produces, the United States is not in a better place than it was three years ago.