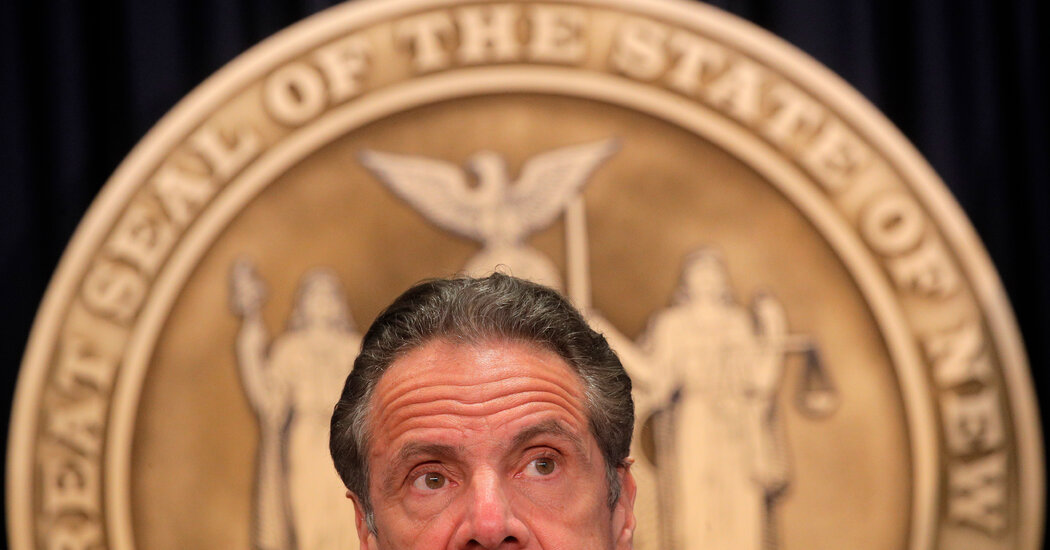 Andrew Cuomo has been governor for more than a decade, and lately he’s been raising money to run for a fourth term. Even if he had been living in a community of monks for all that time, this would be a terrible plan.

Really, you do not get better at this kind of office with long experience. You just get more and more former supporters who want you to go away so somebody else can have the job. Nobody should ever run for a fourth term. Nobody but F.D.R. should run a third time.

But now the question is whether Cuomo should even finish out his current term, which goes through next year. On the one side, you have a damning 165-page report by State Attorney General Letitia James confirming some old allegations about the governor’s grabbiness along with some shocking new ones. Fondling a state trooper’s stomach, grabbing an assistant’s buttocks during hugs, pressing his finger against the letters on a woman’s T-shirt at a political event.

Should he decamp, quick? Well, Cuomo lives in the governor’s mansion full time. Doesn’t appear to have any other house. If New Yorkers had been looking for signs that Andrew might not go quietly, there you have another one. A person under siege to vacate his official quarters will be much less responsive if he doesn’t have anywhere else to go.

His private life seems to be a little — wanting. He’s long divorced from Kerry Kennedy, the mother of his three daughters. His long-running girlfriend, Sandra Lee, left town two years ago.

He’s buried under these sexual harassment charges and nobody is defending him. Well, virtually nobody. Rudy Giuliani says driving Cuomo out of office would be “unjust, dangerous and entirely un-American.” People, do you think this is because:

A) Giuliani just wants to see Cuomo suffer through a long, painful impeachment.

B) Giuliani made the remark at a party after several tumblers of scotch.

Yeah, yeah, it’s A. Well, very possibly all three. But short of Rudy, Cuomo does seem to need all the help he can get. He’s been trying to defend himself by showing pictures where he’s kissing and hugging lots of people who seem perfectly happy with the attention. Of course, some are elderly fans who were standing in line waiting for it. Others, like, say, Al Gore, seem … not transported.

And then there’s the non-grabby Cuomo, who looks almost as bad in the James report. Some women said his “flirtatious behavior” was problematic, but still “a better alternative to the otherwise tense, stressful and ‘toxic’ experience in the Executive Chamber.” Don’t think it’s possible to defend yourself against charges of unwanted grabbing by proving your targets were even more traumatized when you screamed at them.

Despite some national exposure, Cuomo is basically a creature of Albany — one of those capitals that was chosen for being somewhere approaching the state’s geographic middle. It’s a somewhat isolated world most constituents seldom see. Plenty of parties for those who are interested. And what happens in (Name Your Capital) Stays in (Your Capital). In Albany, this is known as the Bear Mountain Compact.

For most of our history, these places have been populated by powerful men, less powerful men and a relatively small number of women, most with no public identity at all. In Albany, when the State Legislature couldn’t get some critical bill passed — a not rare situation — all the power would go to the “three men in a room.” The governor, the State Senate majority leader and the State Assembly speaker would get together and negotiate until the guys figured something out.

That was still basically the world Cuomo inherited when he became one of the three men in 2011. But it’s starting to change. Now, Andrea Stewart-Cousins is head of the State Senate. “Two men and a woman in a room” may not make a difference in every outcome, but it’s still a historic change.

(Like virtually everyone in Albany except the mice, Stewart-Cousins has been calling for Cuomo to step down: “Now that the investigation is complete and the allegations have been substantiated, it should be clear to everyone that he can no longer serve as governor.”)

Sexual harassment can happen almost anywhere, but to control it, it generally helps to have both genders in the power structure. State legislatures have always had exceptional trouble in part because the sexual balance of power is so askew.

Things have improved, but still, fewer than a third of the nation’s 7,383 state legislators are women. Only eight states have women governors. New York is one of the many that’s never had a female chief executive. If Cuomo quits or is removed from office, we’ll have one in Kathy Hochul, the lieutenant governor. Historically, that’s the job parties use to get a girl on the ticket. And to most New Yorkers, her duties seemed mainly to involve standing behind the governor and applauding supportively.

Although right now, not so much. Hochul, a former congresswoman, has moderated her assessment of Cuomo down to “repulsive & unlawful behavior” — which is certainly not what you’d call deferential.