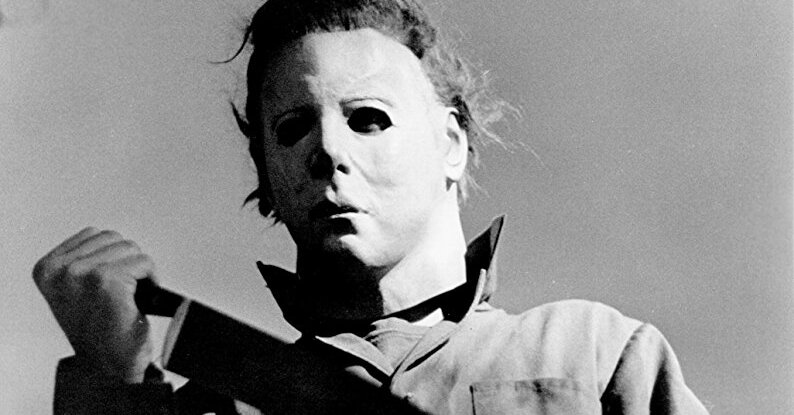 I don’t only watch horror movies; this year, I have made a conscious effort to watch as many movies from the big horror franchises as I can. I started with the “Nightmare on Elm Street” series (which I loved), I moved to the “Friday the 13th” series (which is fine), and I’m currently working my way through the “Halloween” series, whose primary antagonist is Michael Myers.

The “Halloween” movies, if you’ve never seen them, are pretty straightforward. In the first, directed by John Carpenter and produced by Debra Hill, Michael Myers is introduced as a young boy who has, inexplicably, killed his older sister. Fast forward to 1978, and the adult Myers has escaped from a sanitarium to terrorize his hometown and, specifically, a group of teenagers (including a young Jamie Lee Curtis as Laurie Strode) who live in Myers’s former neighborhood. Myers kills several teens before turning his attention to Strode, stalking her and the children she’s babysitting through their home, before he’s vanquished (although not killed) by his doctor, Sam Loomis, played by the always-wonderful Donald Pleasence.

Subsequent installments take the plot in different directions, but the films that involve Myers (the third movie is unrelated to the character or his mythology) share the same basic structure. There is a young woman (or young girl), a stable family, and an idyllic suburban neighborhood of white, middle-class people. The schools are safe, the police are decent and life is good for most people.

Myers, in this world, isn’t just a killer; he is an intrusion. His very presence destabilizes the existing social order. Each of his rampages makes clear that the manicured reality of suburbia provides no actual shelter or protection from the disorder of the world at large. Myers is practically unstoppable. He tears through the police with ease. In each of the Myers films, there is, somewhere, an avatar of traditional white American masculinity, usually a sheriff or another member of law enforcement. And each time, they are impotent in the face of Myers’s rage. In the fourth installment, a posse of local men gather with guns and trucks to try to confront and stop Myers. They are torn to pieces by a force that does not acknowledge their authority as “good guys with guns.”

In the same way that I watched the “Nightmare on Elm Street” movies as parables about the way the world is indifferent to children and their safety, I find that I am watching the “Halloween” movies as stories about the failure of white flight to actually assuage the fears of middle-class white Americans. Fear of crime, fear of violence, fear of some evil, lurking in the dark, with their children — and especially their daughters — in the cross hairs. It is not for nothing that the fictional town in which these films take place, Haddonfield, Ill., is a suburb of Chicago.

There are obviously other ways to read this series. As with the entire slasher genre, there are strong sexual overtones to the violence. Myers’s teenage victims are often with their partners when they are killed, and the women who survive — like Curtis’s character in the first two films or Ellie Cornell’s in the fourth — are the ones without sexual relationships.

But as I watch these movies, I am struck by this theme of fear and failure, and by the ways in which the world, as represented by Myers, makes a mockery of our pretense to safety, security and control.

My Tuesday column was inspired by my recent reread of large chunks of the sociologist Oliver Cromwell Cox’s book “Caste, Class, and Race: A Study in Social Dynamics.”

Over the course of 600 pages, Cox provides a systematic study of caste, class and race relations, underscoring the paramount differences between caste and race, and, most important, tying race to the class system. “Racial antagonism,” he writes in the prologue, “is part and parcel of this class struggle, because it developed within the capitalist system as one of its fundamental traits.”

My Friday column is a look at the Guarantee Clause of the Constitution, and how it might be used to fight democratic backsliding in the states.

The fight to fully realize American democracy will require a vision of the Constitution that emphasizes the ways in which it facilitates democratic practice, rather than one that sees only limits — a vision rooted in the hopes of freedmen rather than the fears of a moneyed elite. And it is to that end of democratic expansion that the Guarantee Clause holds a great deal of power and potential.

I joined the good folks at the Slate Culture Gabfest to talk about the new Marvel Studios movie, “The Eternals,” as well as the latest season of “Succession” and the controversy over critical race theory.

I also have a podcast of my own! It’s called “Unclear and Present Danger.” My friend John Ganz and I discuss the political and military thrillers of the 1990s, and try to place them in the context of the post-Cold War moment. Our first episode is on “The Hunt for Red October,” and our second episode is on “Patriot Games.” You should give it a listen!

William Hogeland on the fight over the 1619 Project in Slate magazine.

John Reeves on the Allen C. Guelzo biography of Robert E. Lee in the Los Angeles Review of Books.

Diana Palmer and Timothy Zick on the Second Amendment in The Atlantic.

Feedback If you’re enjoying what you’re reading, please consider recommending it to your friends. They can sign up here. If you want to share your thoughts on an item in this week’s newsletter or on the newsletter in general, please email me at [email protected]. You can follow me on Twitter (@jbouie) and Instagram.

Photo of the Week

I was in New York for a few days last month and spent a few hours wandering around Manhattan. Here’s a photo I took while walking through Chinatown. It’s not the strongest image I’ve ever taken, but I like the lines and symmetry.

For whatever reason, we’ve been eating a lot of cabbage lately, and this is now one of my favorite preparations. Cabbage cooked nearly an hour in a spiced tomato sauce, topped with dill and sour cream. It is incredible and can be served with any number of dishes, or even on its own. Recipe comes from Bon Appétit magazine.

Heat ¼ cup oil in a large cast-iron skillet over medium-high. Working in batches if needed, add cabbage to pan cut side down and season with salt. Cook, turning occasionally, until lightly charred, about 4 minutes per side. Transfer cabbage to a plate.

Pour remaining ¼ cup oil into skillet. Add spiced tomato paste and cook over medium heat, stirring frequently, until tomato paste begins to split and slightly darken, 2–3 minutes. Pour in enough water to come halfway up sides of pan (about 1½ cups), season with salt, and bring to a simmer. Nestle cabbage wedges back into skillet (they should have shrunk while browning; a bit of overlap is OK). Transfer cabbage to oven and bake, uncovered and turning wedges halfway through, until very tender, liquid is mostly evaporated, and cabbage is caramelized around the edges, 50 minutes to an hour.

Scatter dill over cabbage. Serve with sour cream alongside.