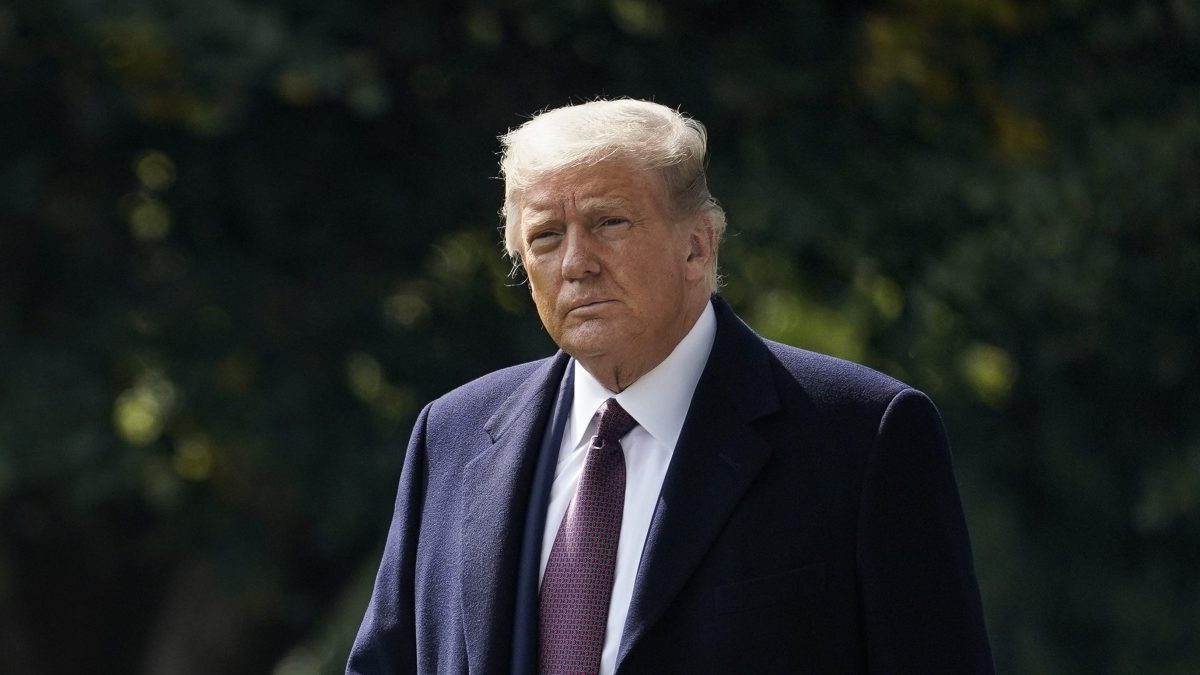 An election year already defined by a cascade of national crises descended further into chaos Friday, with President Donald Trump heading to a military hospital with the coronavirus after consistently playing down the threat.

With Trump in quarantine with what the White House described as mild symptoms, Democratic challenger Joe Biden pressed a bipartisan message in battleground Michigan after he and his wife tested negative.

“This cannot be a partisan moment. It must be an American moment. We have to come together as a nation,” Biden declared at a speech in Grand Rapids, warning that the virus “is not going away automatically.”

While Biden vowed to continue his cautious approach to campaigning during the pandemic, the president’s diagnosis injected even greater uncertainty into an election already plagued by crises that have exploded under Trump’s watch: the pandemic, devastating economic fallout and sweeping civil unrest. With millions of Americans already voting, the country on Friday entered uncharted territory that threatened to rattle global markets and political debates around the world.

The development focuses the campaign right where Biden has put his emphasis for months — and where Republicans don’t want it: on Trump’s uneven response to a pandemic that has killed more than 205,000 people in the U.S. And for the short term, it’s grounded Trump under quarantine in a hospital, denying him the large public rallies that fuel his campaign just a month before the election.

Biden and other Democratic officeholders focused largely on Trump’s health in public statements, although some could not help but admonish the Republican president, who openly ignored his own administration’s social safety recommendations for much of the year.

White House Chief of Staff Mark Meadows spoke with reporters about the condition of President Donald Trump, who tested positive for COVID-19.‹›

“Going into crowds unmasked and all the rest was sort of a brazen invitation for this to happen,” House Speaker Nancy Pelosi said on MSNBC.

The White House reported Friday evening that Trump will spend “a few days” at a military hospital; the president’s doctor reported that Trump was “fatigued” and had been injected with an experimental antibody drug combination still in clinical trials. His campaign announced Friday afternoon that all of Trump’s scheduled campaign events were being moved online or temporarily postponed. Trump’s family, a steady presence on the campaign trail, was also grounded.

Republican National Committee Chair Ronna McDaniel has tested positive for the virus as well. But Vice President Mike Pence, who has tested negative, will attend his campaign events as planned.

Other world leaders, including Britain’s Prime Minister Boris Johnson, have contracted the virus and made full recoveries. But strategists in both parties acknowledged the timing is bad.

Millions of Americans have already begun voting in several key states, and tens of millions more will receive absentee mail-in ballots or begin in-person early voting in the coming weeks.

Democratic presidential nominee Joe Biden and his wife Dr. Jill Biden have tested negative for the coronavirus. Biden was in close proximity to President Donald Trump at the presidential debate in Cleveland on Tuesday.

“Trump’s main advantages, including incumbency, have been removed. Rallies, his main vehicle for mobilizing his base, will no longer be possible. Fly-bys with Air Force One as a backdrop are gone,” said Republican strategist Rick Tyler, a frequent Trump critic.

He said that Trump’s infection also “fundamentally undercuts his entire campaign strategy, which was to ignore the pandemic and make unsubstantiated claims that we’ve turned the corner and are making an economic comeback.”

Biden, meanwhile, is not expected to alter his plans significantly.

The Democratic nominee has been much more cautious in his approach to campaign events and contact with voters than Trump. Having spent much of the spring and summer avoiding crowds, Biden has held far fewer public events since returning to the campaign trail last month — all of them with small crowds, if any, following social distancing guidelines. Only on Thursday did Biden’s campaign announce that it would resume door-to-door canvassing in addition to its phone and digital outreach to voters.

President Trump had a busy week of campaigning before his diagnosis with COVID-19. We took a look at the events he attended over the past week that may be at risk for virus spread.

Biden was traveling from Delaware to Michigan on Friday afternoon for a campaign event, while Jill Biden was attending a separate event in New Hampshire. Biden’s running mate, Kamala Harris, was making her previously scheduled trip to Las Vegas as well.

The campaign confirmed Biden, his wife and Harris all tested negative for the virus.

“I’m happy to report that Jill and I have tested negative for COVID,” Biden tweeted. “Thank you to everyone for your messages of concern. I hope this serves as a reminder: wear a mask, keep social distance, and wash your hands.”

Trump now faces tremendous pressure to adjust his rhetoric and campaign tactics after spending much of the year downplaying the severity of the virus and repeatedly declaring COVID-19 would “disappear.”

As recently as Tuesday, Trump ridiculed Biden on national television for his cautious approach.

President Donald Trump is expected to work from the presidential offices at Walter Reed Medical Center for the next few days after testing positive for COVID-19.

“I put a mask on when I think I need it,” Trump said. “I don’t wear masks like him. Every time you see him he’s got a mask. He could be speaking 200 feet away and he shows up with the biggest mask I’ve ever seen.”

Two additional debates are scheduled for Oct. 15 and Oct. 22. The Commission on Presidential Debates has not yet commented on any changes in the debate schedule or health protocols, but has confirmed that next week’s vice presidential debate is on as scheduled.

Trump and Biden are in high-risk categories for COVID-19 complications. Trump is 74 years old and clinically obese. Biden is 77 years old.

Should Trump emerge with no visible effects, he could declare a speedy recovery as proof that he’s been right about COVID-19 being overblown. But that still would be at odds both with established science and with what Trump himself has said privately. Recordings by journalist Bob Woodward captured Trump in early February detailing the “deadly” consequences of coronavirus, contrary to his public dismissiveness.

“From now until we get to the election, attention is going to be back where it should be: on COVID, the president’s response and the impact — and on health care,” said Democratic strategist Antjuan Seawright, a Biden supporter. “This proves our candidate was right all along.”