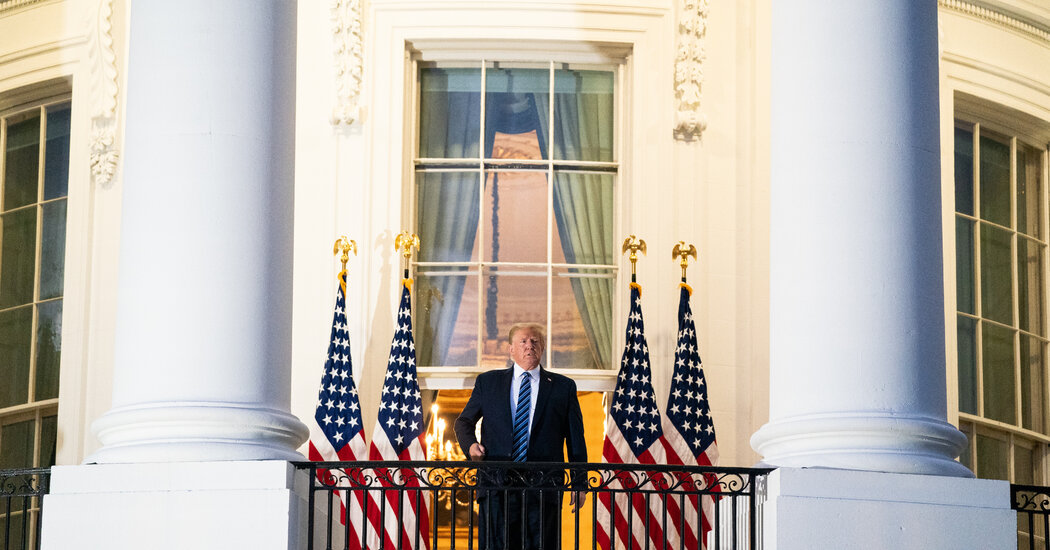 Donald Trump is a self-mythologized version of a man. It has never been a particularly hard act to see through.

When it came to Covid-19, his top concern did not seem to be the health of all Americans, or even his personal risk of infection. He was afraid of looking afraid.

So he didn’t wear a mask, mocked others who did and hosted large, unmasked gatherings without social distancing — including the reception for Judge Amy Coney Barrett, the Supreme Court nominee, which has turned the White House into what looks like the biggest coronavirus cluster in Washington.

On Monday, after Mr. Trump announced on Twitter that he was to be discharged that evening from Walter Reed National Military Medical Center — “Don’t be afraid of Covid,” he wrote — several of his prominent supporters celebrated it as an affirmation of his extreme strength and masculinity.

Kelly Loeffler, the junior senator from Georgia, posted a meme of Mr. Trump beside a wrestling ring, body-slamming a man whose face had been replaced with an image of the coronavirus.

That was particularly apt because Mr. Trump is a fan of World Wrestling Entertainment — the greatest spectacle of fake masculinity ever invented.

“He’s back. Yeah,” the overly cheerful-seeming White House physician, Dr. Sean P. Conley, said on Monday in the hours before the president was discharged. As supporting evidence, he said, “I think you’ve seen the videos, and now the tweets,” as if Mr. Trump’s ability to apply his thumbs to his cellphone were a sign of vigor.

It is barely worth noting the absurdity of any claim that Mr. Trump’s manly qualities allowed him to give Covid-19 the beat-down it so richly deserves. First of all, we don’t yet know the extent to which he has recovered, and even Dr. Conley acknowledges that the president is at least a week from being out of danger.

As a 74-year-old obese man, Mr. Trump is in the category of those most vulnerable to the coronavirus — part of the target audience, if you will, for its worst outcomes. (He is, however, white, and it is people of color who have experienced the brunt of the disease.)

If he has a better-than-average recovery, his access to care will be the most plausible explanation: the helicopter that airlifted him to Walter Reed; the dozen doctors dedicated to his case; the buffet of drug cocktails and cutting-edge therapies that may not have been given, in that combination, to any other American.

But that is not the story that Mr. Trump will tell or that his supporters want to hear. His most persistent theme from the beginning of his candidacy through the sunset of his first term is that America has gone soft and he is the cure for it. He’s the human incarnation of Viagra, applied to the body politic.

Mr. Trump has advised police officers to stop being so gentle with suspects and mocked concerns about concussions in football players: “Uh oh, got a little ding on the head.”

This worship of what he imagines is strength and masculinity, but what others see as brutality and stupidity, is all part of a piece. It is meant to reflect back on him. Strength knows strength.

At a rally not long before he got sick, Mr. Trump told a story about a construction worker who cried when they met — out of gratitude. Daniel Dale, a journalist at CNN who is regarded as one of the capital’s foremost fact checkers, pointed out that Mr. Trump had told nearly identical stories about a coal miner, a steelworker, a farmer and a man who looked as big as a “football player.”

Mr. Trump, of course, was not ever any of those things — not a construction worker, a coal miner, a steelworker or a farmer. He never served in the military, that symbol of male power, having evaded the draft during the Vietnam War with a doctor’s diagnosis of bone spurs in his heel.

But he has had a lifelong need to place himself in proximity to these archetypes, or above them. Mr. Trump told Howard Stern that while others his age fought in Southeast Asia, he was sleeping with so many women that he felt like “a great and very brave soldier” while having to avoid sexually transmitted diseases.

Mr. Trump’s battle against Covid-19 is different because, for once, he actually is the protagonist.

“Don’t let it dominate your life,” he tweeted about the virus, when announcing he was leaving the hospital. That he did not mention the more than 210,000 Americans who have died from Covid-19 was both grotesque and entirely unsurprising.

It is not hard to imagine that Mr. Trump regards those who have died as weak, or certainly as weaker than he is. The disease dominated them right out of existence.

This is the worldview of someone who said, of the former prisoner of war John McCain, “I like people who weren’t captured.”

As a campaign tactic, this is a risky pose. Mr. Trump’s quick and possibly premature exit from the hospital could lead to a new video production: a helicopter ride back to Walter Reed. His most devoted followers will surely love his bravado, but one of the big parts of the electorate he is struggling with — women — do not tend to go in for this sort of spectacle. They certainly do not equate illness with weakness.

But with Mr. Trump behind badly in the polls, this may be his last chance to catch up. He’s the cosseted son of privilege, finally in the midst of a fierce physical battle. It may be the last spectacular bout of this W.W.E. presidency: Man against dread disease.

Michael Sokolove is a contributing writer for The New York Times Magazine.