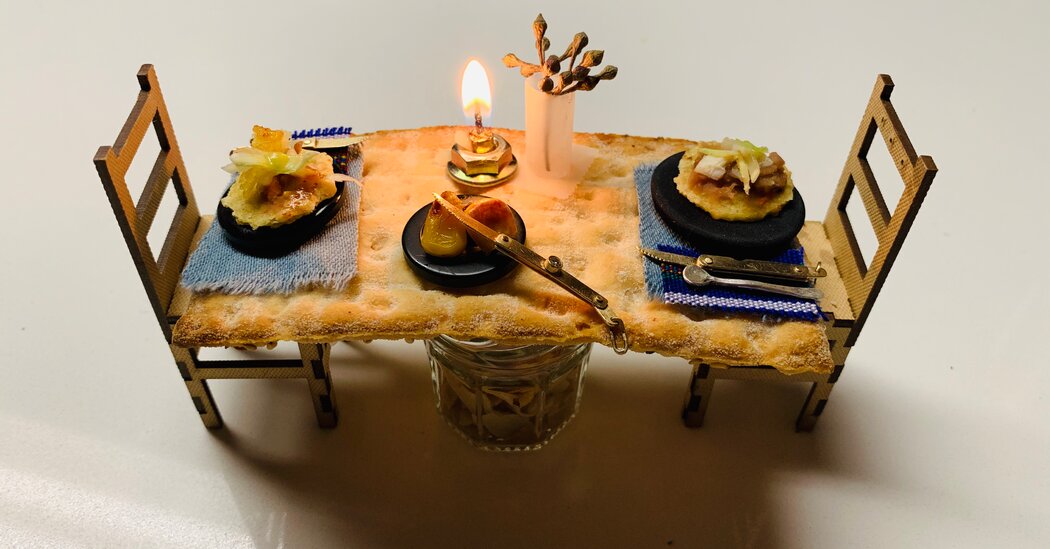 Making things — masks, quilts, ceramics, mandalas — was a practical and sometimes political response to the moment.

Necessity is the mother of invention, and at the start of the pandemic, the thing everyone needed was masks. To help keep people safe, an army of home sewers banded together last spring to make face coverings and other personal protective equipment for health care workers, family members and strangers.

Stuck at home without the diversions of socializing, travel or dining out, the crafting continued. Americans knitted, crocheted and wove through the lockdown. They made hand-tufted rugs, paper orchids, wooden chess sets, tiny shrines and botanical mandalas.

Sewing machines got hauled out of closets, dusted off and used to create, among other things, jackets out of vintage quilts, which spurred a fashion trend. And if the crafts themselves look modest and homespun, the money they are generating is not: A booming trade on Etsy more than doubled the company’s revenues to a record $1.7 billion in 2020, according to its financial reports.

Making things was a practical and even political response to the moment — seemingly an antidote to digital fatigue, but flourishing everywhere on social media, with colorful ceramics and Indigenous beadwork selling out on Instagram and crafters sharing “reverse-knitting” patterns on TikTok to make Harry Styles’s cardigan or Bernie Sanders’s inauguration-day mittens.

Many professional artists also had uninterrupted time in their studios this past year (admittedly a mixed blessing since so many income-generating craft shows, gallery exhibitions and teaching workshops were canceled). But it was ambitious amateurs turning their basements and sheds into art studios and trying their hand at pottery and ceramics that kept equipment makers like Skutt Kilns, the manufacturer of kilns and pottery wheels in Portland, Ore., in high demand.

For Carol Sauvion, the executive producer of the PBS documentary series “Craft in America,” the embrace of craft during a turbulent period was hardly surprising.

“Why is craft having a moment right now?” Ms. Sauvion said. “The basic reason is you can depend on it. You can learn from it. You can feel a comfort from it.”

Ms. Sauvion discovered making pots during another volatile period in history, as a young college graduate in the late 1960s, and became “just possessed by it,” she said, spending 14-hour days behind the wheel. That led to a decade-long career as an artist selling her work at craft shows and in galleries, and later, opening Freehand Gallery in Los Angeles.

Making things with your hands imparts a sense of control, real or imagined, when the world feels like it’s spinning apart, Ms. Sauvion said.

“No matter if there’s a pandemic and you haven’t left your house for a month, you can work on a quilt,” she said. “And you can get lost in that quilt. That’s so important for people. It gives them a sense of independence and a sense of security. I made this. And I solved the problems involved.”

Craft had experienced a renaissance even before the pandemic, in part because of its inclusive nature and the ways the internet has connected communities of makers and provided access to online instruction.

Increasingly, fine art galleries and museums have devoted shows to craft-based artists including Ruth Asawa, Faith Ringgold and Doyle Lane, while fashion magazines celebrated the Gee’s Bend quilters. It’s all part of an effort to diversify the art world through the addition of craft, “because that’s where women and people of color have traditionally been able to create,” said Glenn Adamson, a curator and the author of “Craft: An American History.”

But the pandemic has supercharged the popularity of craft — or maybe just reminded us of its emotional and practical necessity, not to mention deep roots, in American life. As Mr. Adamson writes in his book, the first 13 registered taxpayers of Allentown, Pa., in 1762, included two carpenters, two tailors, a smith and a wagon maker.

And the qualities that craft teaches — resourcefulness, resilience, flexibility — were much needed in a year filled with so much uncertainty and loss, and with the political and social turmoil of the election and the protests for racial justice after the murder of George Floyd.

Michele Tuegel, a paper artist and former arts administrator in St. Petersburg, Fla., was one American who took out her Sears Kenmore sewing machine for the first time in a decade — it was her high school graduation present in 1970 — and watched a couple of YouTube videos before getting to work.

At first, Ms. Tuegel said, she was responding to the need of a friend, a nurse who called in near tears saying her hospital had no P.P.E. But a year later, Ms. Tuegel is still at her dining room table, having so far made, by her precise count, 1,620 masks. She donates them to family members, friends, the workers at a local food bank, and sells them at an art gallery for charity.

For Kim Russo, who makes her living as a yarn dyer, the community she wanted to help was her own. With the lockdowns, she worried about the future of yarn stores, which depend on foot traffic. She also saw her personal income take a hit when the craft shows she usually traveled to throughout the year canceled in-person attendance.

Ms. Russo, 47, created a project to make limited-edition colorways, like “Clay Earth,” an earthy peach tonal with strikes of dark gray and green, or “Bloom Where You’re Planted,” a gentle gray that pays homage to a blooming meadow, making them available to buy each month only from select yarn stores.

It drives online business to the stores, and gives fiber artists something to look forward to. “There’s a sense of connection in the yarn community that’s very strong,” said Ms. Russo, who lives in northern Virginia. “We all want to do what we can to help. This is what I can do.”

For Ebitenyefa Baralaye, a Nigerian-American ceramist, sculptor and teacher at the College for Creative Studies in Detroit, the pandemic had a very personal, profound effect on his work. His father died from Covid-19 last April.

“As an artist, I’ve never had to process the death of a parent,” Mr. Baralaye, 36, said. “And as a teacher, I was trying to encourage my students to keep making. I was in this tornado, this whirlwind.”

Mr. Baralaye’s vessels and sculpture work had been largely abstract until now. But as a result of losing his father, who had encouraged him from childhood to become an artist, and after the protests and social unrest spurred by the killing of Mr. Floyd, he began to explore the lived experience of people of color in a more directly representational way. Inspired by American face jugs, the folk-art tradition created by enslaved potters in South Carolina, Mr. Baralaye is creating a series depicting Black portraiture.

“My relationship to making is pretty much consistent” to before the pandemic, he said. “But the meaning and motivation has been heavily affected.”

There was an embrace of craft — and a search of meaning through making — following other recent moments of national crisis. Remember the subway knitters in the months after the Sept. 11 attacks, head down, stitching as if in prayerful meditation? After the financial crisis of 2008, craft became associated with both thriftiness and political protest, or “craftivism.”

But in those moments, unlike the pandemic, “we weren’t shut down for a year,” said Cornelia Carey, the executive director of CERF+ The Artists Safety Net, a nonprofit focused on safeguarding artists’ livelihoods. “We weren’t forced to be self-sufficient. Self-entertaining, if you will.”

“To make something is such a powerful experience for someone. It is a meditation,” Ms. Carey added. “And then the internet gives you an opportunity to share it.”

That’s what Namita Gupta Wiggers has done on Instagram with the shirt she spent a year stitching. In March of last year, Mrs. Wiggers, a curator and writer and the founding director of the Master of Arts program at Warren Wilson College, outside Asheville, N.C., pulled out a simple white shirt and, following the advice of the artist Paul Klee, began taking a line for a walk.

She used a basic running stitch, in blue, and worked on the shirt as a way to process her emotions, observing no pattern. “In and out, up and down,” Mrs. Wiggers said. “There was something extremely grounding to sit down and work through something right in front of me.”

Months turned into a year. She decided she would stitch until she filled the shirt or the pandemic ended. Then, in January, her daughter, a schoolteacher, got her first vaccine shot, and Mrs. Wiggers had the idea to sew a Band-Aid in gold thread, with her daughter’s name and date of vaccination. As more of her family members were vaccinated, Mrs. Wiggers sewed Band-Aids for them, too, down the sleeves, on the collar, 20 in all.

Stitching the last one was “an incredible sense of relief,” Mrs. Wiggers said. “Closure isn’t the right word, but there is a sense of different possibilities. Things may get to the point where we may see each other soon.” (Already a pandemic artifact, the shirt will be on view at the Wing Luke Museum of the Asian Pacific American Experience through May 2022.)

Ms. Sauvion, the gallery owner behind the “Craft in America” series, recalled something that former President Jimmy Carter told her when she met him through the furniture designer Sam Maloof years ago, and has been thinking about again with the many setbacks of the pandemic.

“He told us that when he lost the election, he went home and he went down into his wood shop,” Ms. Sauvion said. “That’s what craft gives us. It grounds us again.”