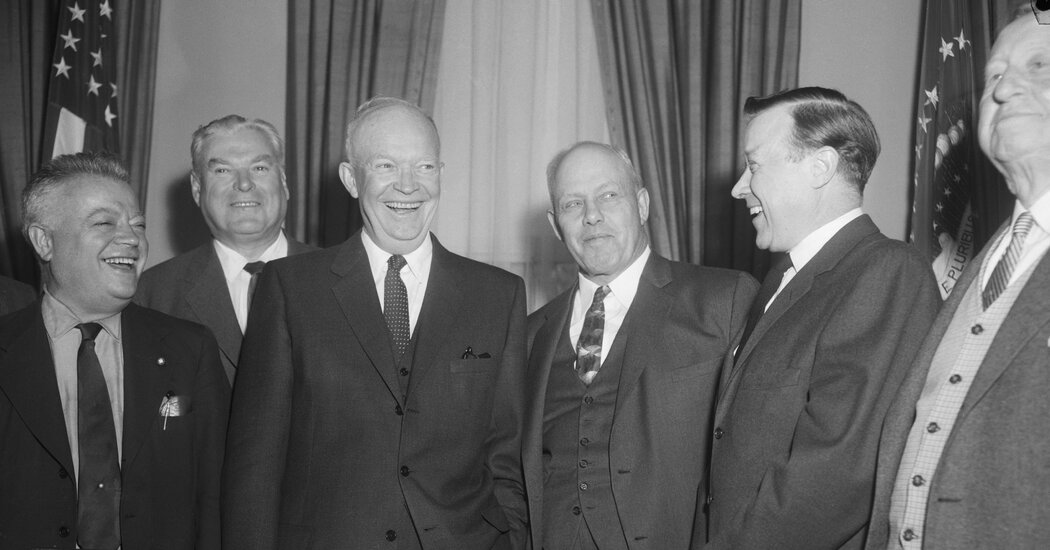 In September 1952, Dwight D. Eisenhower spoke to a convention of labor leaders and told them that before joining the Army, he took a job at a dairy plant where “I worked 84 hours a week on the night shift from 6 to 6, seven nights a week.” Recognizing how extreme that was, Eisenhower said, in a nod to labor, “In the years since, unions, cooperating with employers, have vastly improved the lot of working men and women.”

It is often forgotten that Eisenhower and many other Republicans used to support labor unions, if not always enthusiastically. In that speech, Eisenhower noted that the first federal law giving workers a right to organize and bargain came under a Republican, Calvin Coolidge — that was the Railway Labor Act, passed in 1926.

“Only a handful of unreconstructed reactionaries harbor the ugly thought of breaking unions,” Eisenhower told labor leaders that day. “Only a fool would try to deprive working men and women of the right to join the union of their choice.” In that era, Republicans often praised unions for fighting Communism and lifting living standards to help them make the case that American capitalism was delivering more to workers than Soviet communism was.

Richard Nixon also courted labor, inviting union leaders and their wives to a 1970 Labor Day dinner at the White House with a torchlight military pageant. Nixon tried to woo unions by signing the most significant pro-labor legislation since the 1930s, the Occupational Safety and Health Act of 1970. His Republican successor, Gerald Ford, also signed important pro-labor legislation, the Employee Retirement Income Security Act of 1974, which safeguarded pensions after the automaker Studebaker collapsed, leaving 4,100 of its workers with just 15 percent of their promised pensions.

It was Ronald Reagan, with his firing of 11,000 striking air traffic controllers, who sent the Republican Party’s relations with labor into a tailspin. Despite the party’s shift to the right under Reagan, there continued to be many pro-labor Republicans in Congress well into the 1990s, like Representatives Jack Quinn of New York and Bob Ney of Ohio. They often bucked party leaders, for instance, to support a higher minimum wage.

The decisive break came in 1996 when Speaker Newt Gingrich was struggling to retain control of the House. With Gingrich openly hostile to unions, the A.F.L.-C.I.O. endorsed Democrats over many longtime G.O.P. allies.

At the time, the A.F.L.-C.I.O.’s political director justified the move, saying, “Anybody who stands with Gingrich as often as they do is not standing with working people.” But the spurned Republicans said labor had turned its back on the G.O.P. That ended a 120-year stretch during which unions had always been able to maintain some level of bipartisan support.

As politics grew more polarized over the past quarter-century, the Republican Party, pushed by wealthy donors like the Koch brothers, grew more anti-union (and more opposed to regulations on business). In state after state, Republicans have moved to hobble unions, especially through right-to-work laws, enacted in recent years in Indiana, Kentucky, Michigan, West Virginia and Wisconsin. In 2011, Gov. Scott Walker of Wisconsin pushed through a law that crippled most of the state’s public-sector unions. And in 2017, after Republicans won control of Kentucky’s legislature for the first time since 1921, one of the very first laws they passed was a right-to-work law.

In recent decades, Republicans in Congress have opposed not just pro-union measures, but many pro-worker ones. They overwhelmingly oppose a higher minimum wage and proposals for employer-paid parental leave and sick days, castigating those ideas as big-government “employer mandates.”

Donald Trump, the presidential candidate, seemed like he might reverse course. In 2016, recognizing that Republicans had alienated unions and many workers, he campaigned as a champion of blue-collar workers. Many of them loved his promises to bring back jobs, but his administration, with its close ties to corporations and business lobbyists, has been vigorously anti-union and often anti-worker (except on trade, where Trump has delivered far less than he says).

Trump invited construction union leaders to the White House, but he utterly failed on delivering what they wanted most: his promised $1 trillion infrastructure plan that would have created hundreds of thousands of construction jobs. Infuriating union leaders and many workers, the Trump administration has refused to adopt any regulations requiring employers to take specific steps to protect workers against Covid-19. Many labor experts say the Trump National Labor Relations Board has taken myriad steps to make it harder to unionize. Mr. Trump has tweeted out attacks against the A.F.L.-C.I.O.’s president and several union presidents.

That one of the nation’s two major political parties has aligned itself so strongly against unions has contributed to two troubling trends: wage stagnation and increased income inequality. (Nor have the Democrats done nearly enough to address those problems.)

It is promising that Republican senators like Marco Rubio and Josh Hawley say their party needs to broaden beyond its largely white base by doing more to help workers. Thus far their proposals have made little headway, and their party remains anti-union and unsympathetic to workers — whether on raising the minimum wage, extending the $600 jobless supplement or tilting tax cuts toward the rich.

Mr. Trump and many Republican lawmakers would be in a much stronger position politically if they had truly done more to help workers and align themselves with unions. Most Republican voters support a higher minimum wage — referendums in red states like Missouri and Nebraska approved a higher minimum — but Republican lawmakers generally oppose such a move. With the success of the #RedforEd teacher strikes and a new Gallup poll showing strong public approval of unions, it would be smart for Republicans to show some real support for labor — if only for their own future electoral success.

Steven Greenhouse was a New York Times reporter for 31 years, including 19 years as its labor and workplace reporter. He is the author of “Beaten Down, Worked Up: The Past, Present, and Future of American Labor.”