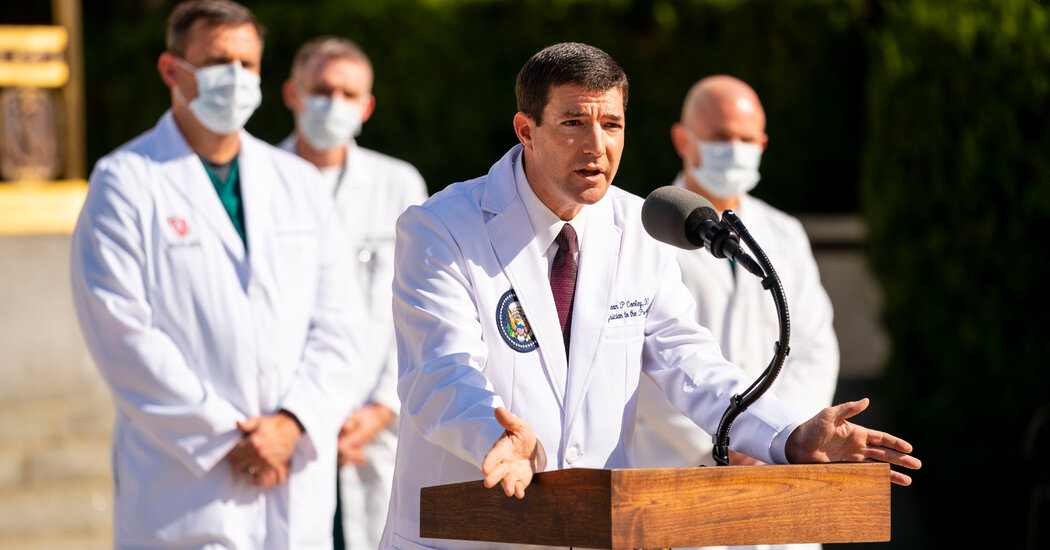 WASHINGTON — President Trump’s excursion around Walter Reed National Military Medical Center on Sunday evening, his repeated requests to be discharged and his aggressive denial of the seriousness of the coronavirus underscore the highly unusual and precarious problem presented to his doctor: His patient is also his boss.

In the case of Dr. Sean P. Conley, the White House physician and Navy doctor, the patient is both the boss and the commander in chief. Disobeying Mr. Trump’s wishes could be seen as tantamount to insubordination, among the military’s highest offenses.

Mr. Trump, like many presidents, chose a military doctor, long considered the most convenient and most trusted steward of presidential health and closely guarded medical information.

Dr. Conley, who served as an emergency doctor in the U.S. Navy as a lieutenant commander, said on Monday that while the president was “not out of the woods,” he agreed with Mr. Trump’s decision to leave the military’s health center in Bethesda, Md.

“The president has been a phenomenal patient during his stay here, and he’s been working hand in glove with us and the team,” Dr. Conley said at a news conference at Walter Reed, in which he said Mr. Trump would be departing.

“He has never once pushed us to do anything,” the doctor added.

Even though it is common for those who serve in the military to be treated by a medical professional of lower rank, only the president holds the title of top boss and, in the case of Walter Reed, technically has command over the entire medical center. Like other presidents, Mr. Trump appeared to pick a doctor who would maintain the narrative of his health status.

“Presidents make these decision based on politics over medicine,” said Matthew Algeo, the author of “The President Is a Sick Man” and other books about the presidency. “And there is an inherent conflict between politics and medicine.”

Mr. Algeo said the issue had so hampered the public’s right to know about a president’s condition that a commission should be established to re-evaluate how the occupant of the Oval Office receives care.

Mr. Trump is far from the first president to try to underplay a medical condition, and others have gone further. It’s just that Mr. Trump’s team has been particularly ham-handed with their clouding of his condition, Mr. Algeo said.

Abraham Lincoln was incubating smallpox when he delivered the Gettysburg Address, which his aides later played down. Woodrow Wilson had a stroke that was covered up for four months and greatly incapacitated him at the end of his second term. Grover Cleveland’s cancer surgery was hidden for nearly a quarter of a century. Franklin D. Roosevelt and his aides disguised his inability to walk unaided, the result of paralytic disease, as well as a host of serious ailments at the end of his life. Warren G. Harding had an undisclosed heart issue.

“My impression is that F.D.R. was probably in denial about how dire his condition was,” said Susan Dunn, a professor of humanities at ­Williams College and author of a book on the former president. “It was an election season for F.D.R., too, when his health worsened so dramatically. Perhaps Trump, like F.D.R., is also in denial about the seriousness of his illness.”

She said that Mr. Trump had “behaved irresponsibly and with willful ignorance about the gravity of the pandemic, a true public health crisis, and his insistence on leaving the hospital today only underscores his juvenile, self-interested behavior.”

Forms of modern media, in particular social media, make hiding any illness or deterioration much more difficult than in previous generations. So Mr. Trump’s doctor appears to have chosen another route, obfuscating details with vague timelines and imprecise language.

Mr. Algeo said, for instance, that brushing off Mr. Trump’s use of oxygen “reminds me of the Monty Python skit in which one of the knights who has one of his legs cut off and the other leg and then an arm says, ‘It’s only a scratch.’” (“’Tis but a scratch,” Python buffs will note.)

The net result of Mr. Trump’s hospitalization has been widespread confusion among those who may have been exposed by the president and others around him who have tested positive for the virus, and a general sense that his care is being coordinated less by medical professionals than the West Wing.

More unusual is Mr. Trump’s insistence on trying to resume normal activities when he has a highly contagious and notably volatile illness, one that is particularly dangerous to men his age and weight.

“Having an infectious illness itself is not a reason to keep someone in the hospital,” said Dr. Leana Wen, a former health commissioner for the city of Baltimore. “But if there is a suspicion that a patient will knowingly and purposefully endanger others, there would need to be a discussion had about keeping that patient in the hospital against his will.”

But most experts agreed that presidents have final say over their care in a way that most patients in and out of the military do not, and that those decisions end up reflecting on the doctors who speak about them in public.

“All of these decisions fall at the feet of the president ultimately, and that is putting hospitals and doctors in a bad position,” said David Lapan, a former official at the Homeland Security and Defense Departments and a retired Marine colonel. “When the doctors come out and say things in news conferences that are either seen as untrue or obfuscating, that reflects poorly on the doctor and the military.”