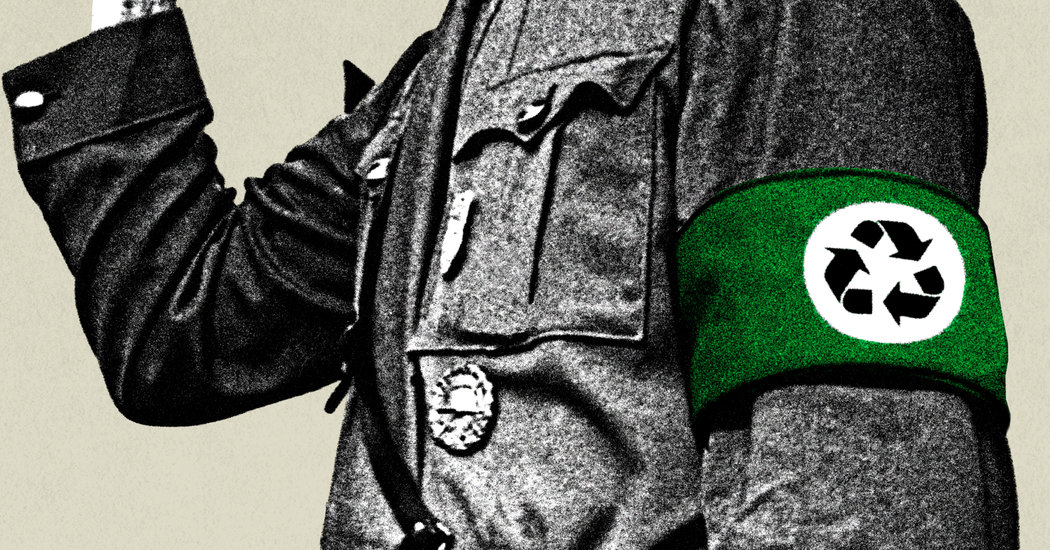 As an environmental journalist, I’ve been covering the frightening acceleration of climate change for more than a decade. As a person who believes in the tenets of liberal democracy, I’ve watched the rise of white-supremacist, anti-immigrant and nationalistic ideologies with similar dread over the past few years.

But I always thought of those two trends — looming ecological dangers and the gathering strength of the far right — as unrelated, parallel crises in a turbulent time. Only recently have I begun to understand that they are deeply interconnected, an ugly pairing of forces drawing power from each other.

From France to Washington to New Zealand, angry voices on the hard right — nationalists, populists and others beyond conventional conservatism — are picking up old environmental tropes and adapting them to a moment charged with fears for the future. In doing so, they are giving potent new framing to a set of issues more typically associated with the left. Often, they emphasize what they see as the deep ties between a nation’s land and its people to exclude those they believe do not belong. Some twist scientific terms such as “invasive species” — foreign plants or animals that spread unchecked in a new ecosystem — to target immigrants and racial and ethnic minorities. And here’s what really frightens me: This dynamic is likely to intensify as climate change creates new stresses that could pit nations and groups against one another.

Although the pressures of a warming planet are new, the deployment of environmental language for racist, nativist and nationalistic ends has a long, dark history. Before environmentalism became a mainstream and progressive cause in the 1970s, many American conservationists were also white supremacists, who argued that those they saw as outsiders threatened the nation’s landscape or lacked the values to care for it properly. Such thinking was common in Europe, too. The Nazis embraced notions of a symbiotic connection between the German homeland and its people.

And while mainstream environmentalists have long since renounced such beliefs, “the far right is still aware of this tradition,” according to Bernhard Forchtner, an associate professor at the University of Leicester in England.

The neo-Nazi group Northwest Front, which advocates expelling people of color from the Pacific Northwest, appropriated a flag designed by a left-wing activist, reframing it with the slogan “The sky is the blue, and the land is the green. The white is for the people in between.” In Slovakia, far-right activists invoking the centrality of forests to national identity accuse members of the Roma ethnic minority of damaging them with excessive firewood gathering, Balsa Lubarda, a Central European University doctoral candidate studying the radical right, told me.

Of course, many on the nationalist right deny the scientific consensus on climate change, so the ecological concerns they cite are more local. Others, though, accept the reality of global warming and view it “through the prism of white nationalism. And the solution then becomes the exclusion of immigrants, people of color, the so-called ‘Third World,’ ” said John Hultgren, a faculty member at Bennington College and author of “Border Walls Gone Green: Nature and Anti-immigrant Politics in America.”

President Trump tapped into this in December. Responding to a question about the climate during a visit to London, he added a point about pollution in the ocean. “Certain countries are dumping unlimited loads of things in it,” he said. “They tend to float toward the United States.” He did not specify particular countries, but the comment echoed plastic producers’ contention that much oceanic garbage comes from a handful of Asian nations that lack effective waste management. When I listened to Mr. Trump, I realized that what he said was freighted with something more than a corporate effort to pass the buck. He was casting plastic pollution as a threat that foreigners were visiting upon the United States.

This thinking has also reached the top of the agency that manages a tenth of America’s landmass. When William Perry Pendley, acting director of the federal Bureau of Land Management, was asked about the ecosystem risks of constructing a wall on the southern border, he responded by addressing not the impact of heavy equipment or a large physical barrier, but harm done by desperate people crossing the desert, often on foot. “We’re tunnel-focused, laser-focused on one issue: What is the impact of unfettered immigration across our borders on B.L.M. lands?” Mr. Pendley said. “Our obligation is to protect those lands, protect their quality, protect the vegetation, protect endangered species there.” He did not say what damage he believed migrants were causing.

The Fox News host Tucker Carlson has made similar arguments, falsely claiming in an interview with The Atlantic that the Potomac River has gotten dirtier “and that litter is left almost exclusively by immigrants.” The month before, he asked why environmentalists want to let refugees into the United States: “Isn’t crowding your country the fastest way to despoil it, to pollute it?”

It is not hard to see why such ideas are making a comeback. As the relentlessness of environmental calamity — epic fires and floods, escalating extinctions, warming oceans — becomes impossible to ignore, the right needs a way to talk about it. Nationalistic framings fit comfortably with a worldview many already hold. And for the so-called alt right, they offer the bonus of a cudgel for bashing establishment conservatives as beholden to globalist, corporate interests.

Some radicals are drawn to apocalyptic climate scenarios, seeing openings for authoritarianism or a complete societal breakdown. “They want to accelerate it,” said Blair Taylor, program director at the Institute for Social Ecology, a left-wing educational center, who has studied such groups. “So after the downfall they can set up their fascist ethno-states, they can be the Übermensch.” Violent actors are grabbing hold of such ideas. The killers accused of targeting Muslims and Mexican immigrants last year in New Zealand and Texas posted online manifestoes weaving white supremacy with environmental statements.

The Australian man who allegedly murdered 51 people at two Christchurch mosques called himself an “ethnonationalist eco-fascist” and wrote that “continued immigration into Europe is environmental warfare.” The suspect in the El Paso shooting that killed 22 — modern America’s deadliest attack targeting Latinos — ranted about plastic waste and overconsumption. “If we can get rid of enough people, then our way of life can become more sustainable,” he concluded.

If there’s one thing Americans have learned in the Trump era, it is that toxic ideas can move between the fringes and the political realm with stunning speed. Marine Le Pen, leader of France’s far-right National Rally — now the country’s main opposition party — has incorporated worries about the natural world into the party’s anti-immigrant, anti-Muslim ideology. She espouses an ideal of the French citizen as “someone rooted, someone who wants to live on their land and to pass it on to their children.” By contrast, she says, those who are “nomadic … do not care about the environment. They have no homeland.”

“Borders are the environment’s greatest ally,” said Jordan Bardella, the party spokesman and a member of the European Parliament. In Hungary, the far-right party Our Homeland accused Ukraine of poisoning Hungarians by dumping waste in the Tisa River. Extremist Polish groups hurl similar charges at Germany.

As climate change reshapes our world, we face a future filled with new pressures and constraints on resources, including arable land, food and water. Droughts, floods and storms are likely to push millions from their homes, some toward the relative safety and security of Europe, Australia and the United States.

The upsurge of anti-Asian discrimination that has followed in the wake of fears about the coronavirus offers a glimpse of the ugly sentiments such external pressures can unleash. Without giving it much thought, I used to accept the framing of environmental problems as shared concerns we would have to work together to solve. Now I can see there is another path too, one in which dark forces wield real dangers as weapons to tear us apart, and scarcity fuels conflict, brutality and racism. Our future in a hotter world of rising seas and more powerful storms already felt terrifying. Unless we come together — and fast — behind serious action to check the existential danger of climate change, it could be darker still.

Beth Gardiner is an environmental journalist and the author of “Choked: Life and Breath in the Age of Air Pollution.”