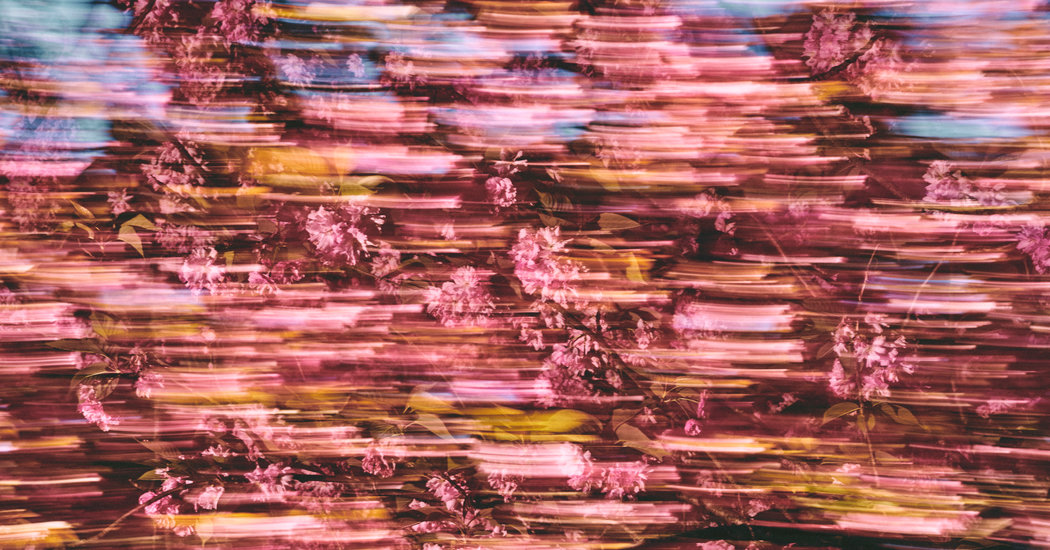 Absent any other marker, nature indicates the passage of time. Daffodils and hyacinths give way to roses. Blossoms fall, new leaves bud, pink petals are gone from empty New York streets. Frozen figures in rumpled clothes may note some slight change in the canvas. Who knows where the time goes?

We met in the warm season. We met in the cold season. It becomes possible to imagine time reordered in such a way. Oh, yes, in the warm season, I remember the peonies. A friend tells me her marker of time’s passage in Paris has become the advancing decomposition of a dead rat in the bike lane on her circumscribed daily outing. Who knows where the time goes?

We are all in a box. A smaller or larger Zoom box, depending on the number of people in the conversation. A sidewalk box that sets appropriate social distancing. The box behind the new plastic panels in stores, the box of four too-familiar walls, a mental box of insistent yet unanswerable questions; and in those boxes we are all grieving.

Grieving for a loved one lost to the coronavirus, for lost cities, for lost worlds, for America lost. The virus has revealed a nation in decomposition, incapable of coherence, un-led, angry, disoriented, scattered.

The pathogen itself becomes a political Rorschach test, perceived according to tribal allegiance. The vice president refuses to wear a mask on a visit to the Mayo Clinic, a wink to one of those tribes. Why the heck did the hospital break its own rules and let him in?

Because there are no rules anymore. Who would have thought it is possible to become nostalgic for alternate-side New York parking, that implacable marker of the days? Anything is possible; the proof is before our eyes.

Grieving is not missing. We miss conviviality. We grieve for life. For loves lost and retraced, for the precious moment unappreciated. Perhaps at root we grieve for the failure of our imaginations.

That is to say for our inability to grasp what W.G. Sebald, the German writer, called “the ghosts of repetition,” the ever-recurring patterns of dislocation and disaster that punctuate human history until they impose themselves on the present.

A middle-aged woman sits on the steps of a synagogue sobbing. A young woman props her bike against a fence and sobs. It seems indelicate to intrude on such grief. The loss of time itself can engender a terrible emptiness. I see the clock without hands, and the face without features, in the deserted streets of the shattering nightmare sequence in Ingmar Bergman’s “Wild Strawberries.” Who knows where the time goes?

Speaking of dreams, here is another one. A friend finds herself in a cumbersome crude contraption that looks like a beekeeper’s bonnet but is made of sheets of clear plastic screwed together with wood framing. She cannot figure out why it is there, until she learns that banks now require clients to box their faces in this way to get money from an A.T.M. Perhaps, in intimate circles, the box-bonnet bump will replace the elbow bump.

In our boxes, the great health-versus-wealth debate rages. How, when and where to restart the economy, the appropriateness of this or that trade-off. As if the great trade-offs that produced this dysfunctional America had not already happened.

The trade-offs that disempowered the body politic and democratic practice, and empowered special interests and the wealthy; that starved a health system that might have helped people survive better; that conferred sanctity on soaring executive compensation but not on a decent living wage for the mass of Americans; and on and on and on.

The pandemic is also an urgent call for national and personal reinvention and rebalancing. After the Black Death came the Renaissance. From the depths of economic horror came Roosevelt’s New Deal. From this horror, so far, come the senseless twists and turns of the orange Narcissus.

Bandits hold sway. I have visions of Howard Beale in “Network,” and his I’m-as-mad-as-hell-and-I’m-not-going-to-take-this-anymore that brought screaming Americans to their windows.

“All of humanity’s problems,” said Blaise Pascal, “stem from man’s inability to sit quietly in a room alone.” We are learning. Seeing frenetic consumption for what it was, shuddering at the frantic quest for distraction and status in the time before.

I have been listening to “Who Knows Where the Time Goes?” Fairport Convention, 1969, wonderful song, transporting. Turned time’s arrow backward for me, listening to Pink Floyd in Hyde Park in 1968. An ache, we all feel it now.

A cemetery may seem an unlikely source of solace, but Green-Wood Cemetery in Brooklyn, ranging over 478 acres, is a beautiful sanctuary. At the main entrance, a large colony of blue-green parrots has established itself. Urban legend has it the birds escaped from a transport at J.F.K. I watched them for a while swooping in mesmeric patterns with twigs in their mouths to add to a multistoried nest that appears to need no additions whatsoever. The parrots get on with their D.I.Y. anyway.

Stir, breathe, look around, do something. Who knows where the time goes? The birds know.