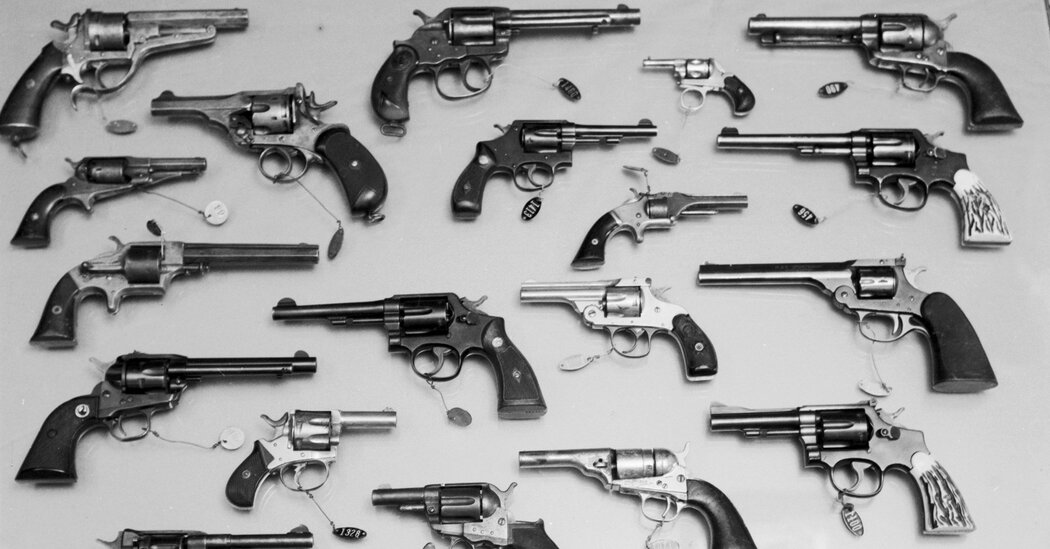 Back in the olden days — oh, children, it was a long time ago, when woolly mammoths and liberal Republicans roamed the earth. Anyhow, back in those days, when you’d hear about a terrible shooting, one of the most obvious, major details to fret over was where the killer got the gun.

These days, the answer is often: It’s a secret.

Here’s how this works. Perhaps you heard we had a shooting in Times Square last weekend.

The first question, of course, was about the three victims — one of them a little girl who was shopping for toys with her family. Authorities say they’re all going to survive, thank God.

The answer to our second natural question — what the hell happened? — is that the police believe a guy who peddled CDs in the neighborhood tried to mow down his brother, with whom he was having … a disagreement. In the great tradition of American gun violence, he was a terrible shot and instead hit two women and a 4-year-old.

Next, we’d want to know how that gunman got his weapon. New York City has very, very strict gun laws. Buying one requires a permit, and getting the permit involves a multistep process including application, fingerprints, waiting period, background check, interview.

It’s very possible he acquired the gun in a street deal, or borrowed it from a friend. But we’re not going to learn anything about who originally purchased it, or where. That’s because — bet you didn’t know this, people — it’s illegal for the authorities who track this stuff to let the public know.

Yes! This is thanks to the Tiahrt amendment, first passed in 2003, which prohibits the Bureau of Alcohol, Tobacco, Firearms and Explosives from sharing information with … almost anybody. It also limits the F.B.I.’s ability to hang onto gun background check data, requiring its quick destruction. All in all, the idea is to give gun dealers approximately as much right to privacy as cloistered nuns.

Todd Tiahrt, a former congressman from Kansas, has been out of office since his political career crashed in 2010 because of an unfortunate attempt to move up to the Senate. But his amendment lives on and on and on. As a result, it’s pretty much impossible for the public to know if there are one or two particular gun dealers in their town who’ve sold a whopping number of weapons that were later used in crimes.

“The A.T.F. has a tremendous amount of data,” said Josh Scharff, legal counsel for Brady, the gun-safety advocacy organization. Five percent of gun dealers, Scharff said, are responsible for selling 90 percent of the guns used in crimes.

A lot of these weapons come from the South, particularly Georgia and Florida. “I-95 is known as the iron pipeline.”

A gun dealer certainly can’t be responsible for knowing exactly where every gun he sells is going to wind up. But there can be some, um, telltale signs. Like all-cash transactions, or a single customer suddenly announcing he wants to buy five or 10 pistols of the same make and model.

Most dealers, Scharff noted, “won’t make that sale.” But some will, and it’d be very useful for all of us to know who — and where — they are.

But there’s still that bottom line, folks: Everything about gun laws on the federal level is the product of a Congress that’s deeply, deeply influenced by the gun lobby. So we have a pathetically underfinanced A.T.F. Along with laws like Protection of Lawful Commerce in Arms, which shields firearms manufacturers — and dealers — from being held liable when crimes are committed with their products.

And even the most modest gun laws require what optimists might call compromise. When you buy a gun from a legal dealer, he or she will have to report the sale right away. Most of the background checks — more than 90 percent — are finished almost instantly, and the F.B.I. has eight days to resolve the rest. Then it has to destroy the information it accumulated.

What’s left rests with the licensed dealers, who must maintain records for at least 20 years. The hitch is that, as you’ll remember, those are the same guys whose identities we aren’t allowed to know.

Good news: A handful of lawmakers have just introduced a bill to get rid of the Tiahrt rule. This proposal, helpfully called the Gun Records Restoration and Preservation Act, would allow the A.T.F. and the F.B.I. to share their gun-tracing data with local authorities, researchers and the public.

Bad news: The bill’s chances are approximately as good as Liz Cheney’s prospects of being nominated for vice president at the next Republican convention.

“It’s very uphill, to be blunt,” said Senator Richard Blumenthal of Connecticut, one of the co-sponsors. On the positive side, unlike most gun-safety proposals, this one could be tacked onto an appropriations bill, thus allowing it to pass with only 50 votes plus Kamala Harris.

“I think there is a path, but we would have to have our Democrats united,” Blumenthal concluded.