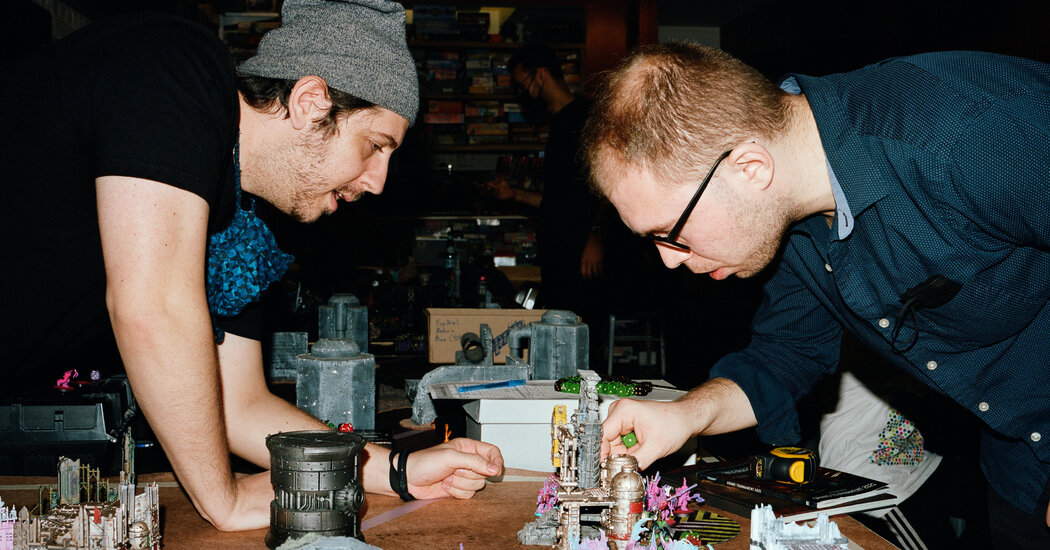 A tabletop game set in a dystopian universe has found a new legion of fans during the pandemic.

Looks like it’s time to break out the games again. Though, if you’re one of thousands of people around the world who play Warhammer, you probably never put it away in the first place.

Warhammer 40,000, a tabletop game set in a dystopian fictional universe, is not new. But a pandemic-fueled frenzy for science fiction and fantasy games like Dungeons & Dragons has introduced it to a whole new group of players.

Often referred to as Warhammer 40k, the game is played on tabletop terrains with models that players assemble, modify and paint. The game itself requires a lot of arithmetic, as well as a rule book, dice, measuring tape (to determine a character’s range of motion) and an optional laser (to ascertain a clear sightline to attack). The costs add up fast: Acquiring and readying enough new models for a proper game can run a player upward of $400.

But those costs don’t seem to be a deterrent.

Warhammer 40k is the most popular property made by its parent company, Games Workshop. Its popularity has helped the company’s stock price, which has risen by more than 60 percent in the last two years.

Celebrity players, including Ed Sheeran and Ansel Elgort, have drawn more attention to the game. Shayna Baszler, a WWE wrestler, has sported several costumes modeled on imagery from the Warhammer universe.

The actor Henry Cavill mentioned his hobby of assembling and painting Warhammer figures during a recent appearance on “The Graham Norton Show.”

“Can I come over and play?” asked Tom Holland, Mr. Cavill’s fellow superhero actor and guest on the show. “It sounds amazing.”

For longtime Warhammer players, the new embrace of the game has been a welcome surprise.

“Warhammer has always been this closet nerdy game that people just play with their weird toy soldiers and it’s like, ‘Why are adults doing this?’” said Nick Nanavati, 27, a professional Warhammer commentator who founded a coaching company for competitive Warhammer players called Art of War. “And it’s becoming more of this mainstream type of thing where nerd culture is becoming a lot more accepted by the public.”

Though the Warhammer universe is expansive and complex, it’s not necessary to understand all of its rules and lore to appreciate the game.

Ms. Guest, the daughter of Jamie Lee Curtis and Christopher Guest, is a longtime Warhammer fan. When she was in high school in Los Angeles, she and two classmates who called themselves “the nerd herd” led a successful campaign to throw a Warhammer-themed prom.

Warhammer’s first rule book was published by Games Workshop in 1987. But over the last several years, the world of the game has expanded significantly, as has its fan base.

“We’ve definitely grown a lot in the last six or seven years, and I think a lot if it is that we engaged our fan base,” said Andy Smillie, 37, the marketing and digital director for Games Workshop. Part of that effort was the creation of Warhammer Plus, a subscription service that offers “animations apps, shows and more” for $5.99 a mont

The game’s current popularity may have something to do with its dark themes, which feel well suited to these difficult times. There are no so-called good guys in the Warhammer 40k universe. The humans of Warhammer are mostly divided between the Imperium of Man — a fascistic cohort who serve a “god-emperor” that requires 1,000 human souls to be sacrificed to him daily — and their sworn enemies, the Forces of Chaos.

Most fans have a tongue-in-cheek or campy appreciation for the various factions within the game’s universe, which include Orks, Space Marines and a murderous division of human women called the Adepta Sororitas. But some Warhammer fans have forged more direct ties from the fictional realm of Warhammer to the actual politics of present-day earth.

In 2019, Fabrizio Galli, a sculptor, unveiled a gigantic puppet depicting President Donald J. Trump in the garb of the Imperium of Man’s god-emperor at a celebration in Italy. Mr. Galli referred to the puppet as a “joke.”

This fall, at a Warhammer 40k tournament in Spain, a competitor arrived wearing a sweatshirt emblazoned with conjoined swastikas and another symbol associated with hate groups. The incident, and the tournament’s decision to allow the player to remain at the tournament, created controversy in online Warhammer communities.

In response, Games Workshop issued a statement that condemned any fans’ affiliations with real-world hate groups. “The Imperium is Driven by Hate,” the statement’s headline read. “Warhammer Is Not.”

“I think there’s a difference between rooting for the Imperium of Man on a tabletop and rooting for their ideology in real life,” Mr. Smillie said. “And I think most people get that.”

Players interviewed for this article seemed to agree. “I think this hobby brings people together,” Ezekiel Lytle, 26, said at the Brooklyn Strategist, a shop where he teaches Warhammer and sells custom-painted Warhammer figurines.

Mr. Lytle cited Warhammer as an alternative to screen-heavy hobbies. Once a competitive video gamer, he returned to his childhood Warhammer hobby a few years ago. “Once I picked up Warhammer again, I never picked up my controller,” he said.

Travis Cheng, who was at the store for its brunch event, walked me through an abbreviated “skirmish.” He played as two space marines against my four members of the T’au, whom he referred to as “space communists.” The space communists technically won, but I can’t really take credit for it; Mr. Cheng was playing for both of us.