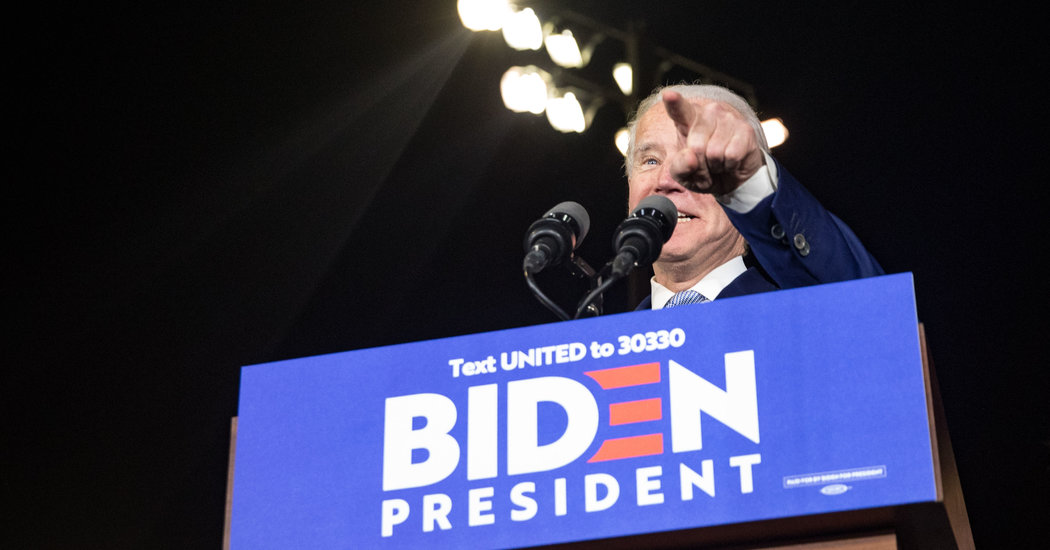 If you want to oust President Trump this fall and then achieve far-reaching changes such as universal health care, whom should you vote for?

Until last week, the answer for many was Bernie Sanders, the champion of a “political revolution” that includes Medicare for All. But increasingly there’s a sense that in practice the real “change candidate” may be Joe Biden — because he has a better chance of winning the presidency and helping to elect a Democratic Congress — and that’s why he was the big winner on Super Tuesday.

This was a triumph of pragmatism, an embrace by voters of a candidate they like rather than one they love, and that’s why Biden is now apparently the Democratic front-runner.

“I’m here to report that we are very much alive,” Biden announced after his Super Tuesday victories. Until South Carolina voters weighed in on Saturday, people were checking his campaign to see if rigor mortis was setting in.

Angry Bernie voters may protest furiously that it was the “establishment” that revived Biden to seize a prize that seemed theirs. But that’s wrong. Biden’s rescuers weren’t party elders but a marginalized constituency that is often taken for granted: Southern blacks.

It was black voters who gave Biden a huge win in South Carolina on Saturday, reviving his fortunes and clarifying his role as the alternative to Sanders. It obviously helped that Pete Buttigieg and Amy Klobuchar exited the race and, along with Beto O’Rourke, endorsed Biden in time for Super Tuesday (and Klobuchar may end up Biden’s running mate, while Buttigieg could end up in a Biden cabinet). But this wasn’t a coronation; it was a groundswell among moderates fearful that a Sanders nomination would be a Republican dream.

We in the pundit world are awful at predictions, and we should all be humbled by the conventional wisdom of 2016 that Trump was unelectable. Still, Sanders is the single most liberal member of the Senate, according to GovTrack, and old-timers remember what happened to Barry Goldwater on the right and George McGovern on the left. Democratic members of the House — who presumably know something about their own districts — say that it would be harder for them to win with Sanders at the top of the ticket.

At a dinner with a dozen Democratic House members recently, I was struck by how worried some were that a Sanders nomination would cost them any chance of a Democratic Senate and might even hand the House itself back to Republicans.

I’m closer to some of Sanders’s positions than to Biden’s, and I particularly admire Sanders’s leadership and authenticity on human rights issues like Yemen. But I don’t think Sanders would be able to accomplish his aims as president any more than he has been able to as a senator (he was a primary sponsor of only seven bills that became law, and they are mostly insignificant items, such as naming post offices or designating “Vermont Bicentennial Day”).

What the Democrats need to stage a revolution, or even a healthy evolution, is to win not only the presidency but also the House and the Senate. Democrats flipped the House in 2018 with moderate candidates running on a practical, limited agenda, while progressives running in swing districts did poorly, and that’s a lesson for 2020.

Winning the Senate for Democrats got tougher with Roy Moore’s defeat in the Republican primary in Alabama on Tuesday, for Moore would have made it easier for Senator Doug Jones, a Democrat, to be re-elected. The betting markets suggest that Republicans have a better chance of winning the House than the Democrats do the Senate.

Republicans sometimes seemed giddy about the prospect of a Sanders nomination. Trump’s tweets suggested that he was terrified of Biden and Mike Bloomberg, and it’s no accident that Republicans were calling for investigations into the Biden family rather than into allegations about the Sanders family and Burlington College.

In Arizona, when Senator Martha McSally tried to discredit her Democratic rival, Mark Kelly, her strategy was to release an ad accusing him of being a “Bernie Bro.” Being a “Biden Bro” conjures something less frightening.

Biden is plodding and uncharismatic, but he has solid working-class credentials and he’s also one of the most decent people in politics. His empathy is hard-won from the pain of the loss of two children. Samantha Power, the former ambassador to the United Nations, says Biden would give out his private cellphone number to strangers who had suffered great personal loss, saying: If you feel low and have no place to turn, call me.

I think the Democrats with Biden have a good chance of winning the presidency, holding the House and perhaps taking the Senate. An economic slowdown seems likely because of the coronavirus, which also highlights Trump’s administrative incompetence. And Republican rhetoric about Democrats as socialists — the theme of CPAC this year was “America vs. Socialism” — is laughable if Biden is on top of the ticket.

So while Biden’s proposals aren’t as soaring as Sanders’s, nor as comprehensive as I would like, they strike me as more achievable. In that sense, Biden may be the real candidate of change.