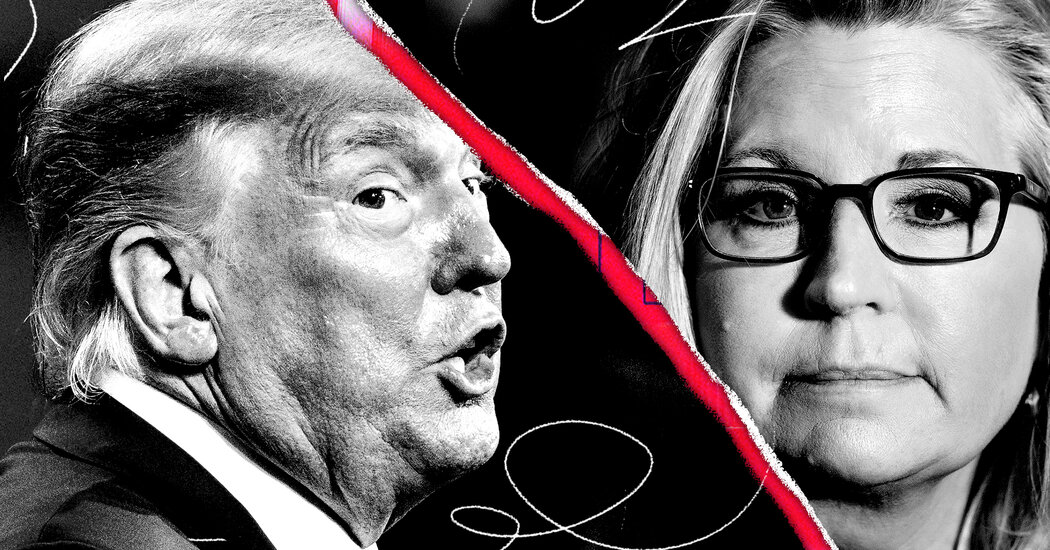 Are Republicans still the party of Donald Trump? For a moment in January, in the immediate aftermath of the attack on the Capitol, the question seemed if not exactly open, then perhaps slightly ajar.

A definitive answer arrived last week when the party voted to depose Liz Cheney of Wyoming, the third-most-powerful Republican in the House of Representatives — a punishment for her persistent and public rejection of Trump’s lie that the election was stolen from him. In her stead, the party installed a Trump loyalist, Elise Stefanik of New York.

“I would just say to my Republican colleagues: Can we move forward without President Trump? The answer is no,” Senator Lindsey Graham said on Fox News in the days leading up to the vote. “I’ve determined we can’t grow without him.”

But how can the party grow with a leader who led it to defeat? What does the electorate want, and how is it changing? Here’s what people are saying.

Trump lost. So why are Republicans standing by him?

Normally when a political party loses a presidential election, it engages in a period of reflection to understand what went wrong. In 2012, for example, Barack Obama’s re-election prompted a 100-page autopsy to explain Mitt Romney’s defeat.

But that hasn’t happened this time around. “The former president has not only managed to squelch any dissent within his party,” The Times’s Lisa Lerer wrote, “but has persuaded most of the G.O.P. to make a gigantic bet: that the surest way to regain power is to embrace his pugilistic style, racial divisiveness and beyond-the-pale conspiracy theories rather than to court the suburban swing voters who cost the party the White House and who might be looking for substantive policies on the pandemic, the economy and other issues.”

Why doesn’t the Republican Party feel the need to rebrand? There are a few theories, as Perry Bacon Jr. suggested at FiveThirtyEight. For one thing, Trump is still a force in the party: Anyone who discusses his shortcomings in the open risks provoking his ire and a primary challenge. For another, despite presiding over a pandemic-induced recession, the Republican Party almost won the White House in 2020: If Trump had done only about one percentage point better in Pennsylvania and Wisconsin and about three points better in Michigan, Joe Biden wouldn’t be president.

“Considering the G.O.P.’s decent showing last year, it makes sense that Republicans aren’t rethinking their party’s future,” Mr. Bacon wrote. “Change would be hard — because it would offend Trump and the party’s activists — and they may not need to make changes anyway.”

If the Republican Party wanted to put policy, rather than Mr. Trump, at the center of its opposition to the Biden administration and the G.O.P. campaign to reclaim control of Congress in 2022, what issues would it emphasize? “It’s the persistence of school closures, remote learning protocols, half-days, and ‘zoom in a room’ proctoring in defiance of everything we know to be reasonable protocols,” Noah Rothman argued in Commentary. “It’s the unjustifiably massive spending programs and giveaways to Democratic constituent groups under the guise of Covid relief.”

But as Mr. Rothman and many others have observed, the ethos of the Republican Party is increasingly defined not by the decades-long ideological commitments of its elites — supply-side economics, say, and reducing the size of the national debt — but by fealty to the former president and his reactionary style of owning the libs. (It doesn’t help that many progressive economic policies, like a $15 minimum hourly wage and raising taxes on the wealthy, are broadly popular among the electorate.)

Often what it looks like has nothing to do with public policy: A Morning Consult/Politico poll conducted in March found that Republican voters had heard more about the purported cancellation of Dr. Seuss, which the National Republican Congressional Committee used to fund-raise, than they had heard about the $1.9 trillion stimulus package that included $1,400 stimulus checks.

The diminishing salience within the party of conservative policy commitments is evident in Ms. Stefanik’s ascent. In contrast to Ms. Cheney, a stalwart neoconservative who voted with Trump almost all of the time, Ms. Stefanik voted against Trump’s signature 2017 tax cuts and even boasted about supporting the investigation by the special counsel, Robert S. Mueller III, that led to Mr. Trump’s impeachment. But in the years since, Ms. Stefanik took pains to ally herself with Mr. Trump, most recently by amplifying his lie of a stolen election and endorsing a ballot audit in Arizona.

“A Republican can excel even if she doesn’t have a particularly robust track record on Republican policy because, speaking frankly, that’s not a critical component of the party’s power in an era where they’re in the minority and in thrall to Trump,” Philip Bump wrote in The Washington Post.

For years, but especially since Mr. Biden’s victory, the transformation of the Republican Party into what Ms. Cheney called an “anti-democratic Trump cult of personality” has fueled predictions of its imminent collapse. But there are more than a few reasons to think Trumpism could once again carry the party to victory and remain in power for a long time.

A realignment in the electorate: Even as the G.O.P.’s politics of racial grievance became more overt under Mr. Trump — it was birtherism that catapulted his political career, as the Times columnist Jamelle Bouie reminded readers in January — the American electorate has become less polarized around racial lines. At the same time, it has become more polarized by educational attainment. According to David Shor, the head of data science at OpenLabs, support for Democrats increased from 2016 by seven percentage points among white college graduates in the 2020 election but fell by one to two points among African-Americans, roughly five points among Asian-Americans and by eight to nine points among Hispanic Americans.

Institutional advantage: Nonwhite and Hispanic voters still vote overwhelmingly for Democrats, but even a small decline in their support may be enough for Republicans to retake control of the government. That’s in part because our representative institutions are tilted in favor of the G.O.P., enabling it to win control of the White House and Congress without winning a majority of votes and insulating the party from popular opinion. The Republican advantage is likely to become even more pronounced after the 2020 census is tabulated and congressional districts are redrawn.

The polluted information environment: According to a CNN poll released this month, 70 percent of Republicans still say Biden did not legitimately win the presidential election. As The Times’s Maggie Astor reported, the Republican Party’s embrace of Mr. Trump’s election lies has played a key role in the push to pass restrictive voting laws around the country. Lawmakers in at least 33 states have cited low public confidence in election integrity in their public comments as a justification for such bills, according to a tally by The New York Times, and in several states the bills have already been signed into law.

“It’s like a perpetual motion machine — you create the fear of fraud out of vapors and then cut down on people’s votes because of the fog you’ve created,” said Michael Waldman, the president of the Brennan Center for Justice at New York University. “Politicians, for partisan purposes, lied to supporters about widespread fraud. The supporters believe the lies, and then that belief creates this rationale for the politicians to say, ‘Well, I know it’s not really true, but look how worried everybody is.’”

Unlike gerrymandering or congressional malapportionment, the decline in Republican trust in American elections is a problem with no simple legislative solution. “If enough people believe that a government is not elected legitimately, that’s a huge problem for democracy,” Keith A. Darden, a political science professor at American University in Washington, told The Times last year. “Once reality gets degraded, it’s really hard to get it back.”

“Democracy and Its Discontents” [Know Your Enemy podcast]

“Why the GOP Is Ideologically Lost” [New York]

“In Liz Cheney vs. Donald Trump, Guess Who Won” [The New York Times]