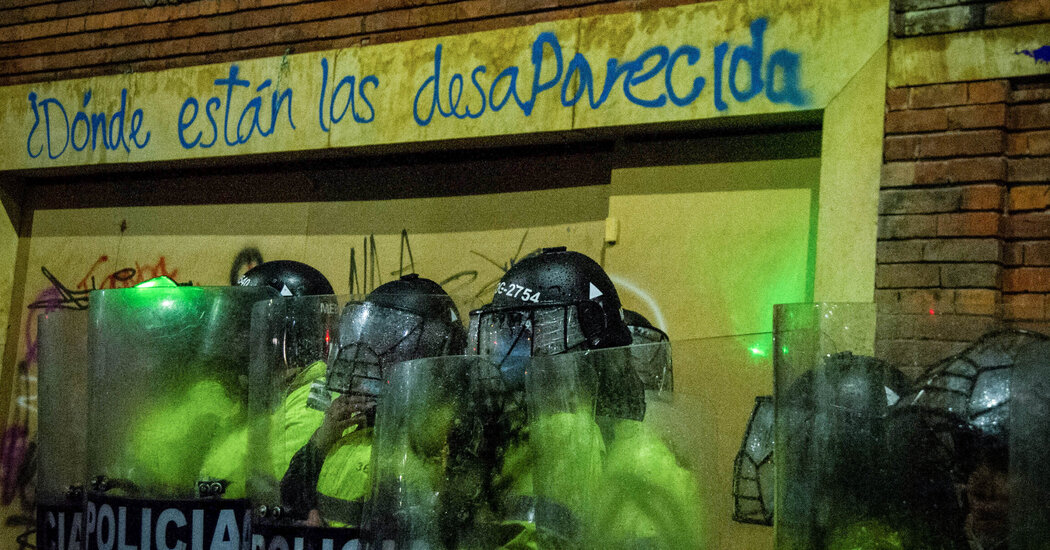 “I am tired, sad and content,” Diana Sofía Martínez told political leaders and international community representatives in Bogotá commemorating the fifth anniversary last month of the end of a conflict that marked Ms. Martínez’s life.

Her father, Edwin, an electrician, was kidnapped in 2002 by the Revolutionary Armed Forces of Colombia guerrilla group, known as FARC, which fought the government in a 52-year civil war. He remains missing.

“I am tired of all the bureaucracy and protocols,” she continued. “I’m sad because disappearances keep occurring. And I’m content because, despite so much adversity, we are still here dreaming and supported by infinite hope.”

Her moving words conveyed the hope of many Colombians when FARC agreed to turn over its arms to a United Nations mission five years ago. Her words also reflect the frustrations Colombians now face.

The agreement, reached after four years of painstaking talks, was supposed to address the conflict’s root causes: poverty, brutal inequalities in the countryside and the absence of government services. Its promise remains unfulfilled.

With over 80 percent of Colombians living in cities, where the middle class has grown larger and more removed from rural concerns, it was easy for many to think little of the armed conflict, fought in remote regions and terrorizing mainly smallholding farmers, many of them poor Black and Indigenous people. The accord never had broad popular support: Turnout was only 37 percent when it was put to a vote in 2016, and 50.2 percent voted against it. (Congress later approved a revised agreement.)

It’s not that Colombians don’t want peace. There are, though, serious differences between people’s needs in parts of the country where armed groups and illicit economies thrive and people’s needs in the parts where daily struggles — unemployment, common crime, corruption — are more typical of Latin American nations at peace.

Large landowners, oil and mining companies, and longstanding political machines had no interest in sharing power with small farmers and ethnic communities. The armed groups that supported them in the past and faced off against FARC continue to terrorize many municipalities. Meanwhile, large areas of the country remain ungoverned. Thousands have no land title, roads are scarce, and no authorities are present to protect people or settle disputes.

Some of the accord’s provisions have moved forward. About 13,000 ex-guerrillas have been integrated into civilian life and are engaging in the political system. A special tribunal and a truth commission are bringing some truth and justice to victims.

Key promises to address the conflict’s root causes, like a greater government presence in rural areas to support small farmers and provide alternatives to growing coca, have gone unmet. Small armed groups are proliferating and adding recruits. Social leaders have once again become targets. Homicides have increased to levels not seen since 2013 and in rural areas, massacres of civilians by armed and criminal groups to levels not seen in a decade.

President Iván Duque’s government has never provided sufficient funds for the rural provisions. Colombia’s comptroller general estimates that at the current rate of spending, it would take 26 years to fulfill the accord’s commitments. The accord’s core effort to bring the state into conflict zones has received barely a seventh of its expected 15-year budget, by the most generous estimate.

Disinvestment has obstructed plans to build roads, connect towns to the electrical grid, provide potable water, title land and carry out tens of thousands of projects.

Recent events have made it even less likely that the government will spend what it needs to. Lower prices for principal export commodities like oil, coal and coffee have crippled the national budget, which has been further squeezed by the need to care for the humanitarian needs of almost two million Venezuelan migrants and refugees, and the costs of dealing with Covid.

Can Colombia afford to abandon peace? Of course it cannot: It is horrifying even to contemplate returning to a conflict that claimed more than 260,000 lives, disappeared 80,000 people and displaced eight million from their homes.

There will be presidential elections in May. To accelerate application of the accords, the new president will need to overcome resistance from those unwilling to reduce their privilege. One way is to demand that the judicial system investigate ties between organized crime and landowners, machine politicians and factions of the security forces, prosecuting when necessary. The violent opposition to the accord’s reforms by these groups is a key reason Colombia is the most dangerous country in the world to be a human rights defender or environmental activist.

Spending would need to double, to nearly $3 billion per year, as foreseen in the government’s own 15-year investment plans. That would equal 0.5 percent to 1 percent of the gross domestic product, not a lot to ask of a middle-income country of 50 million people. It would not require any financial sacrifice from most Colombians: One of the planet’s least equal countries needs to increase taxes on the wealthy and on property holdings, and seize illegally obtained assets from politically powerful individuals whose activities straddle the legal and criminal spheres. Last, the country’s new leader will need to make clear to city dwellers, who have been less supportive of the accord, that they too will benefit from a countryside that is peaceful and well governed.

Colombia’s international friends, especially the United States, should provide greater financial assistance for rural development and give more support to find the killers of social leaders and ex-combatants, and hold them accountable. By removing FARC from its list of foreign terrorist organizations recently, the U.S. government signaled that it wanted reconciliation efforts to advance.

Colombia’s many victims need to be able to stop feeling “tired and sad.” They deserve the chance to have their hopes fulfilled.

Carolina Jiménez Sandoval is the president of the Washington Office on Latin America.