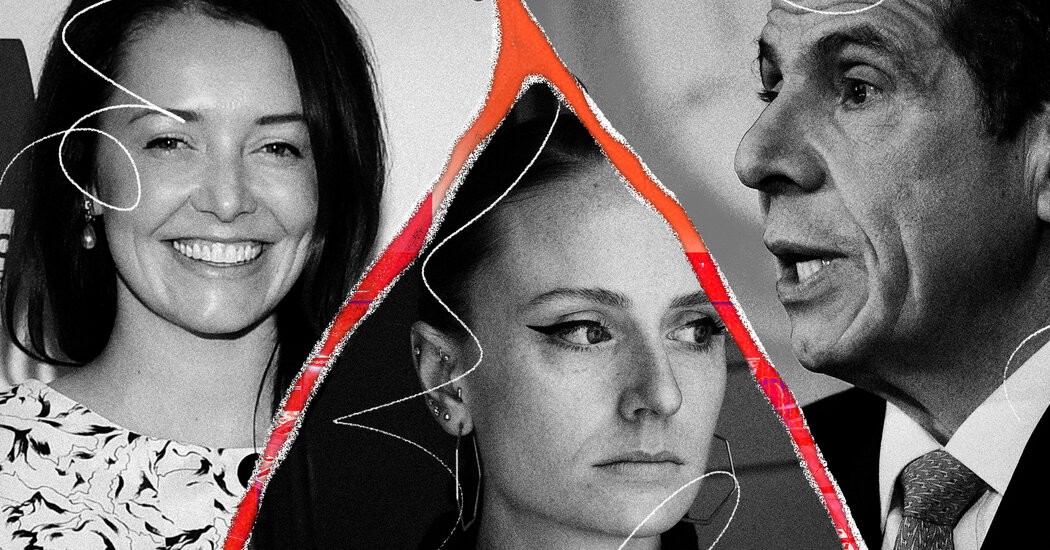 Top Democrats want him to resign. A lot of voters don’t.

Last week, Gov. Andrew Cuomo of New York faced a wave of calls for his resignation that began in the state legislature and crested with the support of some of the most powerful Democrats in Congress. “Due to the multiple, credible sexual harassment and misconduct allegations,” Senators Chuck Schumer and Kirsten Gillibrand said in a joint statement, “it is clear that Governor Cuomo has lost the confidence of his governing partners and the people of New York.”

But the people of New York may beg to differ: A poll released on Monday found that while the governor’s favorability rating had indeed plummeted, only 35 percent of New York voters say that he should resign, and 50 percent say he should not.

More than three years after the #MeToo movement started raising the nation’s consciousness about sexual harassment and assault, what explains the polarized reactions to the Cuomo allegations? Does the public opposition to his resignation reflect “the diminishing power of MeToo,” as the Times columnist Michelle Goldberg put it, or simply its evolution, as the writer Tanya Selvaratnam told The New Yorker? Here’s what people are saying.

The women who came forward

Seven women have made allegations against the governor, five of whom used to work for him. One woman has remained anonymous. Here are the six we know of:

The response: Mr. Cuomo has suggested that some of the claims are not credible, but has apologized for acting “in a way that made people feel uncomfortable.”

The question of the generation gap re-emerges

I’m old, which doesn’t make me tolerant of abuse of women, whether in the home or the workplace, far from it. But women my age distinguished — and I still do — between the Trumps, Kavanaughs, Weinsteins, Cosbys and the millions of males flirting or leering …. Until someone proves that Gov. Andrew Cuomo actually assaulted a woman or made sex the price of a hire, I see the cries for impeachment or resignation as ridiculous. — Emita Hill, former vice president of Lehman College, CUNY

Whenever debates about the #MeToo movement arise, the proverbial generation gap is never very far behind. Brian Lehrer suggested last week on WNYC, for example, that older men and women might feel that “the MeToo movement has usurped due process in too many cases, or that younger women today are too sensitive, or that a couple of unsolicited kisses are not worth destroying a whole, otherwise good man’s career over.”

This theory is backed by at least some evidence: In a poll conducted in 2018 by NPR, respondents over 35 were more likely to say that #MeToo had “gone too far,” that they would consider voting for a political candidate accused of sexual assault, and that they were less clear on what constitutes sexual misconduct.

The generational divide is also often an explicit premise of many a #MeToo-era apology. When President Biden in 2019 addressed allegations of inappropriate touching, for example, he said: “The boundaries of protecting personal space have been reset. I get it.” In Mr. Cuomo’s apology this month, he said: “I understand that sensitivities have changed and behavior has changed, and I get it. And I’m going to learn from it.”

But now, as at the beginning of the #MeToo movement, skeptics of the generation gap abound:

And in the case of Mr. Cuomo, the writer Moira Donegan argues that the image he has projected of an older, oblivious man who bumbled his away into harassing his staff doesn’t wash in light of the national reputation he meticulously constructed over the past year during his televised pandemic briefings as a hyper-competent executive.

When #MeToo is a labor issue

Unlike in some of the most high-profile #MeToo cases, the allegations against Cuomo largely concern not potential crimes but potential civil violations of labor law. Under the Civil Rights Act of 1964, workplace harassment — sexual or otherwise — is unlawful when it is “severe or pervasive enough” to create a work environment that “a reasonable person would consider intimidating, hostile, or abusive.” Under New York State law, the standard is lower.

Dozens of current and former employees told The Times that Mr. Cuomo’s office is indeed “chaotic, unprofessional and toxic.” This is especially true for young women, they said, but not exclusively: Two former male aides told The Washington Post that Mr. Cuomo routinely berated them with crude, anatomical language. If the New York attorney general, who is investigating the matter, verifies these allegations, the findings could lead to a civil suit.

But the confinement of such stories to the workplace may also be what makes them easier for constituents to tolerate. “Many older Democrats have what one calls ‘virtue exhaustion,’” the Times columnist Maureen Dowd writes. “Cuomo might be a jerk, many Democrats said, but at least he’s not a fascist.”

As one New Yorker wrote to The Times in a letter to the editor: “Whatever else Gov. Andrew Cuomo may or may not have ever done, no one can take away the sorely needed leadership role he took on at the start of the pandemic. At a terrifying time, when we New Yorkers were starved for guidance and no rational information was coming from the Trump administration, his was a soothing voice of reason.”

The sexual harassment allegations are not the only scandal bedeviling the governor. In January, New York’s attorney general released a report concluding that his administration had undercounted Covid-19 deaths in nursing homes by several thousand, leading the F.B.I. and a federal prosecutor to open an inquiry. When New York Assemblyman Ron Kim publicly criticized Mr. Cuomo about the matter, Kim says Mr. Cuomo called him and threatened to “destroy” him. The scandal intensified when The Times and The Wall Street Journal reported that the governor’s aides had altered the death counts well before Mr. Cuomo had previously acknowledged.

For many New Yorkers, this is the more objectionable scandal. While only 32 percent say they are not satisfied with the way Mr. Cuomo addressed the sexual assault allegations, 66 percent say they do not approve of the way his administration handled the nursing home data. “What matters here is moral prioritization,” Steve Cuozzo writes for The New York Post. “Progressives clearly consider crimes relating to life and death secondary to those involving sleazy come-ons.”

But to the journalist Rebecca Traister, the two scandals are really a single story about Mr. Cuomo’s abuse of power and mismanagement: “Through years of ruthless tactics, deployed both within his office and against anyone he perceived as an adversary, critic, or competitor for authority, Cuomo has fostered a culture that supported harassment, cruelty, and deception.” As one former staff member told her, “The same attitude that emboldens you to target a 25-year-old also emboldens you to scrub a nursing-home report.”

For Democrats, the memory of Al Franken’s resignation from the Senate in 2018 without an investigation may be playing a role in their opposition to Mr. Cuomo’s ouster. “Twitter is full of people demanding that the party not ‘Franken’ Cuomo, and pointing out that Republicans are taking no steps to investigate alleged sexual harassers in their own ranks, including the freshman congressman Madison Cawthorn,” Michelle Goldberg writes. “At a certain point, making sacrifices to demonstrate virtue, in the face of an opposition that has none, makes a lot of Democrats feel like suckers.”

The reluctance may also have as much to do with partisanship as it does with evolving norms around what due process ought to look like when claims of sexual misconduct are adjudicated in the court of public opinion. “I think we are evolving and evolving quickly as a country about how to respond to these issues but the truth is we haven’t had a national consensus,” Terri Poore, the policy director for the National Alliance to End Sexual Violence, told The Washington Post.

In the view of Dahlia Lithwick, a journalist at Slate, that evolution is a good thing. “To refuse to come to immediate irrevocable conclusions isn’t a repudiation of #MeToo so much as an acknowledgment that serious problems demand sober due process,” she writes. “That isn’t a failure of the left or a double standard. It’s an acknowledgment that facts matter, that they are discernible, and that doing so takes more patience than the blink of a news cycle allows.”

“We work in New York government. Sexual harassment in Albany is an open secret.” [USA Today]

“The Cult of the Thuggish Democratic Politician” [The New Republic]

“‘I didn’t realize’ may be Cuomo’s best defense, but it’s a weak and offensive one” [The Washington Post]

“Can Andrew Cuomo Continue to Lead?” [The New York Times]

Here’s what readers had to say about the last debate: Should Biden cancel student debt?

Matt: “I refinanced from 8 percent on my federal loans down to a 3.8 percent private consolidation loan because federal inaction on student loan rates was costing me hundreds monthly. Now I stand to lose out on up to $50,000 in forgiveness because I made a sound financial decision in the past. I’m a first generation college graduate and a person of color. Please don’t leave me behind.”

Jim: “Has no one suggested forgiving the interest on the loans and simply crediting all payments toward the principle, and then lowering future interest to zero or perhaps 2 percent to cover administrative costs? I am 59, still carrying $100,000 of debt for my now 32 and 29 year old children and have almost certainly repaid the principle, while leaving the total balance nearly unchanged. (And that of course is in addition to the $40,000 each of my children have been paying off for the last 10 and 8 years respectively). And while I realize this is a bit simplistic, if Goldman Sachs can borrow money from the Fed at 0 percent, why can’t I and my children?”

Todd: “I think that the ‘solution’ is to permit student debt to be cancelable in bankruptcy (just like credit card debt). Wealthy (or prospectively wealthy) borrowers are unlikely to tarnish their credit with a bankruptcy filing but those with real need will have no choice.”