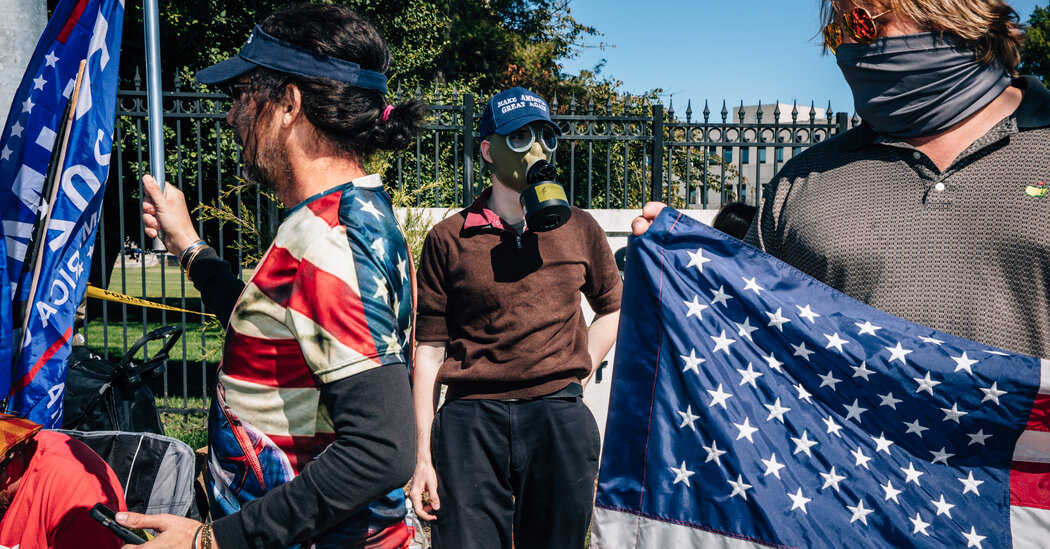 Back in the 1950s, the psychologist Leon Festinger came up with cognitive dissonance theory, which can essentially be described as the very human desire to reconcile the irreconcilable. Our brains, he realized, will go to baroque lengths — do magic tricks, even — to preserve the integrity of our worldview, even when the facts inconveniently club us over the head with a two-by-four.

Festinger’s most famous case study was of a cult that believed life on Earth would come to an end in a great flood around Christmas of 1954. The waters never came (obviously), but the leader had an explanation: She and her followers had warded off the apocalypse with the unflagging power of their faith.

Today, perhaps the best case study of cognitive dissonance theory can be found in the prime-time lineup on Fox News, where Donald Trump’s most dedicated supporters are struggling mightily to make sense of the president’s Covid-19 diagnosis. And just as Festinger’s work predicts, they are doubling down on their beliefs, interpreting recent events as incontrovertible proof that they were right from the start.

Laura Ingraham’s show on Friday night was a particularly captivating example of the figure-eight logic we resort to when our stories don’t align with reality. “The fact that it took him this long, frankly, to get a positive test,” she said of Trump, should be “reassuring to people. He’s met thousands and thousands of people over the last six months!”

For Ingraham, Trump’s contracting the disease was proof of how difficult it was to get, not how easy, particularly if you didn’t bother following the C.D.C. guidelines. Never mind that the president should, theoretically, be the person most insulated from the coronavirus in the nation. At the White House, he was tested daily. Anyone who visited him had to test negative in order to get near him. (The limits of that test, alas, have now been exposed.)

The problem was the president got reckless. He started holding large rallies again — at least one well-known attendee, Herman Cain, actually died. Trump had receptions inside and outside the White House, where wearing masks was not the custom. It was only a matter of time before he and aides fell ill.

But Ingraham still insisted that Trump’s story was proof that the coronavirus wasn’t especially contagious.

Later in her program, Ingraham even managed to find a doctor who challenged the efficacy of masks. Now, that’s impressive.

On his Friday show, Sean Hannity was reckoning with his own set of contradictions. He repeated, at almost metronomic intervals, that the president had been admitted to the hospital “out of an abundance of caution.” But in his outrage segment, during which he and his choir of the incensed (rightly) condemned those who wished the president harm, he didn’t blink when Geraldo Rivera said: “I hate when I hear that B.S. cliché ‘an abundance of caution.’ The headline here is that the president of the United States and the first lady of the United States have been diagnosed with Covid disease — a wicked, dangerous, deadly disease that’s already claimed 208,000 American lives.”

For Hannity, the president’s case wasn’t serious until it needed to be. Then it was serious. Deadly serious.

Everyone reckons with cognitive dissonance. Lord knows I have. I tuned out the ugliest charges made against Bill Clinton for years, as did loads of other feminists, most notably Gloria Steinem. “But he votes the right way,” we’d tell ourselves — just as evangelicals surely tell themselves that Trump supports their agenda on Roe, conveniently overlooking the 25-plus charges of sexual misconduct against him.

Not that these two men are equivalent in terms of their character. Who are we kidding.

But the point is: People will do a great deal to justify their belief systems, even if it means tolerating a thousand tiny inconsistencies. And Fox News is especially adept at giving people scripts they can use to minimize their discomfort with bothersome, disconfirming facts.

Even if they were to wake up one morning and realize that their thinking about this pandemic had involved some catastrophic errors in judgment, neither Sean Hannity nor Laura Ingraham seems like the type who’d acknowledge them publicly. It’s much more likely that they would quietly consign them to a memory hole. Conceding mistakes requires intellectual humility, which in both of these hosts is in demonstrably short supply; and anyway, what they peddle is certainty, cocksurety of opinion. It’s their brand.

The real question is whether their viewers will change their minds after watching the president struggle with the coronavirus. It was notable, I thought, that a few of Trump’s supporters were wearing masks outside Walter Reed National Military Medical Center.

But I don’t feel much hope. It requires a pretty thick hide to say you disagree with your former self (which may partly account for people’s fascination with the Lincoln Project). People tend to do so only when they feel that it’s safe — when they can be reasonably assured that the reception will be one of generosity and not a slightly more articulate version of nah-nah-nee-boo-boo.

We are at a moment of peak nah-nah-nee-boo-boo. Even under the best of circumstances, we humans love nothing more than to say, “Told you so.” As Kathryn Schulz writes in “Being Wrong: Adventures in the Margin of Error,” it’s basically a way of saying, “Not only was I right, I was also right about being right.”

But it is also through recognizing our errors, Schulz points out, that we learn, change and grow. A simple message, yes, but an impossibly urgent one right now. For those who’ve dismissed or downplayed the threat of the coronavirus, now is a good time to reconsider that position. And for those who’ve prayed for such a conversion, now is a good time simply to be thankful, and not to judge.