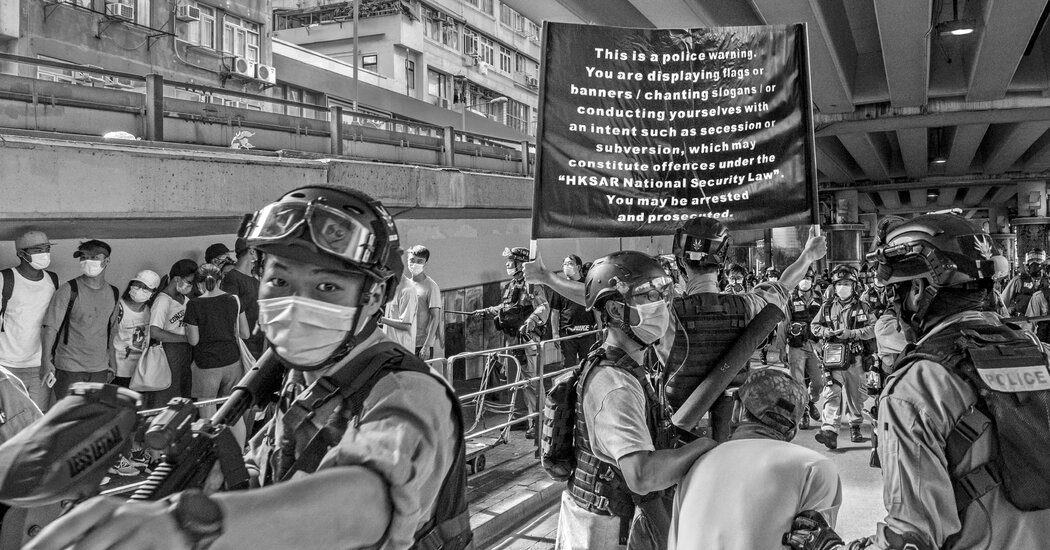 WASHINGTON —  On Thursday, July 30, I fell asleep watching reruns of “Law and Order.” The next morning, I woke up a fugitive.

I was one of the six. The charges? “Inciting secession” and “colluding with foreign powers” — part of the National Security Law imposed on July 1 by the Chinese Communist Party. Both crimes are punishable by up to life in prison.

It doesn’t matter that I’ve been an American citizen for 25 years — having left Hong Kong in 1990 to live in the United States.

I had violated Article 38 of the new law, which states: “This Law shall apply to offenses under this Law committed against the Hong Kong Special Administrative Region from outside the Region by a person who is not a permanent resident of the Region.”

In other words, every provision of this law — which was concocted in Beijing and enacted without the Hong Kong legislature — applies to everyone outside of Hong Kong. Nobody is beyond the law’s reach, not me in the United States, and certainly not the estimated 85,000 Americans living and working in Hong Kong itself.

My surprising new status as an international fugitive illustrates the imminent threat to free expression that pro-democracy activists have consistently warned about over the past year.

In 1984, when Britain agreed to cede its control of Hong Kong, and in 1997, when that promise was kept, China’s government solemnly promised the world that a policy of “one country, two systems” would be applied to Hong Kong for 50 years, with the people of Hong Kong governing themselves with a “high degree of autonomy.” Now the government of China’s president, Xi Jinping, has totally upended that agreement.

As this assault on basic freedoms in Hong Kong unfolded, many activists for democracy in that community like myself, and an uncountable many other Americans, have watched from afar — and have shown solidarity through our smartphones and Twitter. But now, as my experience shows, you don’t have to be in Hong Kong to get yourself in trouble. Your next retweet could earn you a prison sentence.

Article 38, as presented to the world, can seem outlandish in its claim to have the right and capacity to reach across the globe and arrest critics anywhere.

Might Hong Kong agents be deployed on Capitol Hill to arrest members of Congress who voted last November for the Hong Kong Human Rights and Democracy Act? Could they arrest the American president and other officials who, in support of Hong Kong, imposed sanctions on the Chinese Communist Party for its encroachment and suppression there?

If Article 38 is read literally, that’s the threat. How ludicrous. But that doesn’t make the crackdown harmless.

For example, I fear that I can no longer travel to Hong Kong, or to any countries with active extradition treaties with the Hong Kong administrative government or with China, without risking arrest and extradition. I cannot speak to my elderly parents in Hong Kong without opening them to investigations and invasive searches by the police.

I won’t be the only person sought by China for punishment of some sort. And if I can be targeted, any citizen of any nation who speaks out for Hong Kong can be, too.

Some of us can recall John F. Kennedy’s “Ich bin ein Berliner” speech delivered in a divided Berlin in 1963, when he assured Germans and the rest of the world that the United States stood for their freedom. By proclaiming himself a Berliner, Kennedy cast West Berlin as the great testing ground of Western courage and will for self-government, the front line in the battle between the Communist East and the free West.

The threats in Hong Kong today are as real as those in West Berlin. The difference is that in our more globalized world, Beijing’s encroachments have been brought to America’s front door, to its businesses, its personal devices and its private spaces.

Beijing’s actions are already bringing a response from Washington. On Friday, the Trump administration imposed sanctions on Carrie Lam, Hong Kong’s chief executive, and 10 other senior officials who have supported Beijing’s new policy in Hong Kong. The next day, the Hong Kong government snapped back with a dismissal of the sanctions as a “blatant and barbaric interference in the internal affairs of the People’s Republic of China (PRC), using Hong Kong as a pawn in its ploy to create troubles in China-U. S. relationship out of self-serving interests of some U.S. politicians.”

Americans have watched the protests in Hong Kong from a distance and many have shared support — but the case of the warrants out for me and the other five democracy advocates has now made the threats of censorship, suppression and arrest real, and not just for Hong Kongers in Hong Kong. It raises the possibility that it could now ensnare any American.

Which makes all of us Hong Kongers now.

Samuel Chu is the founder and managing director of Hong Kong Democracy Council, an advocacy group based in Washington, D.C.