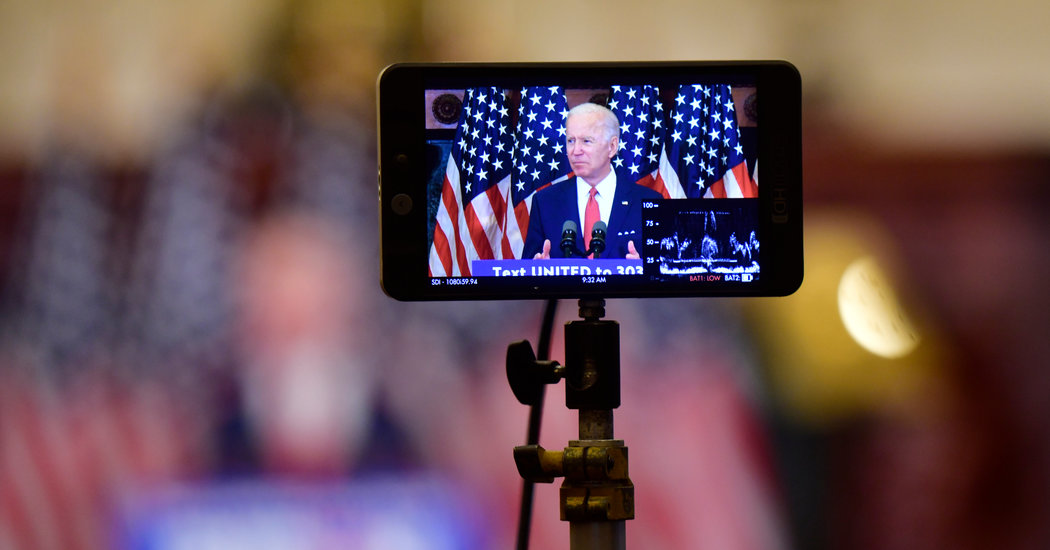 Joe Biden is the Democratic presidential nominee, and though the primary was, by historical standards, quite tepid, there is still a lot of work to be done on unifying the party. Many young Democrats are rightfully skeptical of Mr. Biden and his record on many issues that matter to them. But Mr. Biden’s team has at its disposal a number of concrete actions that would not just help to unite the party but also help it win persuadable voters. By embracing progressive ideas, Mr. Biden and his allies will be able to make a persuasive positive case for himself that will appeal to voters, as opposed to just focusing on anti-Trump messaging that isn’t as persuasive. Research, in fact, shows that most voters have fairly fixed views on Mr. Trump but can be persuaded about Mr. Biden.

These policies were all necessary before the pandemic, but the coronavirus has only made the case for them stronger, both to address the pandemic and to rebuild afterward. Americans cannot afford to stay home from work, because we have no paid leave policy and too often cannot afford to be at work, because we lack affordable child care. The progressive agenda already had more support than many realize, but the pandemic has added urgency and helped make voters comfortable with more ambitious policy positions. Passage of Senator Kirsten Gillibrand’s Family Act, for example, which would guarantee paid family leave, and Senator Elizabeth Warren’s proposal for high-quality, affordable child care would, especially if they became law together, increase affordability and foster resilience for American families.

At Data for Progress, we tested these policies in the most robust way we could. To begin, we informed voters that these were Democratic proposals, which cues the partisan instincts that will take over as the policies become law. We also tested four arguments for and against each, which voters were randomly assigned. Even after hearing these arguments, these paid-leave, pharmaceutical and climate policies had strong majority support. These are places where Mr. Biden can embrace the progressive agenda and win.

Americans have long been unable to afford prescription drugs, and support for reform transcends partisan lines. Mr. Biden has growing strength among older voters, which means that pointing out Mr. Trump’s fealty to big pharmaceutical companies can strengthen his hand. As voters’ minds focus on a coronavirus vaccine and potential treatments, Mr. Biden could embrace Bernie Sanders’s Innovation Prize Fund, which would help us develop vaccines quickly and make them accessible to all Americans and not monopolized by one company. The American Drug Manufacturing Act proposed by Senator Warren and Representative Jan Schakowsky of Illinois would allow the government to manufacture the coronavirus vaccine, as well as other drugs like insulin that have become unaffordable to millions of Americans. A proposal from Representative Lloyd Doggett of Texas to break the patents on high-cost drugs is one of the most popular policies we’ve ever tested and could be done on Day 1 by executive order.

Polling shows that after years of Mr. Trump’s climate change denial, Americans are also eager to see serious action on climate change, particularly if solutions create good-paying jobs and bring down the exorbitant monthly costs of housing and heating. Research I conducted with two political scientists, Brian Schaffner and Laurel Bliss, shows that climate is a top issue for persuadable voters, and recent research suggests that it could excite the young voters Mr. Biden has had trouble reaching. The Green New Deal for Public Housing, championed by Representative Alexandria Ocasio-Cortez of New York, would reduce the emissions that come from public housing while also reducing toxic pollutants that disproportionately affect people of color. It would also save taxpayers money on their electricity bills. And the climate standards set by Gov. Jay Inslee of Washington and Senator Warren would decarbonize our economy on the timeline that science demands.

Mr. Biden has made meaningful overtures to environmental justice groups who are calling for clean air and water, and he has committed to the idea that climate investments should be aimed at low-income communities that suffer the most from pollution and Covid-19. These policies, too, would create the framework for putting Americans back to work rebuilding a clean economy and have broad support with the American public.

Interestingly, they maintain majority support even after partisan framing, and they are also policies that have a credible chance of passing a Democratic Senate, making them effective policies not just for winning an election but producing a legacy. On these types of health and environmental reforms, voters trust Joe Biden over Donald Trump.

We have found that embracing a climate agenda will help Mr. Biden particularly with Sanders supporters and young voters. Commitments that focus on taking on powerful interests — like removing fossil fuel lobbyists from the Environmental Protection Agency — are the most effective arguments with those groups of voters.

It’s important to stop pretending that the progressive agenda is exclusively a mobilization agenda. In fact, progressive ideas have a powerful ability to persuade voters to vote for Democrats.

Civis Analytics has built a persuasion experiment to measure the impact of associating a Democratic candidate with a specific issue relative to a Republican. It shared with Data for Progress two climate policies it tested: working to protect the environment against climate change while expanding the clean-energy economy and preventing corporations from emitting toxic chemicals that kill Americans. While many progressive policies are actually quite popular, these two perform better than the average policy by a strong margin.

There are also areas where Mr. Biden can improve upon the legacy of the Obama administration, in which he played a key role.

First, the Affordable Care Act did not focus on direct government interventions that people could see in their daily lives and instead made private marketplaces the core of the law. Since passage, however, the public provisions in the act, like Medicaid expansion, have provided much of the most positive impact on society and on increasing turnout among voters. Powerful policy results can persuade and mobilize. Mr. Biden’s team should apply this lesson in championing government production of drugs, government investment in clean energy and public pre-K. A growing political science literature shows that public provision creates positive feedback loops as people see the benefits of government action.

Second, Mr. Obama could have been more demanding about personnel. He ran as an economic populist, but his first-term economic team included too many people with ties to corporate power, making it harder for him to take on these entrenched interests. There are a lot of ways that Mr. Biden could create a more progressive cabinet, and given the widespread destruction of agencies like the Environmental Protection Agency under Mr. Trump, he has his work cut out for him. When Mr. Biden thinks about a vice president, he should consider a woman who has the know-how, plans and staff to carry out this ambitious but achievable agenda, someone, in other words, like Senator Warren.

Last, the Obama White House was constrained by deficit cynicism from the right. When Mr. Biden takes office, the deficit will be quite high, in part because of the government’s response to the coronavirus emergency. But we will still need far more work to build an economy that actually improves the lives of working people. That means Democrats can’t allow Republicans to be deficit doves under President Trump and deficit hawks under President Biden. Voters overwhelmingly say that we should spend more in response to the coronavirus pandemic, even if it means increasing the national debt. There have been positive signs here: combining economic stimulus with clean energy jobs is something that Mr. Biden has experience with, and something voters would embrace.

Mr. Biden can combine these policies with the message that Mr. Trump has favored the rich while immiserating working people, using race and place of origin to divide and distract working people from his economic plunder. The Democratic Party is strongest when it reminds voters that it is the party of all working people, no exceptions.

Sean McElwee (@SeanMcElwee) is the executive director of Data for Progress.