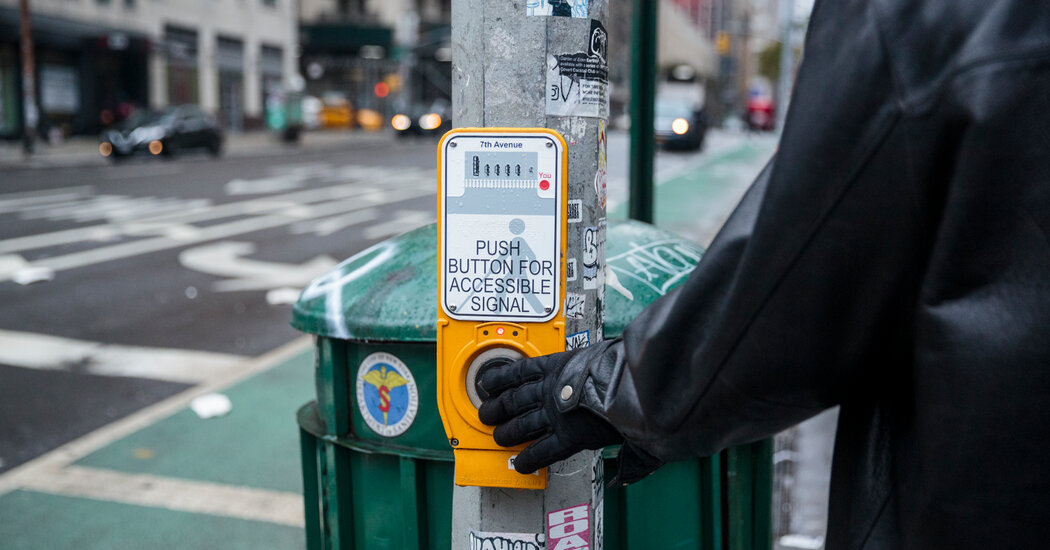 A federal judge on Monday ordered New York City officials to install more than 9,000 signal devices at intersections to make it easier for pedestrians who are visually impaired to safely cross the streets.

In an opinion released Monday morning, Judge Paul A. Engelmayer criticized city officials for failing to make the vast majority of New York’s more than 13,000 intersections safe for thousands of blind and visually impaired residents. He ordered the appointment of a federal monitor to oversee the installation of the signal devices, which use sounds and vibrations to inform people when it is safe to cross a roadway.

The ruling will change the face of New York City’s street corners, the vast majority of which are only governed by visible cues like flashing countdowns, red hands and walking figures. It also marks a significant advancement for disability rights in major urban centers, many of which have not fully embraced accessible crossings for blind residents.

“There has never been a case like this. We can finally look forward to a day, not long from now, when all pedestrians will have safe access to city streets,” said Torie Atkinson, a lawyer for the American Council of the Blind and two visually impaired New Yorkers, who filed the suit. “We hope this decision is a wake-up call not just to New York City, but for every other transit agency in the country that’s been ignoring the needs of people with vision disabilities.”

Nick Paolucci, a spokesman for the city’s Law Department, said that the ruling acknowledged the “operational challenges” the city has faced in its attempts to install the systems over the years.

As Mayor Bill de Blasio prepares to leave office, we look back at his performance on some key issues.

“We are carefully evaluating the court’s plan to further the city’s progress in increasing accessibility to people who are blind and visually impaired,” Mr. Paolucci said in a statement.

The case, which was filed in 2018, accused the Department of Transportation and Mayor Bill de Blasio’s administration of violating the Americans with Disabilities Act, making roadways treacherous for those who cannot see. Last October, Judge Engelmayer ruled in the plaintiffs’ favors, saying the city had violated the law hundreds of times by failing to install accessible signals.

While the city ramped up installation after the lawsuit was filed, it still lagged far behind the pace needed to make its infrastructure widely accessible for blind residents, the judge said, adding the city’s decision was not rooted in financial concerns or logistical hurdles but in political will and budgetary priorities.

The failure to install the technology more widely, the judge wrote, impedes the independence of people who need them, by making it difficult to cross streets safely in a timely fashion.

Accessible pedestrian signals, or A.P.S., are present at less than 4 percent of city intersections. They communicate when it is safe to cross through voice recordings, beeps and other sounds. They also vibrate to communicate to deaf and hearing-impaired residents.

Despite being seen as critical safety measures, the devices have not been embraced on a large scale in New York, the country’s densest city, where around 2.4 percent of residents are visually impaired. The first accessible pedestrian device was installed at a city intersection in 1957, but the rollout in the decades since has been halting. Current estimates say that nearly 65 years later, the city has installed fewer than 1,000 of the devices.

“On a daily basis I have to deal with trying not to get hit by cars because there is no A.P.S. telling me when it is safe to cross,” Christina Curry, who is deafblind, a term used to describe someone with combined hearing and sight loss, and a plaintiff in the lawsuit, said in a statement. “Installing so many A.P.S. over the next 10 years means that I and tens of thousands of deafblind New Yorkers will have access to street crossing information and be able to travel safely, freely and independently throughout the city.”

Blind residents and advocates for people with disabilities celebrated the ruling, noting that the pandemic is changing pedestrian and traffic patterns that blind residents often relied on to navigate streets and sidewalks.

“The ability to have access to an accessible pedestrian signal is even more important now than it was two years ago,” said Lori Scharff, the former president of the American Council of the Blind in New York. “In my lifetime, the generation after me, everybody’s going to have access.”