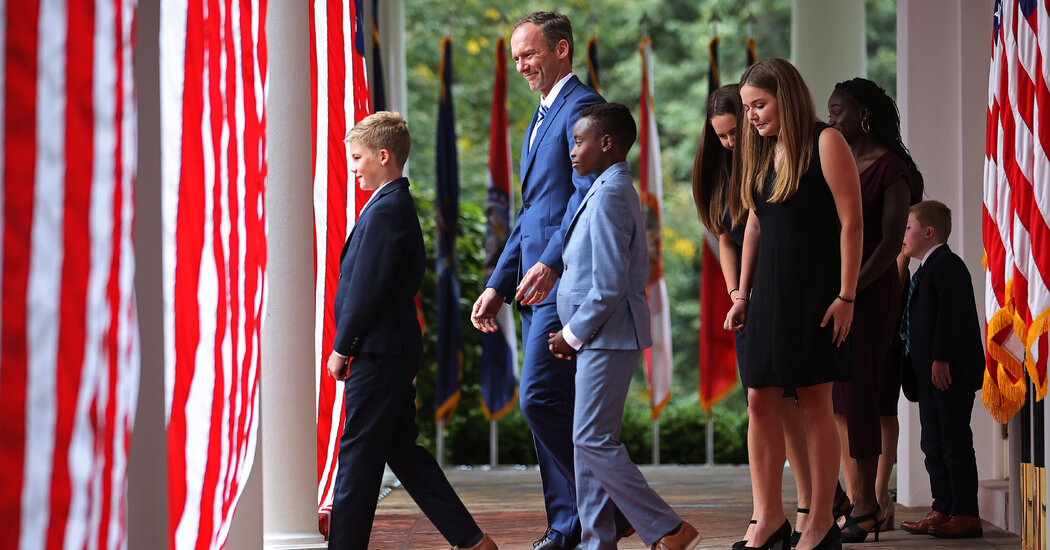 In the Christian tradition, icons are meant to remind flawed humans of what they could become. Paintings of Jesus, the Virgin Mary and the saints remind the devout to aspire to holiness and sacrifice in their daily lives. Meditating on an icon can be a form of prayer: Lord, make me more like them.

Amy Coney Barrett, whose Supreme Court confirmation hearing began Monday, is a living icon for conservative Christian women. Judge Barrett has combined the dual pathways of motherhood and career into one, showing that both can be holy vocations.

Her judicial record holds out the renewed possibility of a conservative Supreme Court majority for decades; her role as a mother of seven, including two adopted children and one with special needs, is a testament to the ways her pro-life views bear out in her personal life.

Since President Trump announced his plan to nominate Judge Barrett, many conservative Christians have thrilled at the possibility of her symbolic power in the culture wars. Anti-abortion groups such as Concerned Women for America and the Susan B. Anthony List are campaigning on her behalf, while Senators Josh Hawley, Marco Rubio and Ben Sasse have defended her faith against what they see to be anti-Christian bias.

To her champions, Judge Barrett represents a new form of feminine strength — living proof that women are strong enough to have both a career and children, and that abortion may in the end primarily serve to let both men (sexual partners) and The Man (discriminatory workplaces) off the hook when it comes to pursuing true gender equity.

So it’s worth asking: If Judge Barrett’s Catholic faith and indisputable career accomplishments make her such a young heroine of the Christian right, why doesn’t the traditional Christianity to which she adheres encourage more women to be like her?

To be clear, few in even secular communities can be like Judge Barrett. Most Americans do not enjoy the privileges of class and elite education that she has had as a federal judge and legal scholar. A flexible workplace and supportive spouse — things many men take for granted — remain elusive for many women.

But there’s another reason few Christian women can simultaneously pursue career ambitions and family life in the ways Judge Barrett has: In traditional Christian communities, women are often asked to sacrifice the former at the altar of the latter.

Research for a book I wrote about the roles of Christian women suggests that Judge Barrett is the exception, not the rule, to traditional Christian teachings on women’s work and vocation. Most of the 125-plus women I interviewed over two years said they had heard from a peer, pastor or professor that being a wife and mother was, by God’s design, their highest calling — and that a career would distract from that. As such, many Christian women with professional ambitions feel less than Christian, or woman, if they follow those ambitions in the way that Judge Barrett has followed her own.

If second-wave feminism denigrated the work of caregiving, many Christian communities over the past 50 years have responded by imbuing motherhood with a holy glow. (Visit an evangelical church over Mother’s Day weekend and you might be blinded by it.)

To be sure, many of the women I interviewed did feel called to have children. But they also felt called to start a nonprofit, go back to school, organize politically or interview for the role of C.E.O. Yet only the call to pursuits outside the home prompted shame.

That shame is powerfully enforced from without. One young woman I interviewed excitedly told her pastor that she had gotten into law school. The pastor responded that she should consider that no Christian man would want to marry a lawyer. On her first visit to a Seattle megachurch, a female advertising director heard the pastor preach that he didn’t know any women who worked outside the home. An older Christian woman told me at age 27 that if I continued to invest in my career, I would lose the chance to marry and have children — and that I better make my choice soon.

These attitudes play into the notion that “good” Christian women can be only one thing. (They also understandably raise questions about Judge Barrett’s own faith community, the People of Praise, and its teachings on male headship.)

Traditional Christians believe that God designed men to be leaders in the church and home, and that women are to submit to male leadership in these spheres. This explains why many Christians have a hard time encouraging women to take on jobs and careers where they will wield authority over men. If a church teaches the essence of femininity is godly submission, it is difficult to then, in turn, encourage women who are called to lead and hold authority at work. In 2017, the evangelical polling firm Barna Group found that of all Americans, evangelicals were the group least likely to be comfortable with a workplace comprising more women than men. They were also the group least likely to believe that women face barriers at work.

Judge Barrett herself shows that women can be many things at once: an accomplished student, law professor, judge, mother, spiritual leader, wife and, in her words, “room parent, car-pool driver and birthday party planner.” At a 2019 event, she said this wouldn’t be possible without a husband who is “a complete all-in partner” in raising children and running a household. Elsewhere, she has described an office and courtroom culture that has welcomed her children’s presence.

Judge Barrett is set to become the most visible conservative Christian woman in public life since Sarah Palin, who once responded to questions over her work-family balance with the following: “To any critics who say a woman can’t think and work and carry a baby at the same time, I’d just like to escort that Neanderthal back to the cave.” (I imagine Justice Ruth Bader Ginsburg would have agreed.)

But if a generation of girls is to follow in Judge Barrett’s footsteps, they will need explicit support from religious leaders. As such, evangelical and traditional Catholic communities must find ways to honor and affirm the ambitions of half their members.

They could do so by teaching the dignity of “secular” professional work at all levels; by publicly advocating generous pro-family workplace policies; by confronting sexism and sexual harassment outside the church as well as in; and by calling men to champion their wives’ careers and to share family duties.

But while many Christian leaders would affirm these as goals, it would take nothing less than a reversal of church-based gender norms for a groundswell of Christian men to put their wives’ careers first and to take a primary caregiver role in the way that Judge Barrett’s husband has.

It’s been disheartening to see so much religious illiteracy applied to Judge Barrett’s personal life in recent weeks. We might hope for journalists to look beyond dystopian novels to decipher what a “handmaid” is, for instance. But to set the record straight, on handmaids and beyond, conservative Christians must do their part to imagine a broader and more humanizing vision for women’s place in the public square. Christianity has always contained a liberatory seed: one that tells women that the human desire to work, create and shape institutions is as important, even as holy, as their ability to bear children. If Christians don’t like the handmaid stereotypes, now is the time to be clear on all that Christian women can do and be.

Katelyn Beaty is the author of “A Woman’s Place: A Christian Vision for Your Calling in the Office, the Home, and the World.”